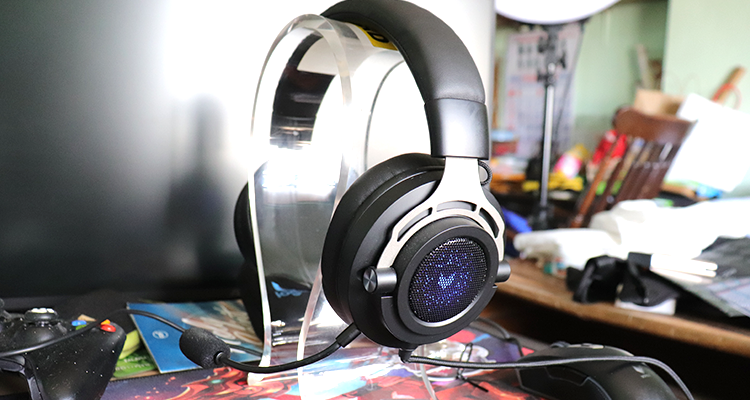 We reviewed Rapoo’s VH510 headset a couple of months ago, and while we did have a couple of praises for it, we still felt there could be so much more done, especially in the audio department. Fast forward to the tail end of 2019, and we now have the VH300 in our hands. It’s definitely a step up in terms of design and audio quality, but it still has some of the problems we’ve encountered with previous Rapoo headsets we’ve tested here before.

Right out of the box, I’m a bigger fan of the VH300’s overall look than the 510’s. The move to give the former a simpler look without too many bells and whistles was a good one, and results in the headset itself sporting a more mature, sophisticated look. The cool blue LEDS built into the headphones and mic add a touch of light to the proceedings, but outside of that, the way the headset looks can carry itself.

Like we said last time, looks can only do so much if you can’t back it up with quality sound. And with that said, we’re glad that the VH300 delivers in that department. These headphones pack an overall fuller sound than its predecessor. The treble on this one got significantly dialed back and the bass got a nice, unobtrusive boost this time around, however, it’s mid range that needs a bit more tweaking. Despite that last little nitpick, the sound quality is a huge step up from the last time.

If there’s one thing we can really count Rapoo to deliver on, it’s the quality of their microphones. It performs exactly like the VH510’s, and that’s a good thing. I’ve streamed a couple of times using it and the end result sounds good. It’s no condenser mic, not by a long shot, but if you just need to get your voice in your stream, this one’s a pretty good deal.

If you happen to have a PlayStation 4, the VH300 makes for a serviceable headset for it, too. Volume’s also a little better compared to the VH510, and guess what? It has in-line controls now! It’s got toggles for the mic, LEDs, and a mute button, which thankfully sidesteps the need to turn the volume down to zero. It’s a neat little addition which honestly become standard in headsets in this price range. And while the in-line control box feels just a tad flimsy for our liking, feeling a little on the light side and could’ve been built a little sturdier, we’re glad that it’s here.

We have to commend Rapoo for the improvements they made to their VH line in what we’ve seen and heard from the VH300. The build and overall sound quality more than justify its existence. They haven’t completely knocked it out of the park with this one yet, but it’s a much-needed step in the right direction and we’re eagerly looking forward to what they might have in store next.

You can purchase the headset at around 2,499 php.