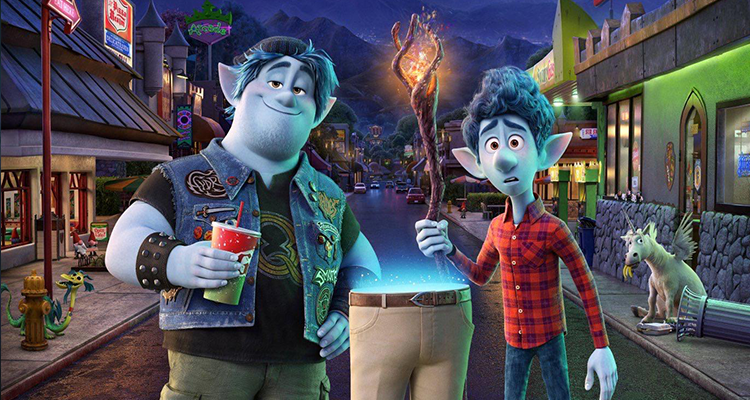 A family-friendly tale of two brothers. One is a social misfit because of his overzealousness as a historical/heritage-lover, while the other is a socially-awkward teenager in search of a father figure. Living together with their single mother, who has a police officer as her boyfriend, this could easily be just another teenaged “coming-of-age” style movie. And in a certain sense, it is, with the significant difference of the world being populated completely by fantasy races and beings – a world where technology has pushed magic aside to the edges of historical trivia.

Ian and Barley Lightfoot, our duo-protagonists, are voiced by Tom Holland and Chris Pratt respectively, who a very lively dynamic with each other. As supporting cast, Laurel Lightfoot (Julia Louis-Dreyfuss) and Corey (Octavia Spencer) are a very interesting pair of ladies – the suburban elf mom and the ex-adventurer/quest giver manticore turned restauranteur (those were a mouthful). Where Ian and Barely explore the concepts of family/fatherhood and their society’s heritage (magic), Laurel and Corey‘s moments also develop those elements even further as they showcase a world that has abandoned their history.

But in my opinion, where the movie really shines is in its visuals and depiction of a suburban neo-fantasy world. Seeing a world without humans, fully populated instead by elves, centaurs, pixies, and other similar creatures living in “modern” times is quite an experience. There are moments of really beautiful imagery and detail, to be fair, which help to flesh out a setting which has yet to be tapped out, the urban fantasy.

As a single movie, Onward is chock full of cheesy moments and spectacular visuals. Although it seems to lack the emotional impact of hits like Toy Story, it’s still a thorough treat of a film, which pays homage in an immense way to the fantasy genre built by Lord of the Rings and D&D. But what’s more interesting is the depth of the setting’s concept and the world building seeded into it, which can easily lay the grounds for additional movies or spin offs, which I admit I would hardly be adverse to.