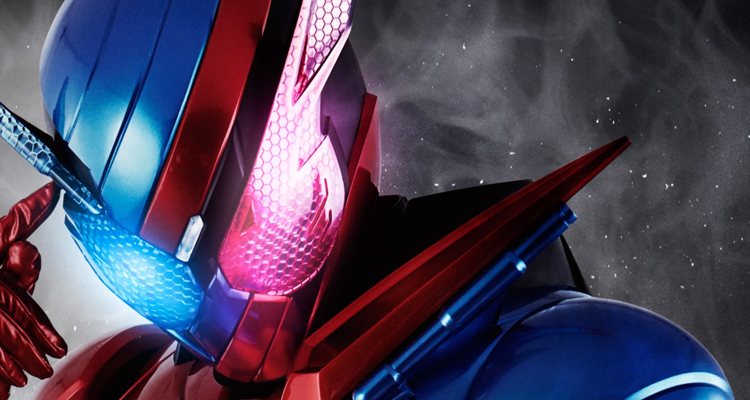 The Kamen Rider franchise has no shortage of video games to its name. The latest outing, Kamen Rider: Climax Fighters takes the long-running tokusatsu series to the arena fighter genre after a pair of Dynasty Warriors-like games in the form of the Battride War subseries. Spanning all of the Heisei series up to the currently airing Kamen Rider Build, is Climax Fighters the game fans of the bug-eyed jump kicking superheroes have been looking for?

It seems like the arena fighting game is one of the go-to genres when adapting nearly any action-oriented property from Japan these days. When you have characters with distinct, over-the-top abilities that fight and your fanbase almost always wants to take control of them and re-enact those battles, it’s not hard to see why so many companies go with this route. When done right, you get stuff like the Naruto Ultimate Ninja Storm series. Otherwise, you get the multitude of forgettable anime-based arena fighters that were all over the PSP and Wii during their heyday. Climax Fighters does the unenviable job of landing right smack in the middle of those two extremes, with maybe a few good points tipping it over to positive territory. 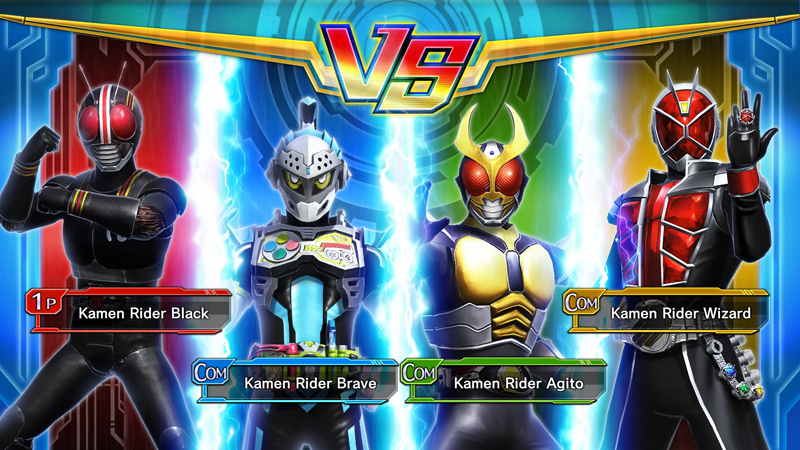 Let’s get this out of the way before anyone asks about it. There is not story or overarching plot in Kamen Rider: Climax Fighters. There’s no particular motivation for all the Riders to go around kicking each other and no Big Bad for them to inevitably unite against. The closest that you get is probably just seeing Kamen Rider Build meet all his Heisei-era predecessors and fight them. It’s a shame, really, because when crossovers like these happen on TV or in their movies, they’re usually something to get giddy over. Here, players are served with a bit of pre-battle dialogue which, while generous with winks and nods to the source material, brings very little to the proceedings. When even the Battride War games somehow had plots, it makes you wish there was more done in this department.

The rest of the game follows the “serviceable, but you really could do more” structure from here on out. Let’s start with combat. If you’ve played any arena fighter based on a popular Japanese series over the past couple of years, then you more or less know what you’re in for. The game drops you and up to three other Riders into arenas of varying sizes where you proceed pummel each other til one (or one team) is left standing. You’ve got your regular attacks, which can be chained into each other or into heavy attacks/specials, known as Rider Arts in this game. You also have two special gauges to look after throughout your fight, the Skill and Evolution Burst Gauges. Skills in Climax Fighters range from alternate forms to one-off attacks that deplete the entire gauge. Evolution Burst is every Rider’s trump card — filling it up and through taking and dealing damage gives you access to their respective final forms by tapping the PS4 touchpad and subsequently, their finishers with a second tap of the touchpad. Knowing when to put your Skills and Evolution Burst play a huge part in determining victory, with the latter rendering you nigh invincible, with only other Burst-fueled attacks able to hurt you.

Fights are fun and frantic ones you get past the initial hurdle of learning each character’s strengths and weaknesses. The relatively simple control scheme helps ease players in, alongside an easy-to-digest collection of tips hidden within the game’s Gallery mode. The presence of intricacies such as chaining Rider Arts such as Den-O’s multiple forms and dash canceling out of them are a welcome sprinkling of depth into an otherwise barebones fighting game. One glaring issue present in fights involving more than two characters is the use of large, tacky targeting arrows to indicate who’s targeting who and vice versa. They look obtrusive, and for people with much lower tolerance for these design elements, can pretty much take you out of the game. You may also have to contend with an occasionally wonky camera that has a hard time following the action in single player and pulls back out a bit too far during multiplayer matches.

Now, on to the fighters themselves. Climax Fighters’ roster consists of every main Heisei-era Kamen Rider up to Build, some secondary Riders, mostly pulled from the more recent shows, and Kamen Rider Black, simply by virtue of being Kamen Rider Black. While it’s cool to see how diverse and varied the looks and ability sets of every main Kamen Rider starting from 1999’s Kamen Rider Kuuga, the absence of nearly half of this era’s secondary Riders like Garren and DiEnd is a sore spot. Here’s to hoping they get added as either DLC or fully integrated into the next entry, though the latter would definitely be more preferable at this point. 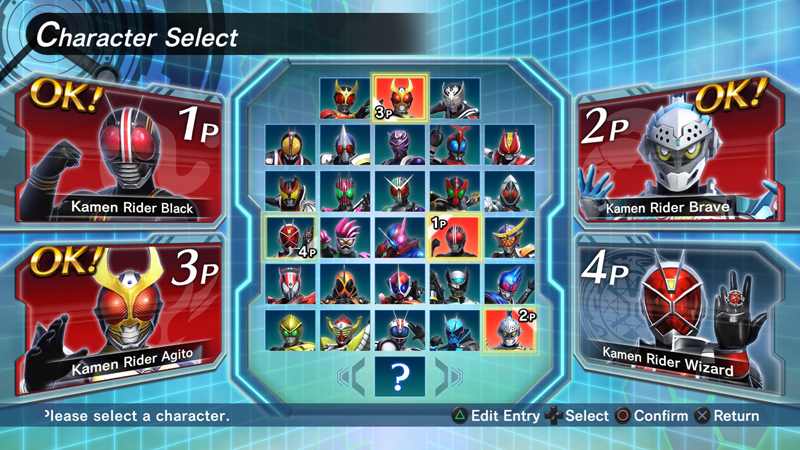 There’s not much to write home about regarding Climax Fighters’ presentation, either. While the Riders the entire cast is rendered handsomely, the more armored-looking ones like Gaim, Den-O, and Blade look like they’ve had more work put into them. The stages are mostly empty, with some including obstacles and varying elevations thrown into the mix. As barren as they are, there’s some dynamic lighting which thankfully affects all present characters, which is a nice touch. The aural front won’t win any awards anytime soon, either. The soundtrack is mostly forgettable, but should be adequate for getting you in the mood to fight. As for sound effects, hits lack a certain punchiness to them and the Rider voices are hit-or-miss. The ones that do stick the landing, however, are the attack sounds and belt voices, which are spot-on. The downside to all this is that’s highly likely you’ll get tired of hearing all these get spammed after a couple of hours and decide to put something else on for your ears.

Expect to spend a weekend at most on Climax Fighters. The aforementioned lack of an overarching story is highlighted by its Mission Mode, which starts you off with a series of tutorials and eventually throws you into fights as various Riders. The battles range from 1-on-1 to 2-on-2 team battles. You’ll get the occasional 2-on-1 fight, usually as Build versus another series’ main Rider with his secondary in tow. The AI in these fights is prone to rubberbanding and we won’t blame you if you resort to cheesing your way through them. A Free Battle mode is present for when you want to throw down with up to three friends. An online mode is present, of course, but we really can’t guarantee you’ll find much competition there. As of this writing, we’ve had no luck of getting into matches either through ranked matchmaking or lobbies. Finally, there’s a gallery that lets you view unlocked artwork, listen to the game’s soundtrack, and customize your in-game avatar with the cast’s masks and belts.

If you’ve got a Kamen Rider-shaped itch that needs scratching, Climax Fighters should be just what the doctor ordered. Its core fighting mechanics will make for a fun afternoon with fellow fans of the franchise, but those looking for something with a little more meat on their arena fighting games might as well look elsewhere. We’d like to believe the devs at Eighting are on to something really cool here and deserving of Kamen Riders’ long, storied history, we just hope they’re given a better budget and more development time on the next outing. 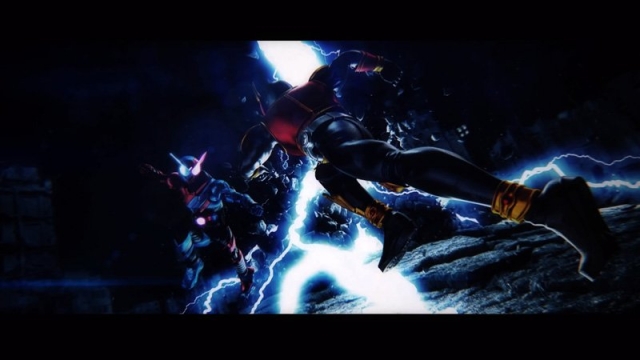 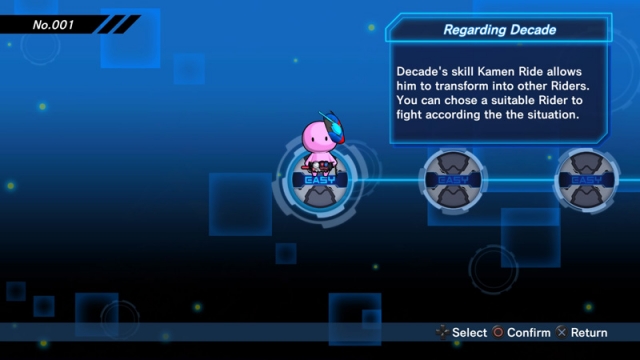 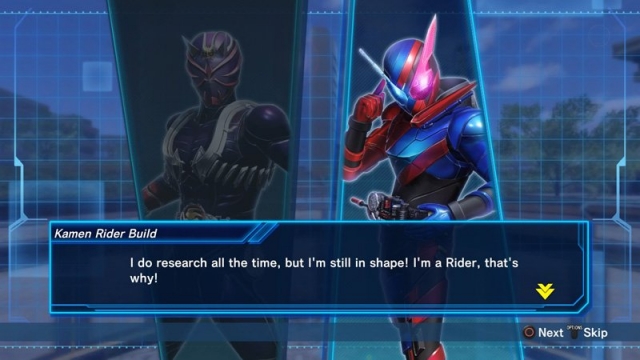 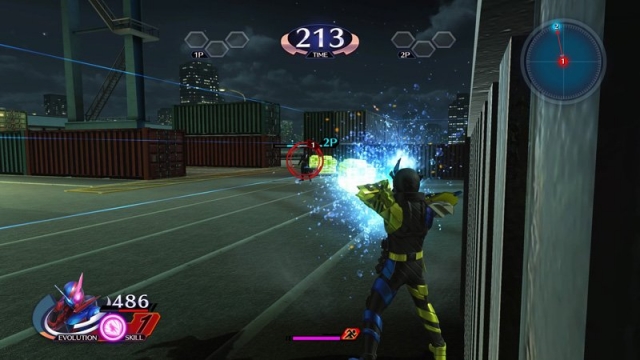 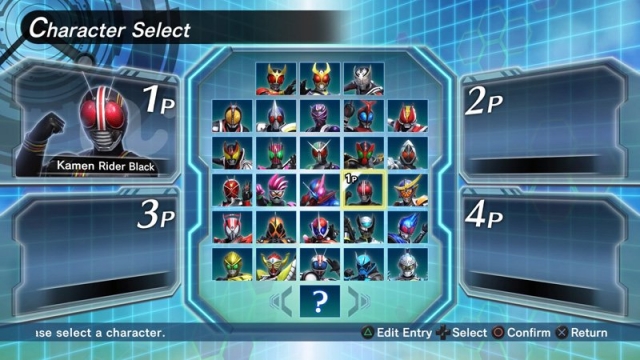 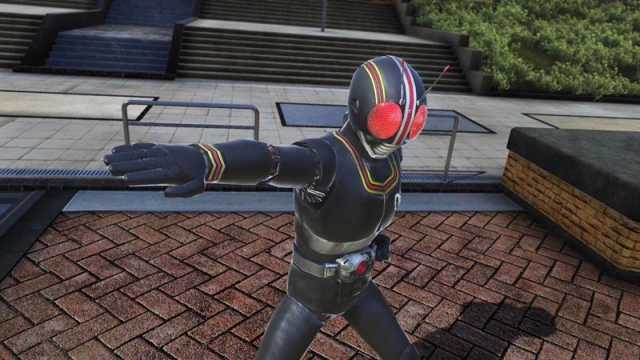 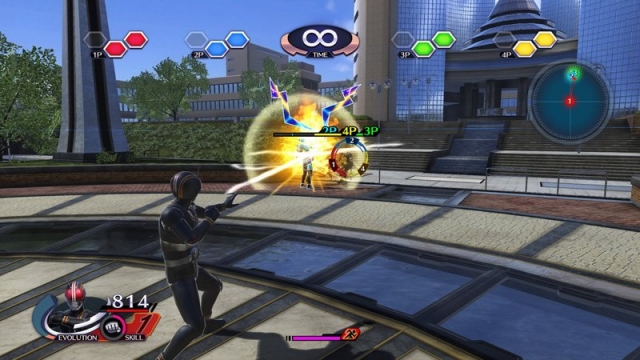 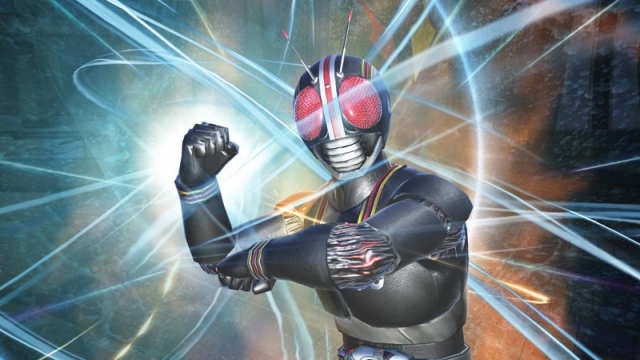 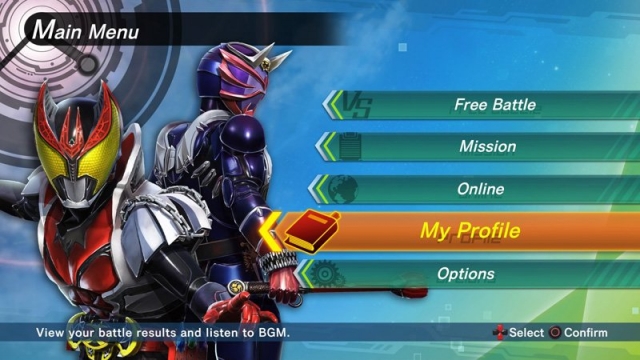 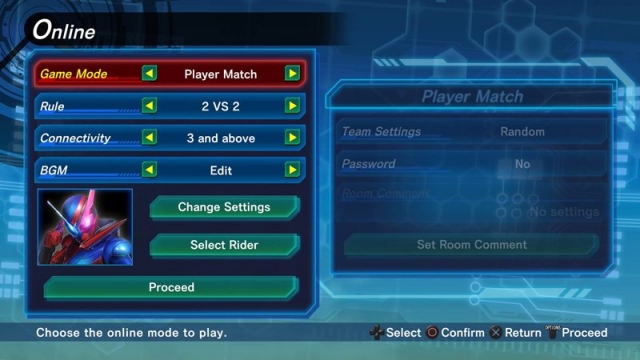