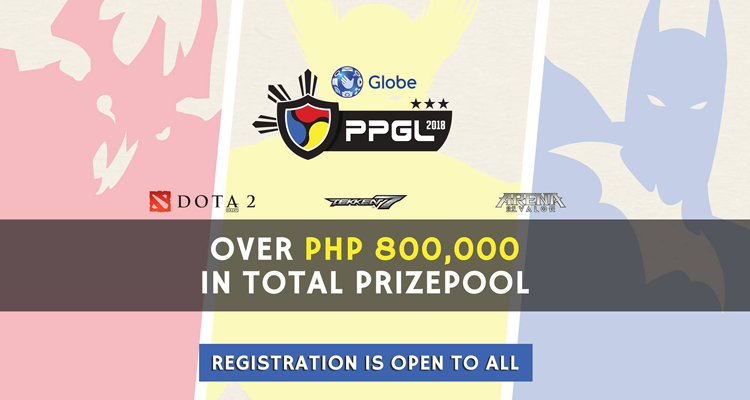 Globe partners with the Mineski Events Team (MET) to organize the Globe Philippine Pro Gaming Leauge (PPGL) 2018, a nationwide esports tournament featuring three games from three platforms, Dota 2 for desktops, Tekken 7 for console, and Arena of Valor for the mobile.

The Globe PPGL 2018 is set to be the biggest multi-title esports league in the Philippines and aims to be a milestone for the country’s eports industry amidst the already troubled scene especially with the recent Valve support pullout of Galaxy Battles II.

Globe is once again embarking on a pioneering effort. After becoming the purveyor of digital lifestyle and redefining how Filipinos consume entertainment, we are set to put the Philippines on the map of gaming and eSports together with MET by launching Globe PPGL 2018, we look forward to taking esports to greater heights, and develop world-class esports talents in the country

Aside from the tournament itself, the Globe PPGL 2018 is also creating a high production serialized documentary that delves into the life stories, daily lives, and personal struggles of participating players. This documentary will be aired on free television.

Meanwhile, the tournament is also aims to bring professional gaming to a wider audience, with the inclusion of other stalwarts in the esports industry, namely the Mobile Esports Arena (MESA) and PlayBook Esports.

The first round of the tournament is already starting in a few days with the Mindanao qualifiers happening Mineski Infinity branches in the area. Tournaments will be streamed live and after a series of qualifiers happening all-throughout the year, the finals will be a live LAN event for the three games. As an added incentive, the champion of the Dota 2 Leg will also advance to a Southeast Asian Dota 2 tournament involving champions of other national esports leagues across the country.

For more info, you can check out the Globe PPGL 2018 fanpage.

Meanwhile, you can check out the qualifier schedules for the tournament right here: