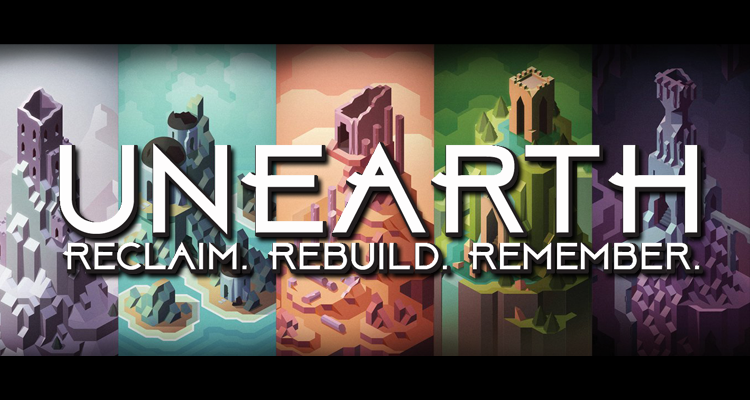 Unearth is the newest game of Brotherwise Games, The company that gave us the hit dungeon building game Boss monsters. Unearth is a 2-4 player dice placement game where players take control of their own different colored tribes who are excavating and unearthing the many different ruins buried under the earth.

Each player is given one of four different colored sets of dice, which are comprised of one four-sided die, three six-sided dice, and one eight sided-die. These represent your tribes people who are excavating the ruins. Apart from these dice, players are also dealt out 2 delver cards, and a Ruins card to keep hidden from the other players. Once the ruins cards have been dealt out 5 ruins will be randomly taken out of the game, and one of five end of age cards will be added to the bottom, this will make your ruins deck. Next players will draw and reveal 5 cards from the deck and add the corresponding amount of stones as shown on the bottom right of the Ruins cards. Apart from Ruins cards, there are Wonders cards to be place out on the board as well. There are 3 types of wonders, Lesser, Greater, and Named Wonders. In addition to the Lesser and Greater wonders, players will also be drawing (number of players + 2) Named wonder cards which will be available to all players to make for the rest of the game.

Each player turn there are 2 phases, the Delver Phase and the Excavation phase in that order. On the Delver phase players can play any number of Delver cards before moving onto the Excavation phase much like how one would prepare specialized equipment to make their mission easier to accomplish. Next comes the Excavation phase, which is the meat of this game, in this phase the active player must choose one of the five ruins he wishes to excavate before they roll their die. Higher rolls makes it easier for the player to take the ruin card, but its not the only thing in this game. Rolling low also gives its own advantages. If a player rolls a 1, 2, or 3 the player can take one of the stones on the card and place it in front of them arranging in rings. Once a player has made a ring of six stones they can add a wonder in the middle of said ring depending on the composition of the ring. If a player makes a ring of different stones it makes a Lesser wonder. If the ring is made of the same stones then the player may add a greater Wonder which is worth more points. There are also Named wonders which have more specific combinations required, They may not be worth as much points as Greater wonders, but they give other effects in the form of abilities like additional point for every yellow stone, or take a ruin from the 5 that were taken out of the game. This game goes on until players have successfully excavated the last Ruin. Points are then calculated based on the ruins, and wonders built. 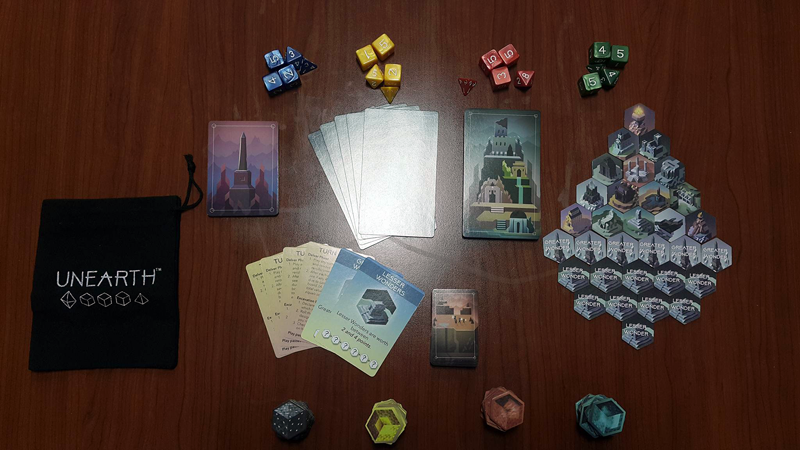 The game sports a vector style artwork, which is what initially led me to buy the game. It’s a great looking display piece. The card stock has a good quality to it, and doesn’t feel like it would be easily damaged, considering the different sizes of the cards this makes it harder to find the right sleeves, so this is a great move on Brotherwise games’ part. The dice feel pretty cheap, and it pales in comparison with the rest of the components, but its does its job well so this is just a minor nitpicking from me.

The game has a very strong theme to it, and is very strong in the game as well, with the four-sided die, which I like to call the mason, because he has it easiest gathering stones and building wonders. The game is pretty well balanced for a dice game, and offers delver cards to help players manipulate the board, and dice. apart from the Delver cards they also have the wonders system which helps players who are behind still be relevant, and not get steamrolled. Replayability is great too, with the amount of different named wonders combinations, ruins and stones distribution, every game is always going to be different. One time you could be going for a ruins strategy, and the next you could be doing a multicolored ruins strategy, and of course the game is a great display piece if you aren’t playing it with the wonderful box art, and cards.