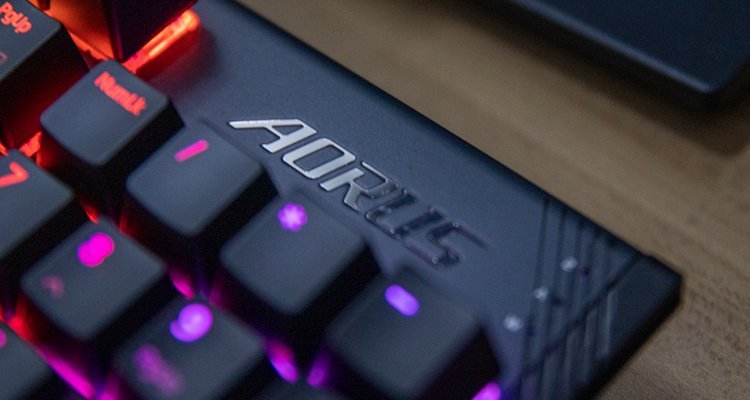 There comes a point in a gamer’s life where all the bling in a peripheral means no more than just gimmicks to up the price. They’re at a point where they’ve tried it all and just want something simple and something that works. It’s a point where they know exactly what they want. Well, Aorus gives them exactly that. The Aorus K1 mechanical keyboard is a simple, straightforward mechanical keyboard. No gamery font, no excessive RGB, no additional buttons other than the ones found in a standard layout. 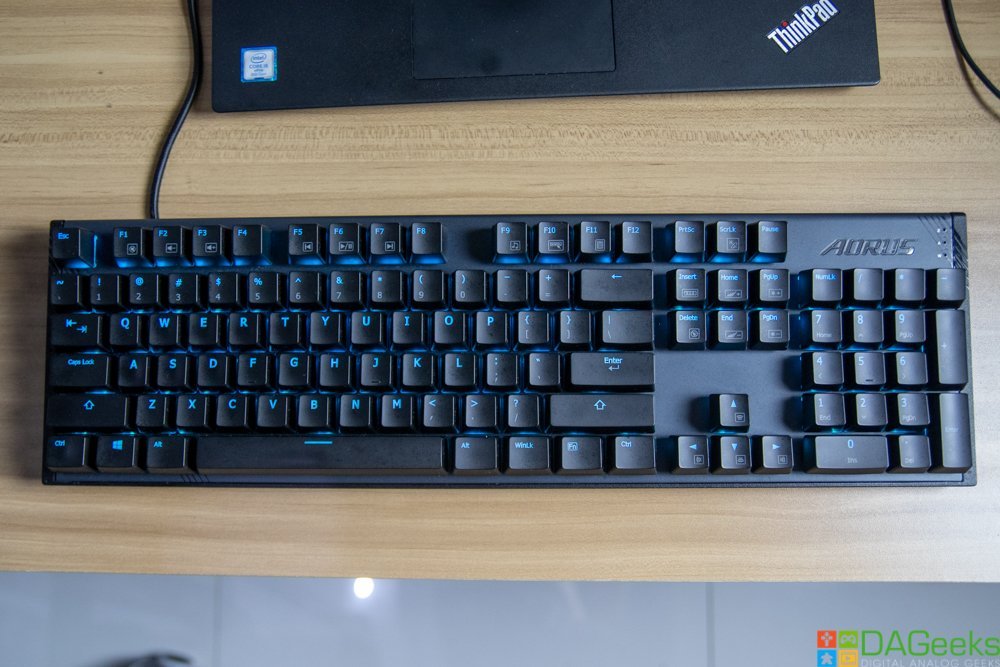 The Aorus K1 is a pretty straightforward 104-key full layout mechanical keyboard. Aorus calls its aesthetics neonpunk with its frameless body and subtle features. It’s 44cm long and 13cm from top to bottom and has a height of around 4cm. It’s frameless and the switches are floating, giving it a clean look and very visible RGB lighting. It weighs around 1.1kg more or less and feels hefty and solidly built. The top plate is made of metal, giving some keys a high-pitched ping when pressed heavily. 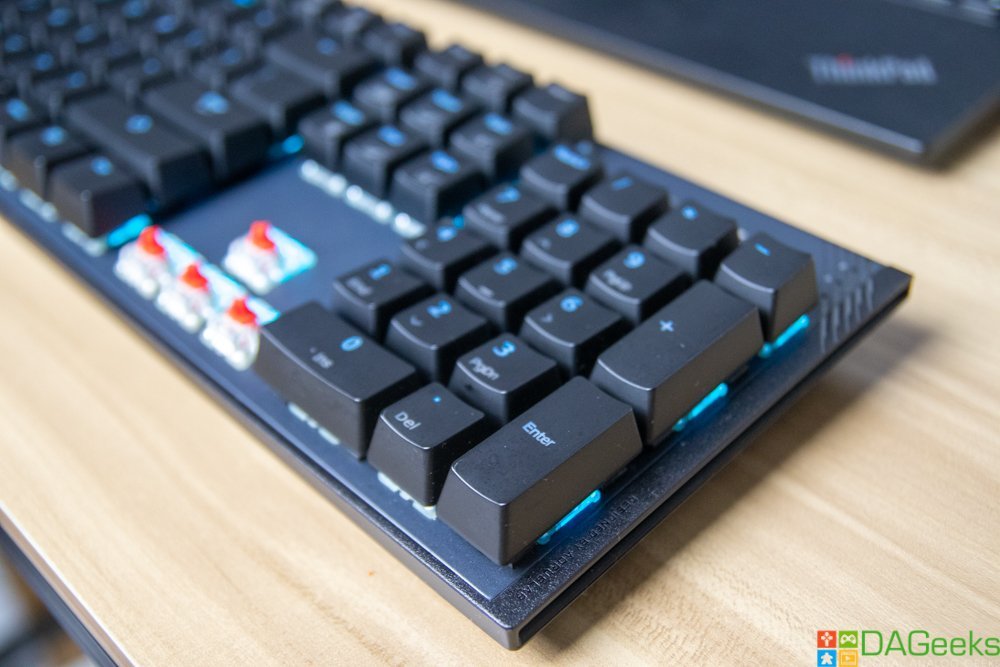 You also get some cable routing underneath which has 3 paths, left, middle and right. It also has 2 feet to angle the top part of the keyboard slightly. Other than that, the underside is a bit plain. 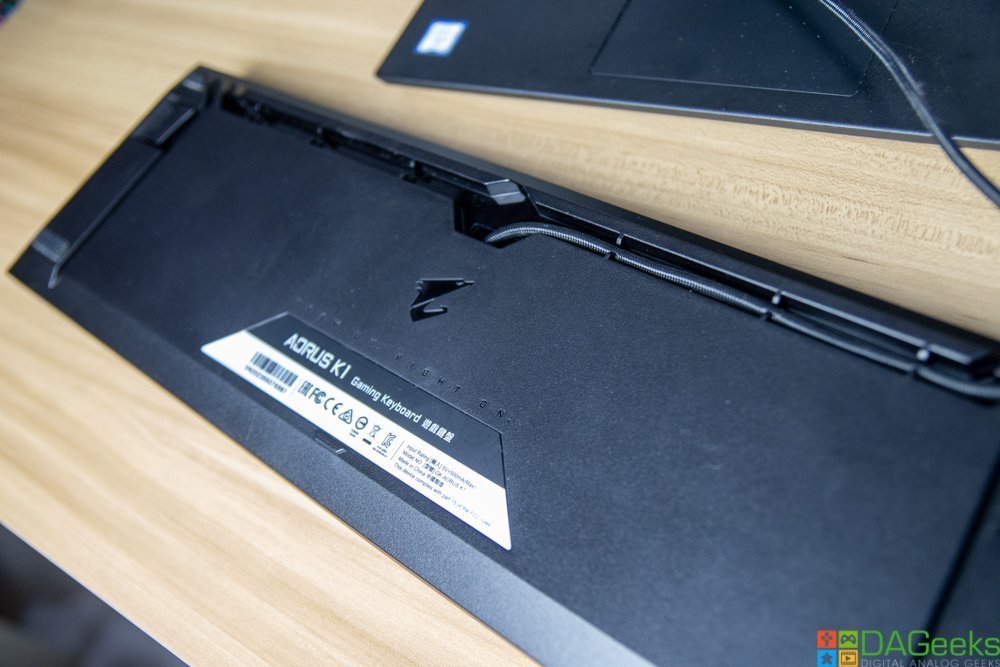 The Aorus K1 has a pretty clean look and would work very well with a variety of custom keycaps. Speaking of custom keycaps, another good thing about the Aorus K1 is that it has a standard bottom row, which means it’s compatible with most custom keycap sets found in the market, a rare thing in “gaming” mechanical keyboards. 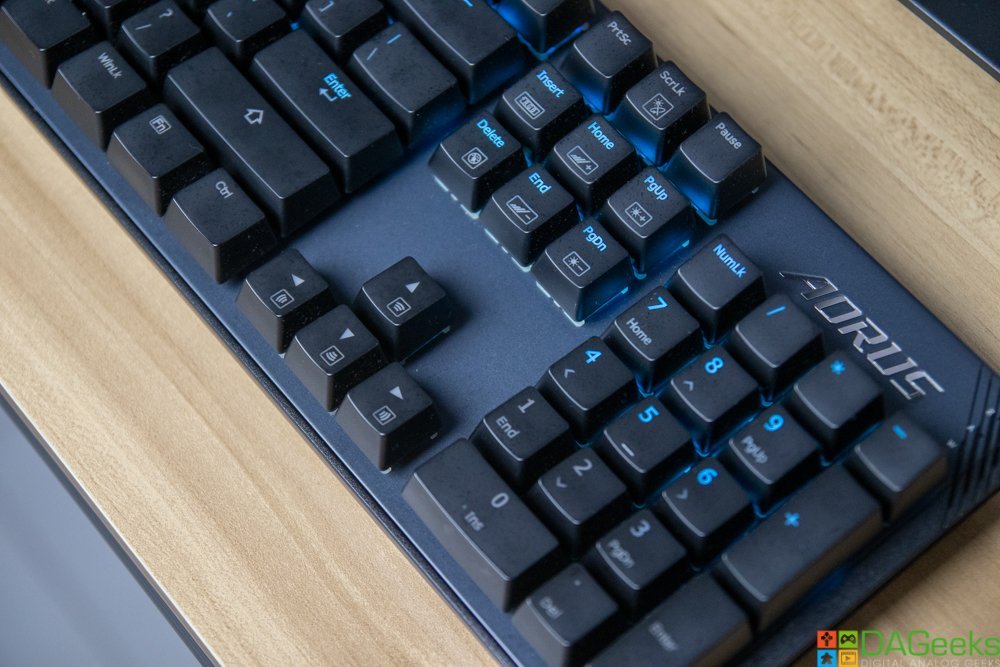 I like how the fonts are simple and easy to read and the keycaps feel very good to touch. There’s also ample light that shines through the characters on the keycaps, making it very useful when typing in the dark. 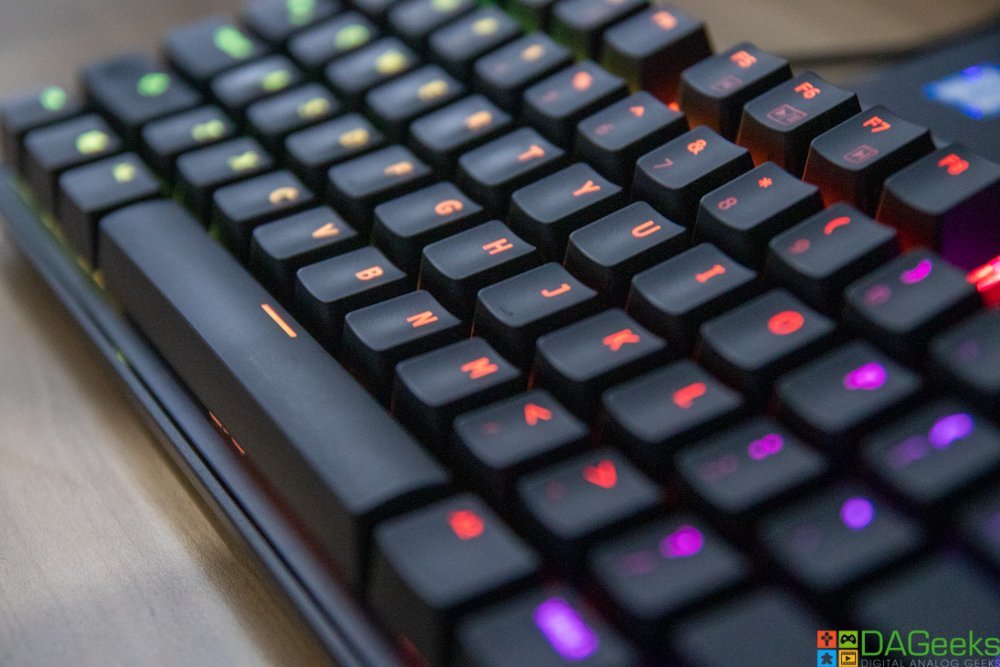 Although there are no dedicated media keys in this keyboard, you’ll find a lot of dual-layer functions in the F keys like mute, volume up/down in the F1-F3 keys and previous, play/pause, forward in the F5 to F7 keys. These can be accessed by holding down the Fn key and pressing the corresponding F key. 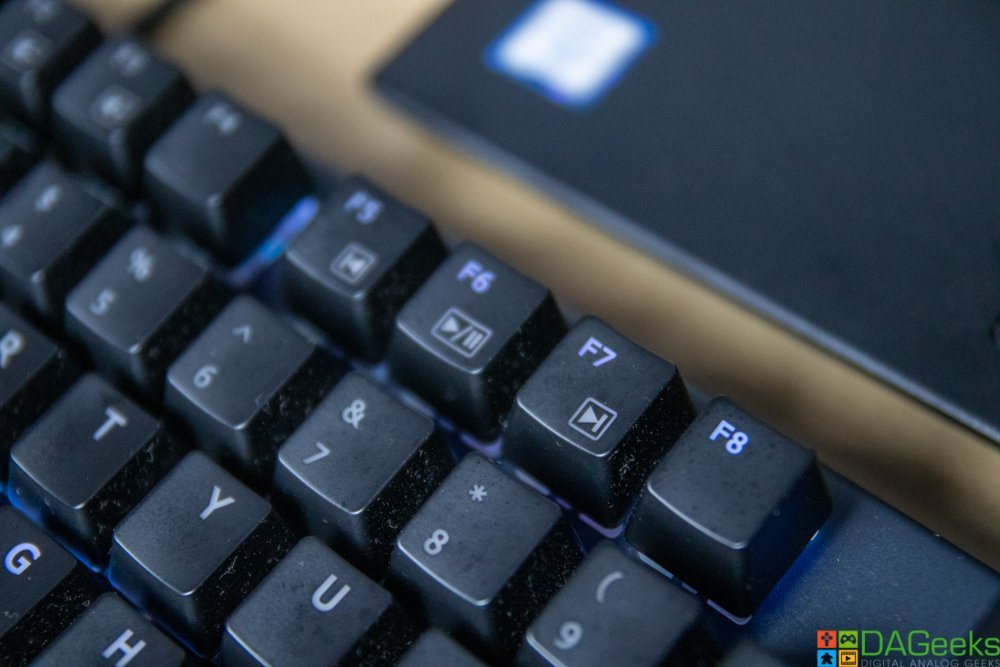 On to the switches. The Aorus K1 comes in Cherry MX Red switches, which is one of the best switches out there for gaming. It has an actuation point of 2mm and bottoms out at 4mm. It’s very light and smooth to game on. I, myself, have been a Cherry MX Blue user ever since but the Reds are slowly becoming a secondary preference. Being a Cherry switch, you don’t have to worry about the durability of these switches.

It’s rated at 100 million keypresses, and trust me, these switches are built like a tank. I have a Cherry MX keyboard that I’m still using to this day, after 8 years of being my daily driver. The K1 also supports USB NKRO, so you don’t have to worry about which key combinations wouldn’t register. 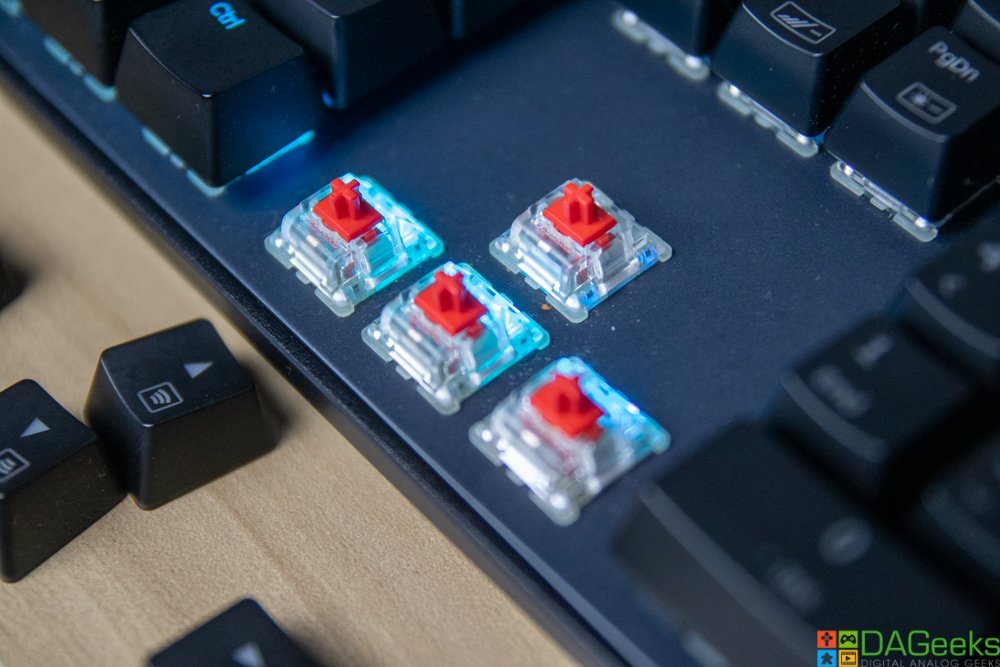 This is where the K1 falls behind its competitors. Its software. To maximize the function of the K1, the user has to download 2 separate softwares, one for remapping the keys and another for controlling the lighting. The Gigabyte Aorus Engine software is used to remap the keys on the keyboard or create custom macros. The RGB Fusion 2.0 app is where you make lighting configurations and you can easily sync it with other RGB Fusion 2.0-compatible hardware.

The good thing about the K1 is it has onboard memory which will save your config in the keyboard itself, saving you the hassle of downloading the app if you want to use it in another machine. 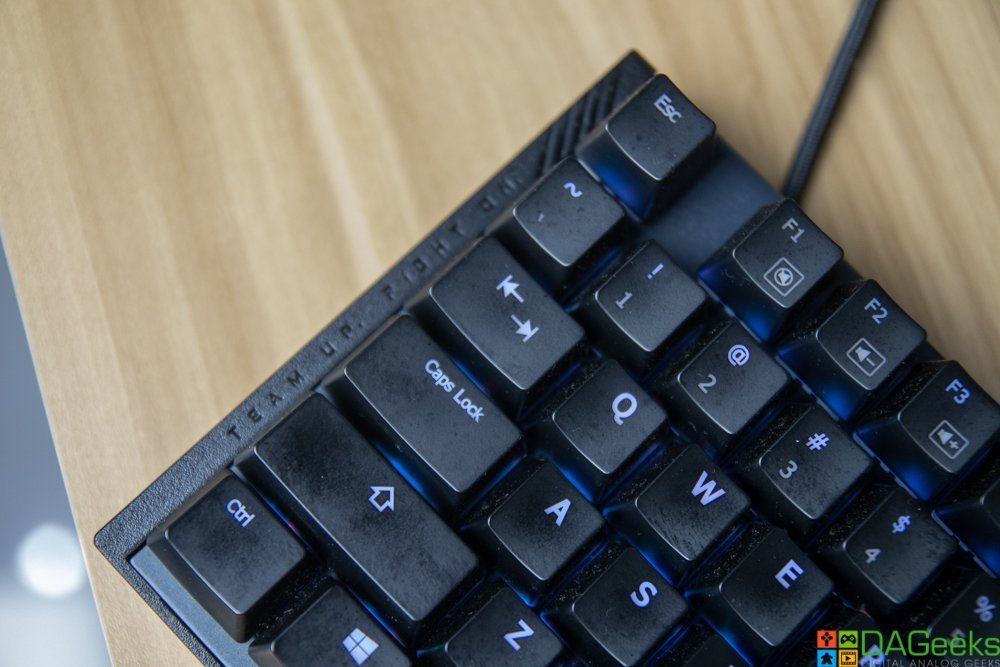 At ₱5,000, the Aorus K1 is a solid choice for a no-fuss, full-sized keyboard. If you’re very particular about your RGB settings, this might be a perfect addition to your arsenal, otherwise, good luck syncing the lighting to your whole setup. Like in buying a headphone or a mouse, it all comes down to personal preference.

You need to feel the keyboard physically and in person to appreciate the build and the switch and the sound it makes if this truly is a perfect keyboard for you. But to be safe, I hope this review gave you an overview of what the Aorus K1 feels like and you’d order one online to keep you healthy and away from any danger.