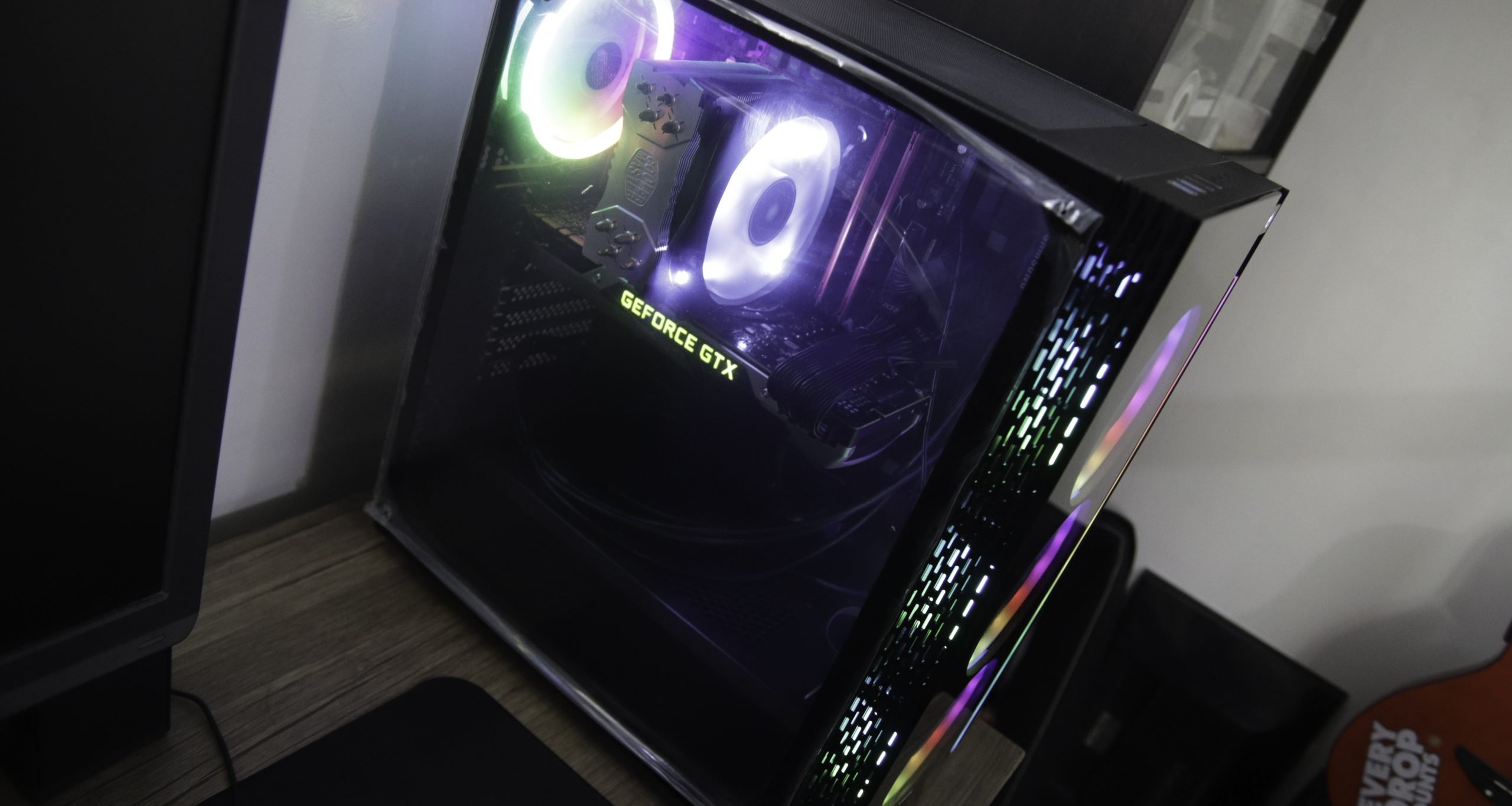 Xigmatek started out in 2005, a fairly young company compared to its peers. Despite being the new kid in town, Xigmatek started to make waves with their cooling solutions. Recently, they have been going toe-to-toe with the giants in PC chassis manufacturing. Xigmatek Philippines reached out to us and lent us 2 of their ATX cases. In this post, we’ll go through the journey of building inside the Xigmatek Poseidon. 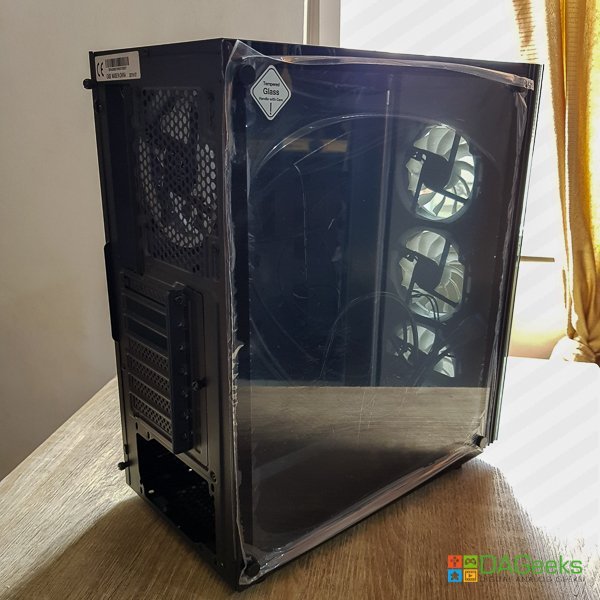 Xigmatek has been generous by packaging the Poseidon with 4 ARGB LED fans right out of the box. Accessories included are: add-on card screws, motherboard stand-offs, motherboard screws, SSD and HDD screws and washers and a couple of cable ties. 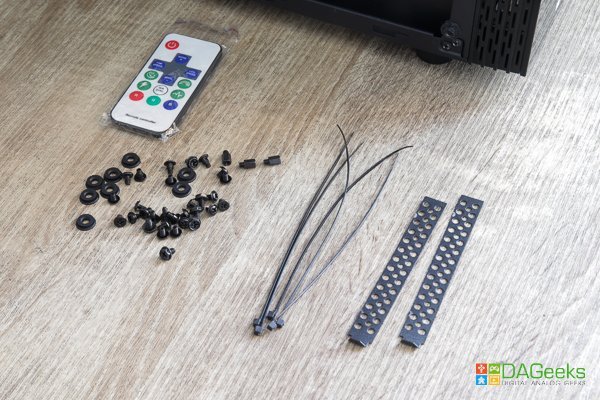 The Xigmatek Poseidon is a mid tower ATX case with a PSU shroud and 2 tempered glass panels, front and side. As I said, out of the box, you’ll get 4x 120mm RGB fans. You can reconfigure or add fans if you please as the top exhaust can fit 2 more 120mm fans. There’s also 2 additional fan slots on top of the PSU shroud. The case is 400mm long, 205mm wide and 450mm tall. With its dimension, it can fit up 360mm long graphics card and up to 165mm tall CPU cooler. As for the build quality, there motherboard tray is a bit thin than I’m comfortable with. Given the price of this case, I expected higher quality materials all around. 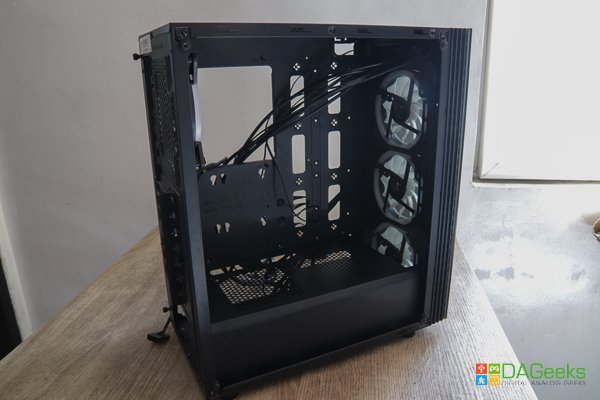 The front panel is tinted tempered glass which makes for a cool effect paired with the RGB fans and the RGB stripe accent on the side. You also have the power button and reset button 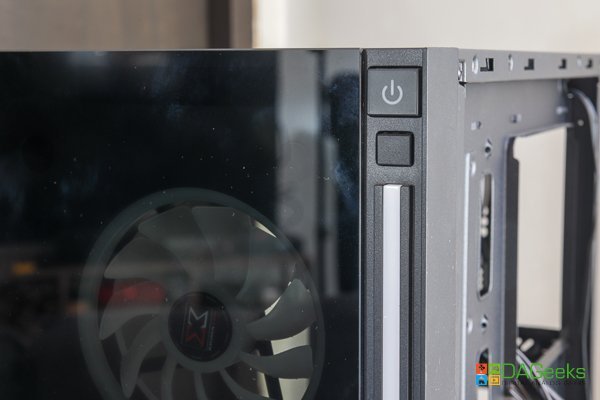 On top, you have 2x USB Type-A 3.0 ports, 2x USB Type-A 2.0 ports, headphone and mic ports, and what’s supposed to be a button to control the RGB leds. There’s also a magnetic dust filter here and one at the bottom to keep your components free from dust. 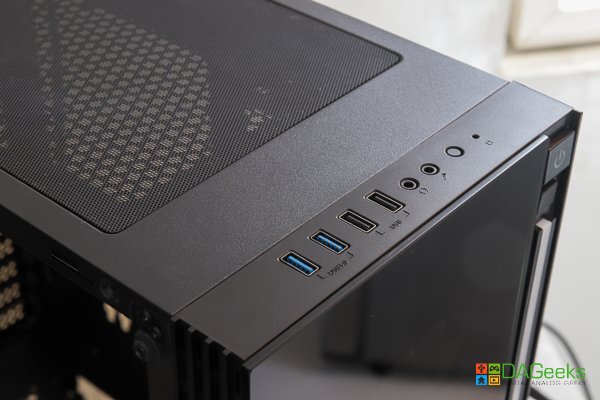 On the back side, you can see the PSU compartment. Do note that it can only accomodate up to 170mm long PSUs because there’s an HDD caddy in front of it. Excuse the spaghetti of cables, that’s what happens the more fans you install. The Xigmatek Poseidon do have cable tie slots for better cable management, which I’ll discuss later. 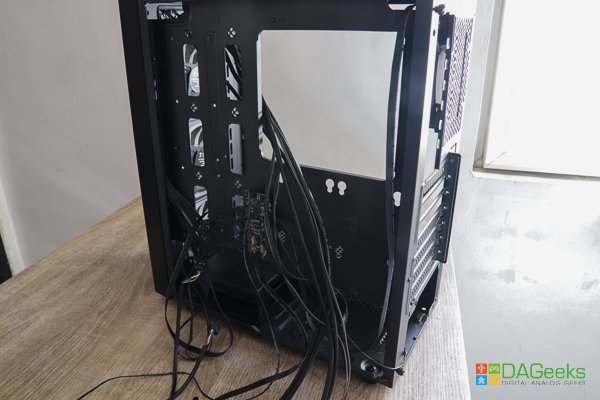 Disclaimer: I only have an mATX board available at home so your build experience may vary. I’m going to share my experience in building in this case so here’s a list of important peripherals that I used. 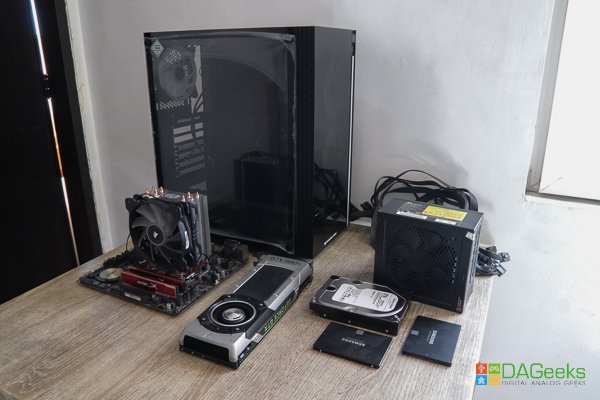 First things first, I removed the front panel and side panels so I can easily access the motherboard tray from any angle. You can see that the fans are mounted on the front panel, which is kind of weird as it prevents the system from drawing in air. Alternatively, you can mount them on the case itself for enough clearance. Not being a full-sized tower, this case only supports up to ATX-sized motherboards. And despite having 3 fans in front, you can only mount a 240mm radiator in front because of the PSU shroud. But on today’s systems, that’s more than enough cooling even for a high-end system. 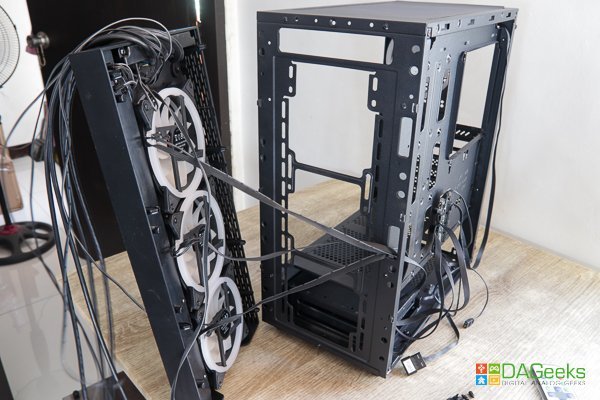 Mounting the motherboard, I immediately noticed the first mistake I did. 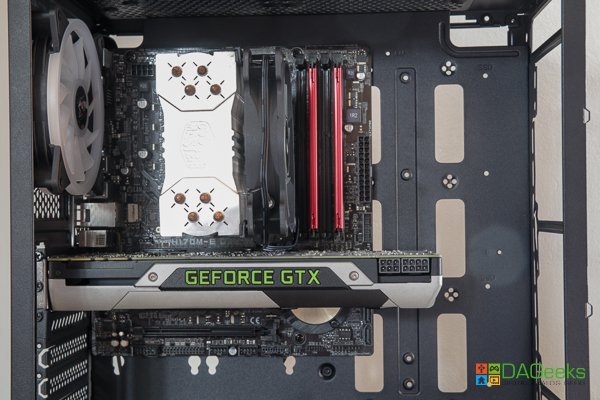 Xigmatek, Y U DO DIS? As you can observe, the slots where the main power connector should pass through is partially blocked by the motherboard. Also, this is an mATX board, so if you have a full-sized ATX board, the slots are completely blocked. But you could route it on the other slot in the far right? Those are mount points for an SSD and it’s a bit far from the slot to make for an appealing cable placement. An important thing to consider if you’re building a system and looking for a case is if the case you’re looking at fits all the components you plan to put in it. If you get a full-sized ATX motherboard, you’re going to have to use the slots on the far right, and that’s 2 less SSD mount points for you. Don’t worry there are other areas where you can place your drives. 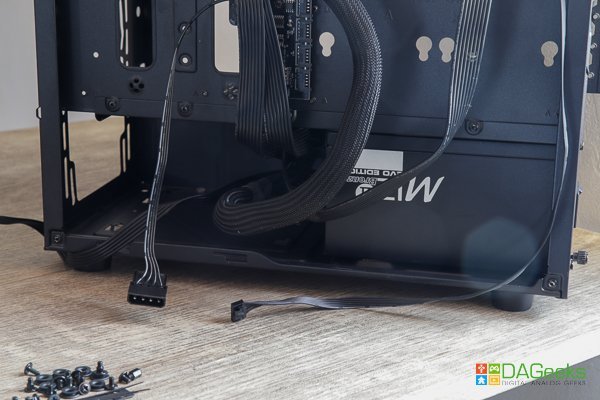 Realizing my mistake, I started to install the power supply unit so I can route all the necessary cables before adding any more components. Now my PSU is 170mm, which is the maximum this case can fit, that’s why you can see I removed the HDD caddy in front of it to be able to install it and its cables. This is a modular power supply, by the way, which means I only need to connect the cables that I need for my system to run, resulting in less clutter. 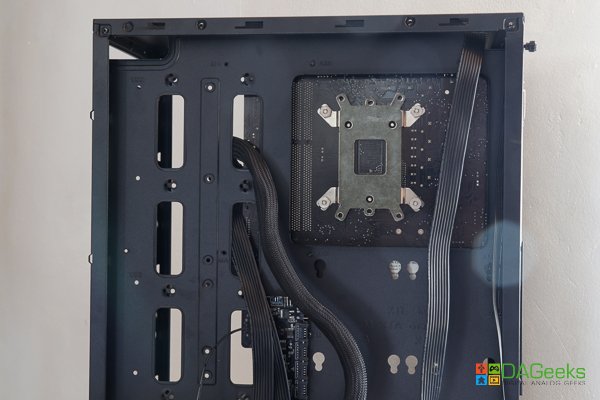 Now that’s better. That’s a tight fit, I should say. Make sure to plan your cable management before you screw down the motherboard to the motherboard plate. Below the motherboard power cable, you can see the PCI-e power cables. You can also see that I routed the CPU power cable on the top right. There’s also clips for cable ties along these routes which makes for tamer cables. For the purpose of this review, I avoided tying them down as I’ll have a hard time cutting them off after the review.

Now that’s a cleaner looking system on the front. For an ATX case, this feels very much like building inside a mATX case. There’s not much real estate space to just go ahead and put all your components in and fix stuff later. You basically need to plan your way around the case while building, which is unforgiving for first-time builders.

If you haven’t made the jump to SSDs yet and have an array of hard disk drives, this case may not be for you. The HDD caddy can only hold 2 or 3 3.5″ HDDs. 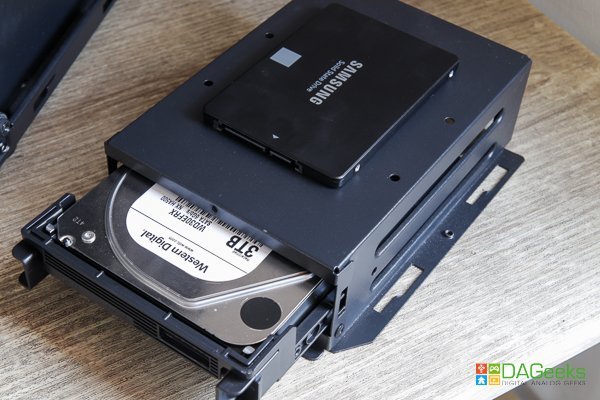 But with SSDs getting cheaper and almost nearing the prices of high-end HDDs, it’s a no brainer to get your system the SSDs it deserve. You’ll thank yourself later. You can also mount 2 SSDs behind the motherboard plate. 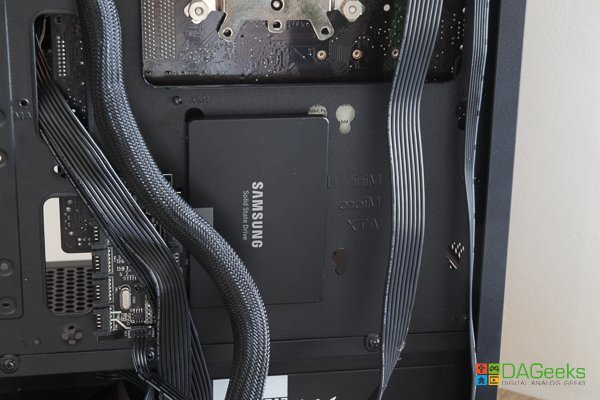 And another 2 beside the motherboard. If you feel you’re going to get short on storage space, utilize your boards M.2 slots for even faster performance. 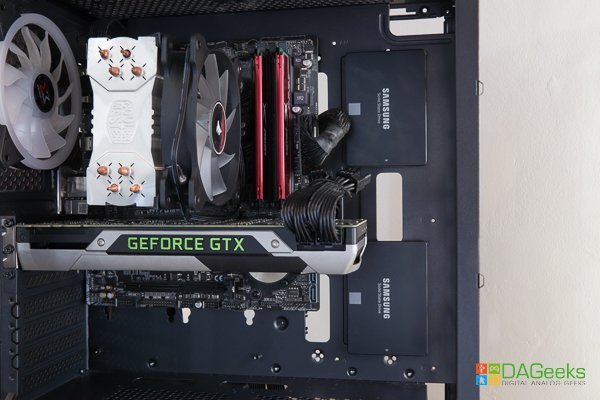 That’s pretty much about it when mounting components to the motherboard. Here’s a snapshot of what the back looks like with minimal cable management. Again, you can choose to tie down the cables for a more professional look. 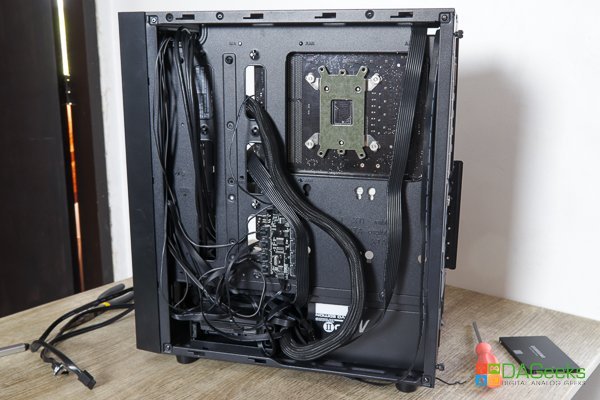 And here’s how it look like at the front. 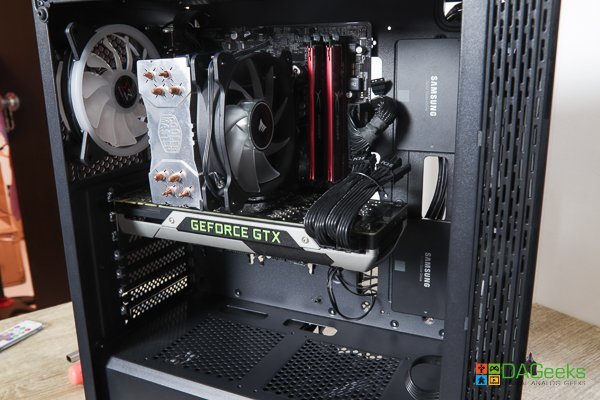 Despite having minimal cable routing, the Xigmatek Poseidon still managed to keep the front side neat and tidy. Cable management is important in a build as it does not only make your build look aesthetically pleasing, but it ensures good airflow inside your case.

And here, we have the case in its final form. 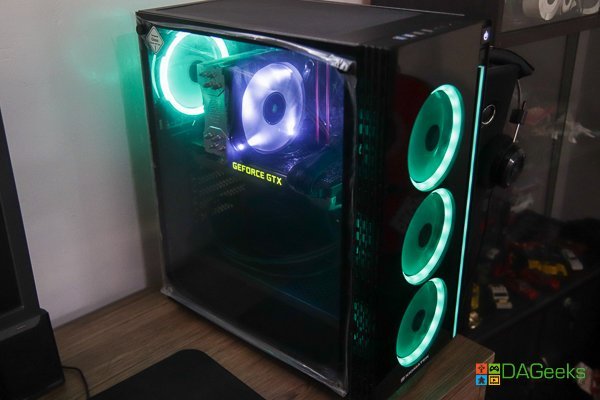 The included fans are addressable RGB and comes with a remote control to change settings, colors and behavior to suit your current mood. This particular case also has support for syncing the LEDs with the rest of your system with software from known motherboard manufacturers like ASUS, MSI, Gigabyte, Asrock, etc. 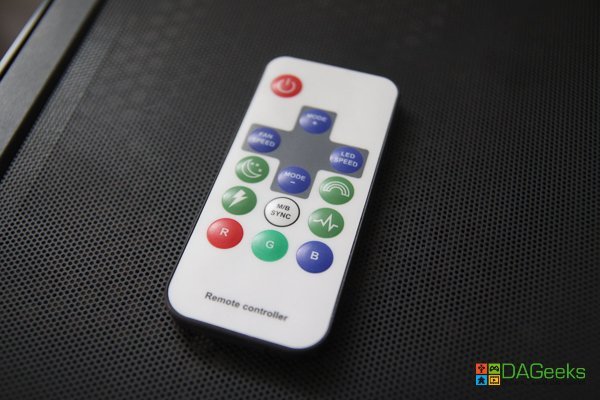 Priced at 4,850 php, the Xigmatek Poseidon is a bit ambitious in the space its targeting considering that you can get higher quality cases from top tier brands at its price point. Though it’s hard to argue that the included fans are a bargain when you consider the price, it’s not enough to justify the issues I encountered while building. Again, seasoned system builders won’t have a problem going around and planning around a case like this, but first-time builders may find themselves frustrated especially when managing their cables and planning around the build.

That said, the tempered glass design panel on the side and front panels look gorgeous when sitting at your desk, especially when all your LED fans are lit up and synced. The number of fan mounts in this case is something to consider as well as in a country like ours, optimum airflow should be your #1 consideration when choosing a PC case. If you also plan to go the water-cooling route, you can mount 2x 240mm radiator on top and at the front, while having enough space for your tubing.

Important reminder: Research beforehand your components’ clearances to ensure that your chassis will fit your hard-earned system.