What Should the H Stand For? – T.H.A.N.O.S. Theory Now That We Got Know Where The Soul Stone Is

Slight spoilers are part of this post. If you haven’t watched Avengers: Infinity War (why haven’t you?) some spoilers ahead.

Over the course of the 10 years of Marvel Studios many theories have popped up online on the internet about what would happen during the movies. The most popular one being the theory where the initials of the locations of each infinity stone spelling out Thanos‘ name. So far the list goes on like this:

With every movie the theory seems to be closer and closer to becoming truth, or a really really big coincidence.

Since the release of Infinity War, and reveal of where the Soul Stone was my friends and I here at DAGeeks have been discussing what the H could mean. There were a lot of contenders, some very plausible, and others a joke.

Before we go to the theories, I think it’s best we get a good idea on what happened before and during the time he gained the Soul stone. The scene starts of with Thanos and Gamora arriving on the planet of Vormir, where Gamora said the Soul stone lies. As they approach the base of where the altar is they meet a shadowy figure, someone who’s watched the Captain America: The first Avenger movie will recognize. He warns them about the Soul stone, and its requirement of sacrificing a loved one “a Soul for a Soul stone” as it were. Thanos sadly sacrifices Gamora by throwing her off the cliff side. The sky opens up, and after which I think he has another vision, and wakes up in a pool of water with the Soul stone in his right hand.

Now that we have that out of the way, I can now start with the different suspects for the “H” in the T.H.A.N.O.S. theory. There has been a joke going around online about it meaning Hulog, which is Filipino for fall, other jokes include Hugo Weaving, though i think all of us know already that it wasn’t really Hugo but an impersonator.

This one is pretty simple and straightforward. Thanos climbed up the hilltop before he threw Gamora off of.

After he had sacrificed Gamora, Thanos had visions after which he woke up in a different place with the stone in hand. 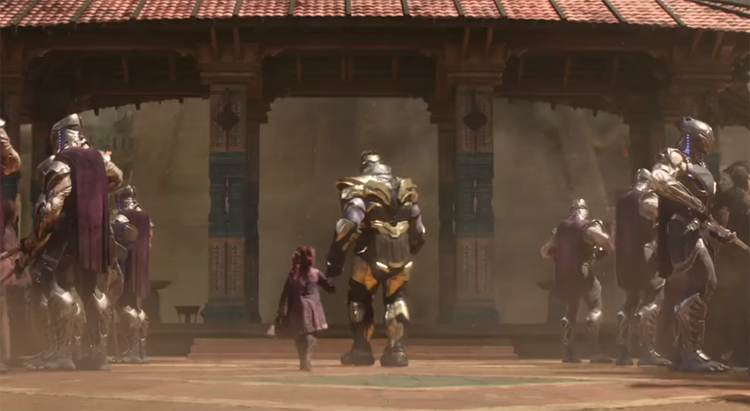 And the last of these is Heart, or loved one as others would call it. To get the Soul stone as I’ve said before, one would need to sacrifice a loved one to gain it. Thanos sacrificed Gamora, his most loved daughter. Despite what others may believe, the fact is that the Soul stone revealed itself is proof that Thanos did love Gamora, which is why I think if ever there is an official statement made by Marvel Studios that this would be the answer.

Of course these are just theories and speculations. There are many possibilities as many as the 14 million outcomes Dr. Strange had seen and we would love to hear from you in the comments section down below.

So what would fit the theory now that we know the soul stone’s out? What do you think the H should stand for?