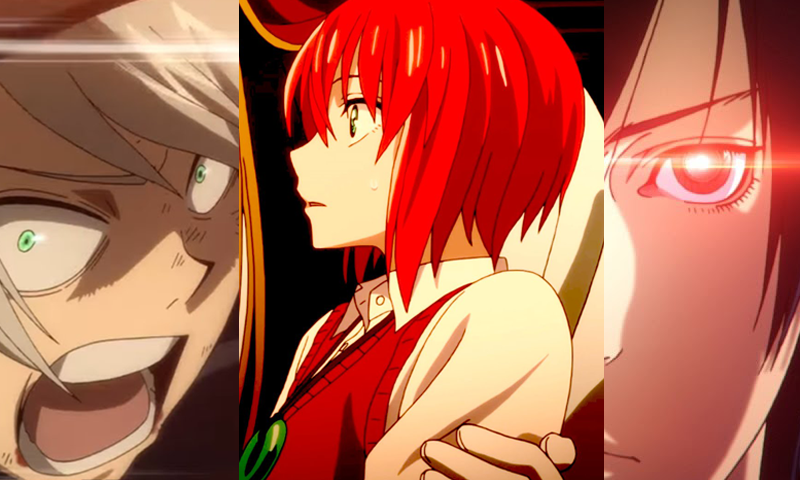 As the hot summer days finally disappear, out comes another season and with it, comes another batch of new anime for us anime-lovers to watch. Now that the new fall season anime had released some of its episodes, I gathered titles of anime that we have found quite interesting so far. I came up with a list of the Top 3 Must Watch Anime for this Fall Season, based on my very own humble opinion, of course. For this top 3, I won’t be including any sequels or any anime continuations that had already been aired throughout the past seasons up until now. (Yeahp, sorry we will not include Shokugeki no Soma, Gintama, Boruto, Himouto Umaru-chan, even UQ Holder, and other shows though we honestly say that we do enjoy watching them)

Two orphan boys, Asta and Yuno, have great hopes on joining their kingdom’s Magic Knights and eventually becoming the next Magus Emperor, the strongest Magic Knight of them all, and they had been competing against each other ever since. At the time they reached the age of fifteen when they are supposed to receive their own Grimoires, Yuno, who was born special and talented, acquired the rare four-leafed clover Grimoire, while Asta, who had no magic from the start, received nothing. An incident happened that awakened Asta’s powers which revealed a Grimoire with a symbol of a five-leafed black clover.

Let’s see, there’s the idiotic underdog hero with the unrecognized strength, the cool rival with all the good looks and awesome powers, flashy magic and fast-paced sword fights, and the ever-present power of friendship. This beautiful cliché mess known as “shounen anime” has massive fan base and is well-loved by the typical anime fan boy. Similar to its older fellow-shounen anime, like Naruto, Dragonball and One Piece, it’s safe to say that we will be seeing more if it in seasons to come. Though many viewers found the main character’s voice actor quite annoying, we think that it is quite appropriate since he is supposed to be a very annoying character and it seems like it’s doing a good job, right?

Chise Hatori is a young Japanese girl abandoned by her family for being “peculiar”. She was sold in an underground auction and the one who bought her was a very mysterious man with a strange-looking face named Elias Ainsworth, who happens to be a mage. He then told Chise that he will make her his apprentice.

A mix of fantasy and mystery with a dash of western culture, Mahoutsukai no Yome is an anime that anime fans and casual anime watchers will definitely enjoy. We can say that this show can be used to introduce anime to people who don’t watch anime. It is quite similar with CLAMP’s xxxHolic, complete with its mystery theme and it deals mostly with the supernatural.

Ichiro Inuyashiki is a 58-year old man who lives a boring life and unappreciated by his own family, as he is most of the time ignored by his children. He also discovered that he has cancer and has 3 months to live. One night, while he was out alone in a local park, he noticed a young man standing right next to him and suddenly an explosion occurred. After being unconscious, Ichiro woke up alone in the middle of the park early in the morning and felt that there’s something different about him and it has something to do with what happened the night before which then changed his miserable life once and for all.

The intriguing theme of science fiction combined with the gritty atmosphere of most anime that are under the category of Seinen, Inuyashiki explores the darker side of anime that delves into the human psyche and beyond, which most Seinen fans enjoy. To top it off, its animation has this distinct classic feeling into it which you can find in anime like Ghost in the Shell: SAC 2nd GIG. Even its opening feels amazing, which felt like Ghost in the Shell and Death Note combined together and smashed with a MAN WITH A MISSION song. You know what they say, with great anime comes great opening theme song.

Do you agree with the list? We’d love to hear your thoughts on the comments!