The Netflix Experience – This APCC 2018

Here at AsiaPOP Comicon Manila 2018, Netflix is one of the major sponsors. With that they have provided for us, and many other people here the APCC an experience to remember, at least until they top it next year.

I’ll start it off with their exhibit, which is one of the more, if not the most popular exhibit here. It’s hard to miss the the Netflix area as they have a giant chinese arch way with their logo on it. As you walk in you’ll immediately see, what looks to be the scene of where Iron Fist‘s most recent scuffle with the Hatchet gang. There are interactive pieces like the wall and broken car, where if you “punch” it they will trigger, either a lights on the cracks, or the car alarms. In the Chinatown district you’ll also find a tattoo parlor where fans can get 1 of 4 tattoos of which I got the hatchet gang tattoo, because why not? There is also a give away booth where you can get your own Sabrina the teenage witch paper bag with a Luke Cage poster and Netflix baller band. There is also a 180 degree photo room, where fans can also pretend to have the iron fist as they punch the ground. 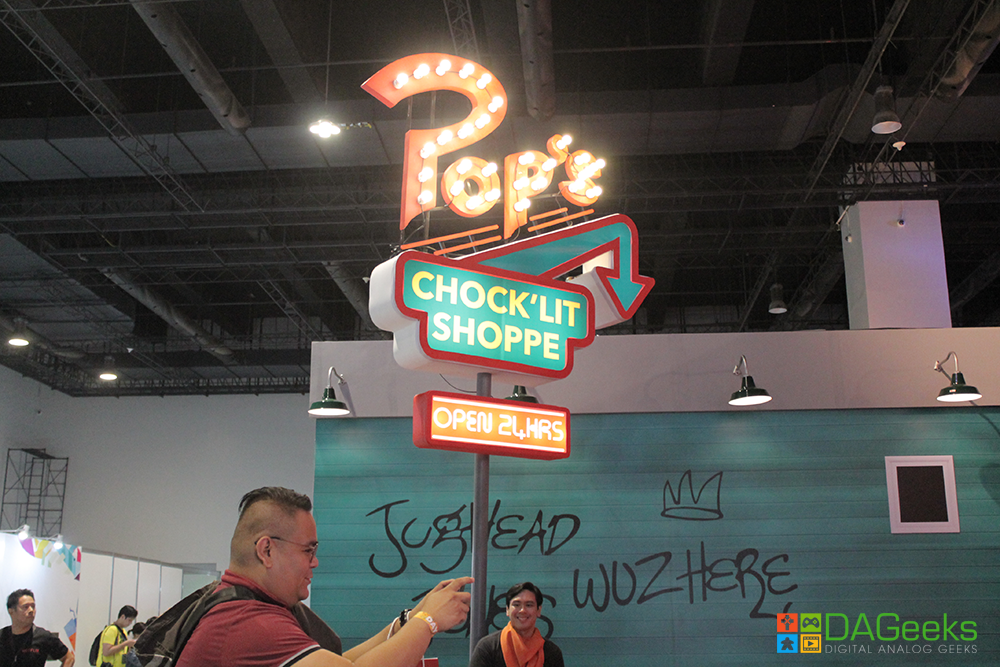 Of course these aren’t the only areas to be seen, there is Pop’s Diner where fans can enjoy a performance by Josie and the Pussycats, as well as support Riverdale high as you take a picture in the varsity jackets. Right across from Pop’s diner is the Palace Arcade where fans of Stranger Things can submit their crayon drawings to be posted on the wall for everyone to see, or just play some old school arcade games like Ms. Pacman, or Galaga, which I failed at miserably. 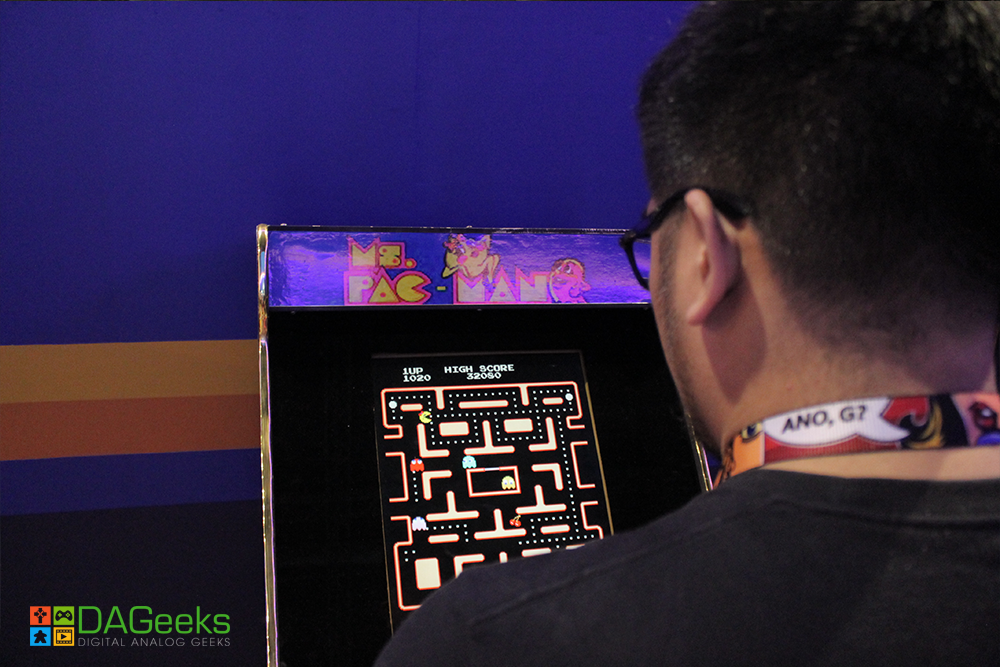 If these Live TV shows aren’t your thing, Netflix has you covered with a face painting booth for Aggretsuko where you can have your face painted to look like your favorite red panda. There is also the Poison shop promoting Matt Groening‘s latest fantasy show, Disenchantment.

The biggest surprise that Netflix had in store though was waiting for us in the Hall N. The line went up to about 1000 fans also excited to see what Netflix wanted to show to us. 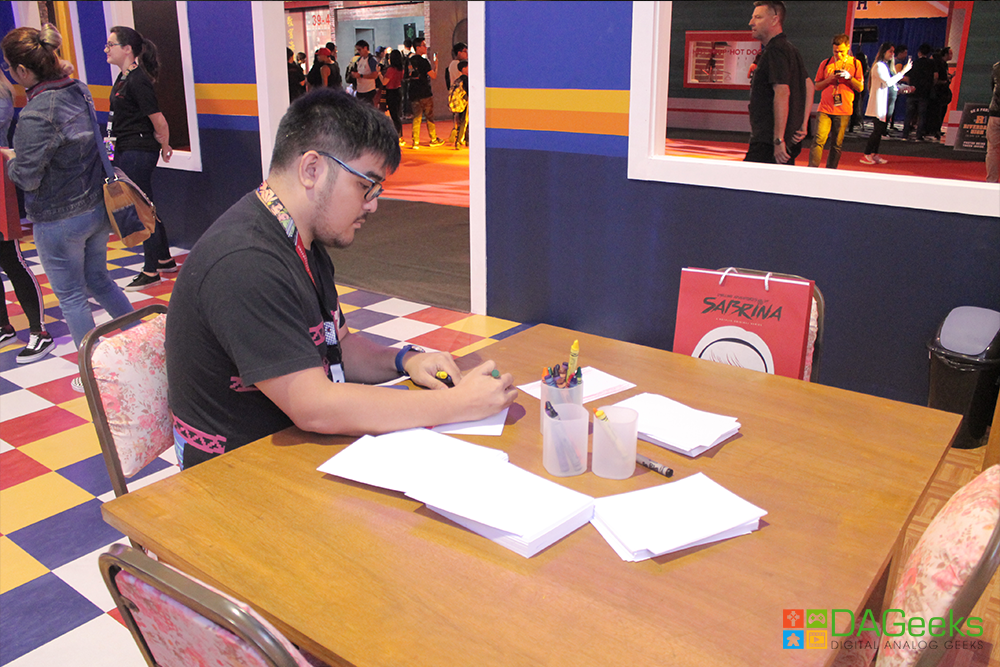 The first of the panels was the Netflix Anime panel with Adi Shankar and Takashi Yoshizawa, interviewed about their experiences making the Godzilla: Planet of the monsters, and the 2nd season of Castlevania. Adi was a delight to watch, as he interacted with the crowd a lot, hyping us up, and even showing off his Nintendo Power Glove. Takashi on the other hand was more professional, sharing his story of his first Godzilla movie which was 30 years ago when he was 8 years old, and how he wanted to bring that experience to the life in an anime. Once their Interview was over we were treated to a trailer, not just any trailer, but the world premier trailer release for the Castlevania season 2, exciting everyone even more than they were before.

Next to come up is the team of Luke Cage, with Michael Colter, Mustafa Shakir, and Cheo Hodari Coker. Just like the previous interview they talked about how they made the 2nd season, stuff like how they prepped. It was also fun watching them as they answered the questions, especially what this meant for Luke since he was up against someone who was basically just like him. There were a few comparisons with how they wanted Luke to embody a never give up attitude kinda like Muhammad Ali, and Manny Pacquiao. Near the end of the interview Finn Jones joins them on stage, reuniting the Heroes for hire, which honestly got me all giddy as I sat in my chair. They talked about the crossover episode, and how it was basically Finn inspired them to make that crossover episode.

The Iron Fist panel though was the frosting on the cake. Finn Jones walks on stage with showrunner Raven Metzner. Even sharing their story how Metzner‘s son beat the Iron Fist in Mortal Kombat. Just like the Castlevania season 2 trailer. Sacha Dhawan also makes an appearance in the form of a video from London, expressing his gratitude to the fans for supporting the show. They shared with us the world premier trailer for Iron Fist 2, showing off what the Yellow Bandana mask would look like, as well as a sneak peek at what Kun Lun would look like. Jessica Henwick also makes an appearance via video, but seemingly lets something slip out that the Iron Fist team has a surprise for the fans in Hall N that day. Not only were the fans the first to see the season 2 trailer, they were able to see the first episode of season 2.