I’m only dangerous to the enemies of the Empire.

On this issue we get to explore more of Vader and Thanoth’s relationship. Vader baits a group of Rebel troopers to Anthan 13 and kills them to be used as an excuse for his time on Anthan 13. Thanoth informs Vader that he suspects that the contraband was stolen since an accident was made to happen in here. Vader then tells Thanoth that he could be mistaken, but affirms Thanoth’s thoughts as to not have Thanoth doubt Vader. This becomes of an example of a back-and-forth conversation between the two for this issue and the following issues, as both try to outsmart yet cooperate with one another.

Later on, Darth Vader & Thanoth meet up far beneath Anthan Prime to look for a man named ‘The Dragon’, who’s known for arms dealing. One of his dealers, Doowan, was to appear in a droid fighting den, and they would meet Doowan to ‘persuade’ him to give more info on The Dragon. They expect to come in quietly only to find an army of Stormtroopers sealing a perimeter, finding the twins fight along with some troopers against some rogues. The Stormtroopers are drawn quite thin in this issue, and their helmets appear too large for their bodies. This is not 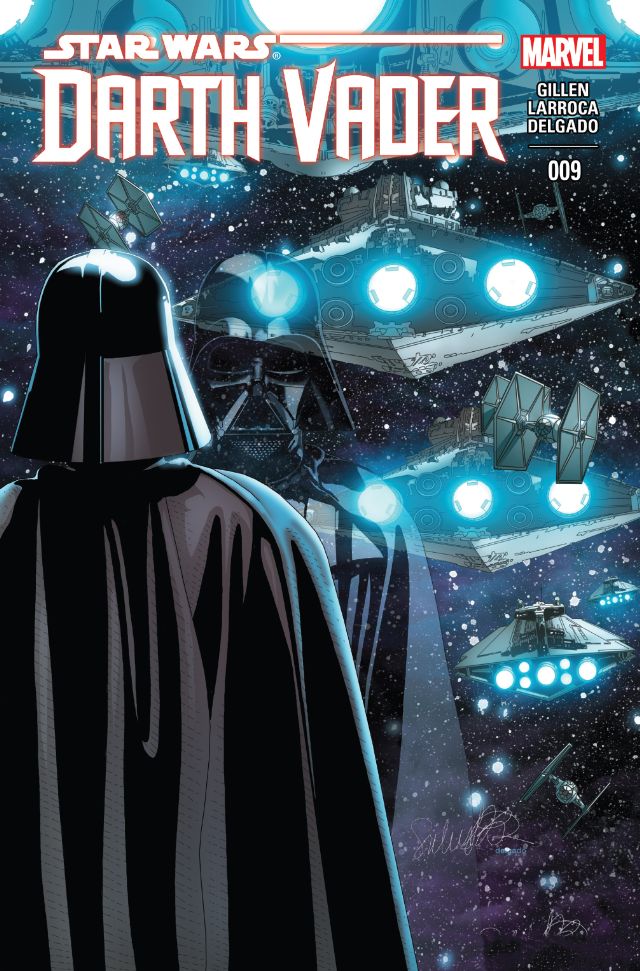 much of a problem, but it does quite concern me. Anyway, they soon find Doowan in the fight and begin to pull him away from the fray to interrogate him about The Dragon. Vader threatens him enough to make him share a bit of information. He lies at first, but Vader detects this and so Doowan tells the truth of the Dragon’s location. Thanoth then hands Doowan to the twins, since he may be of help to their Plasma Devil investigation, only for Morit to behead Doowan as a ‘show of force’. This frustrates Thanoth, making him comment that children should never do an adults’ job. Thanoth however notices that Vader has been too silent and passive through the mission, leading him to doubt the Sith lord. “You’re a man who has bestrode the galactic stage…yet I am taking lead,” says Thanoth, who now begins to wonder about Vader’s motivation. Vader tries to excuse this by saying that his last adjutant was a traitor, and he was merely assessing if Thanoth is dangerous. Thanoth confirms that he is dangerous, but only to the enemies of the empire.

Meanwhile we see Aphra also go to Anthan Prime while her droids go play holochess. Aphra’s motives are revealed as she sees a man named the Ante (whose design is somewhat terrifying yet funny to look at) who helps her find a man named ‘Commodex Tahn’. The Ante gives her the location, and Aphra pays him with the contraband money. Triple-zero then tells Aphra that this ‘Commodex Tahn’ doesn’t sound interesting to Vader, to which she agrees, even saying that Tahn is a mortician like his family…on Naboo. The group prepares to leave Anthan Prime, and the comic ends.

Darth Vader and Thanoth’s relationship feels like a buddy-cop relationship, except they’re totally not buddies. It’s interesting to see Vader partner with another person who is as cunning and smart as he is—and maybe even more so. As for Aphra’s sidequest, I have a feeling she may be getting closer to a truth we already know, but as for the characters in the story, still don’t. Larroca nails the Ante’s design and purpose, as he’s a character whose race has never been revealed before and just shows how diverse the Star Wars universe is. I also like the idea that they made him like a living Google, who seems to know everyone’s background & location.