Aphra and the bounty hunters pull a complicated heist as they attack the Imperial carrier of the contraband. First they blow up a remotely-controlled rock, creating an asteroid belt which would hit the Imperial ship. The Imperials would then think their systems being down is a side effect of the collision. They get in the ship, seal the crew’s quarters’ door, destroy vault security, and have Krrsantan pilot their ship and maneuver a rock tied to it and crash it against the Imperial ship. This then ripped the Imperial ship apart, which allowed the contraband ingots to get away in space. BT-1 is to generate a field to scoop up the loot, or part of it at least. All this is done while making it appear like an accident. The group is successful and get their share of the contraband. However, Aphra & Krrsantan were able to hide most of the contraband lost from Imperial cargo on Anthan 13, a moon of Anthan Prime, and so get a 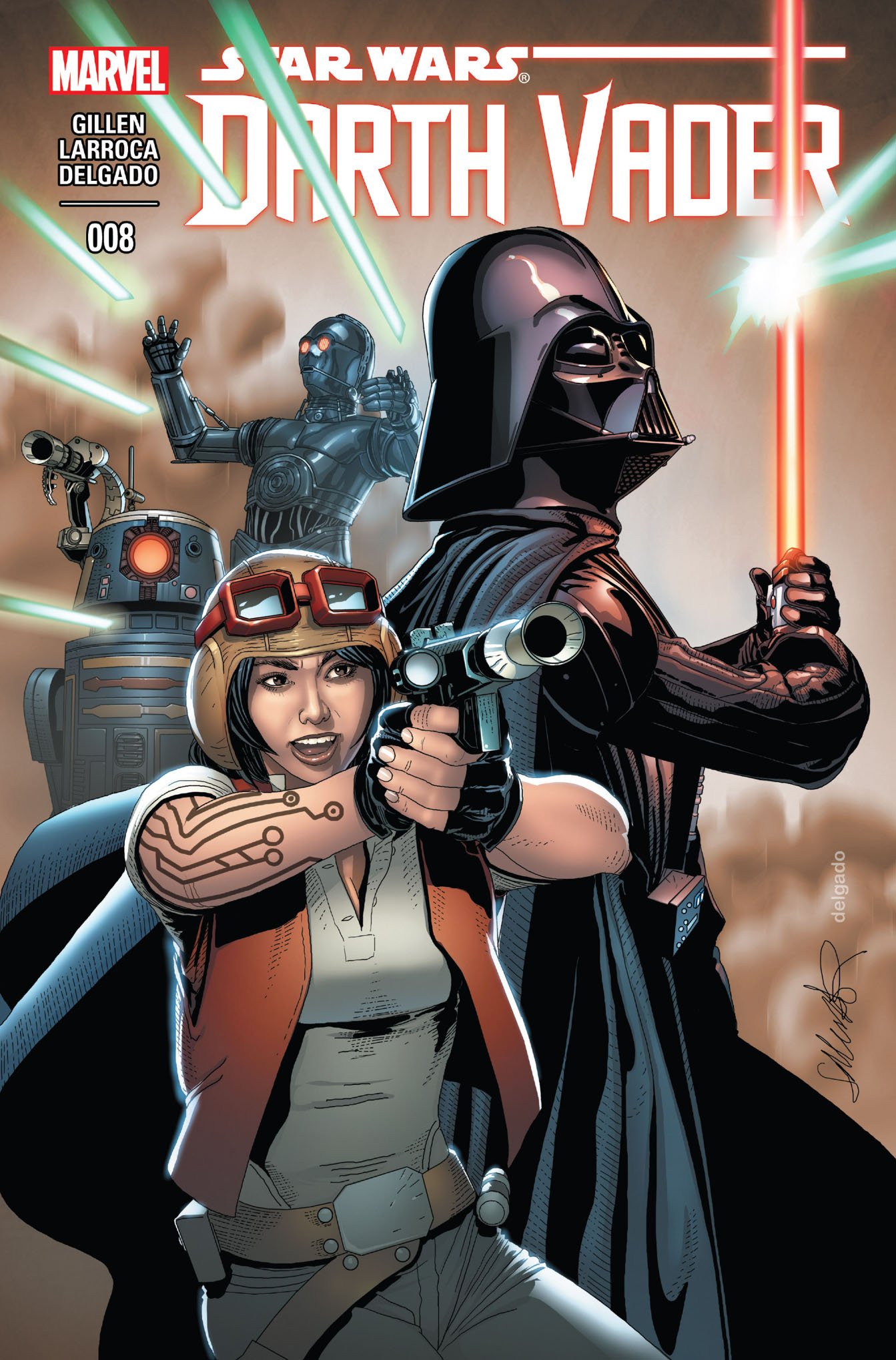 Vader, later on, appears on the moon with them to receive Aphra’s reports. Aphra then asks Vader, “…We have a droid factory. We have the bounty hunters. We have the money to pay the bounty hunters. What’s next?” to which Vader replies that he still needs certain information confirmed from ‘one who is proving elusive.’ When Aphra asks if this is about the X-wing pilot, Vader tells her that she must deal with the stolen contraband they just stole from the same people they work for. Triple Zero then commented on the fact that IG-90, a droid bounty hunter who joined the earlier heist, earned money while he, a fellow droid, does not.

Back to the Imperial base. Vader, Tagge and Cylo-V’s creations gather to discuss their next misions. Tagge assigns the twins to deal with the Plasma Devils, a Rebel force, while Commander Karbin was to deal with the X-wing pilot who blew up the Death Star, even if the pilot was to be killed. Vader immediately wanted to take this assignment from Karbin, but so did Tulon. However, Tagge insisted with what he wanted since Vader and Tulon had a personal problem with the pilot—Darth Vader’s failure and Tulon’s revenge for having her colleagues killed in the Death Star. Instead, Vader is assigned to the stolen contraband from the Empire and Tulon with research. Tagge dismisses the meeting, but calls Darth Vader for his new adjutant—Inspector Thanoth. This new adjutant proves to be more than meets the eye as he quickly notices that the cuplrits must have used the moons to hide the remaining contraband, and that Vader’s knowledge of the moons would prove to be useful. Vader asks Thanoth of this ‘knowledge’ of the moons, only for Thanoth to tell him he knew of his trip to Anthan 13 the day before. He knew this due to the slight ionization of surface dust on Vader’s armor, which was characteristic of that particular moon. Vader notes how perceptive he is, and Thanoth tells him that he is a professional investigator—so he really must know these things. Thanoth even goes to tell him that this contraband case would be a simple case, and that it will be tidied away within days. “We shall see, Thanoth. We shall see.” Says Vader as Thanoth leaves the room, and leaves Vader quite interested. 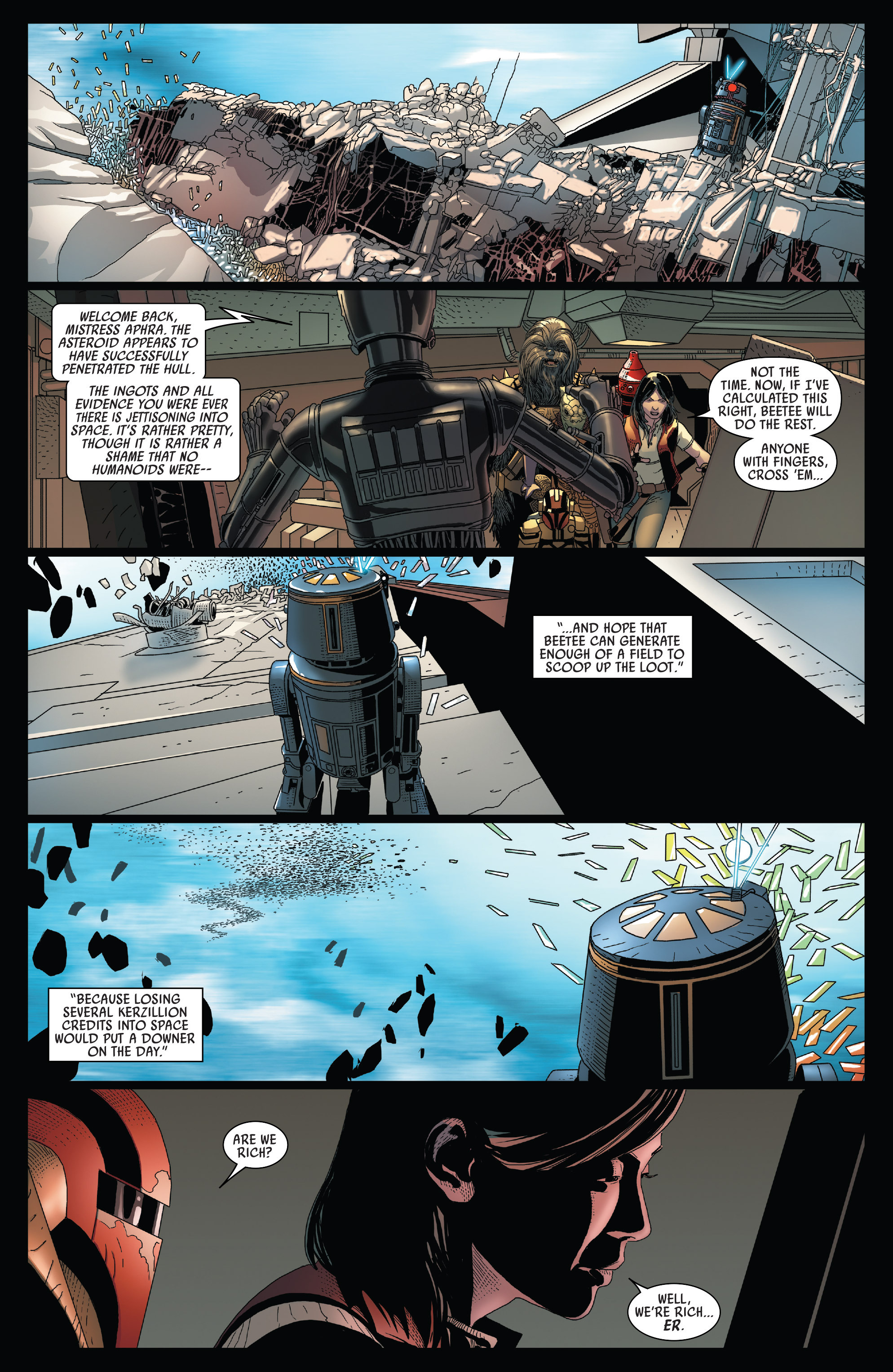 For some reason, I felt no interest in this issue other than for Thanoth. I’m still somewhat let down that I have to wait another month for the next comic, since each issue seems somewhat too short. Though Vader, I believe, is being suspected of being involved in the contraband case by the new adjutant Thanoth, a monocole-wearing homage to Sherlock Holmes. Thanoth may prove to be difficult to deal with, especially with the fact that he is a professional investigator. Thanoth also looks way too similar to Morgan Freeman. Everytime I read his lines I just imagined Morgan Freeman talk to Darth Vader, which needless to say, makes their conversations much more awesome. This story provides an interesting supporting character, which leaves me wondering as how he is to complicate things for Vader.