Darth Vader and Thanoth finally find the Dragon in his mansion, who doesn’t appear to be an intimidating character at all. The Dragon surrenders, saying he would tell Vader everything. When Vader asks the Dragon if he was willing 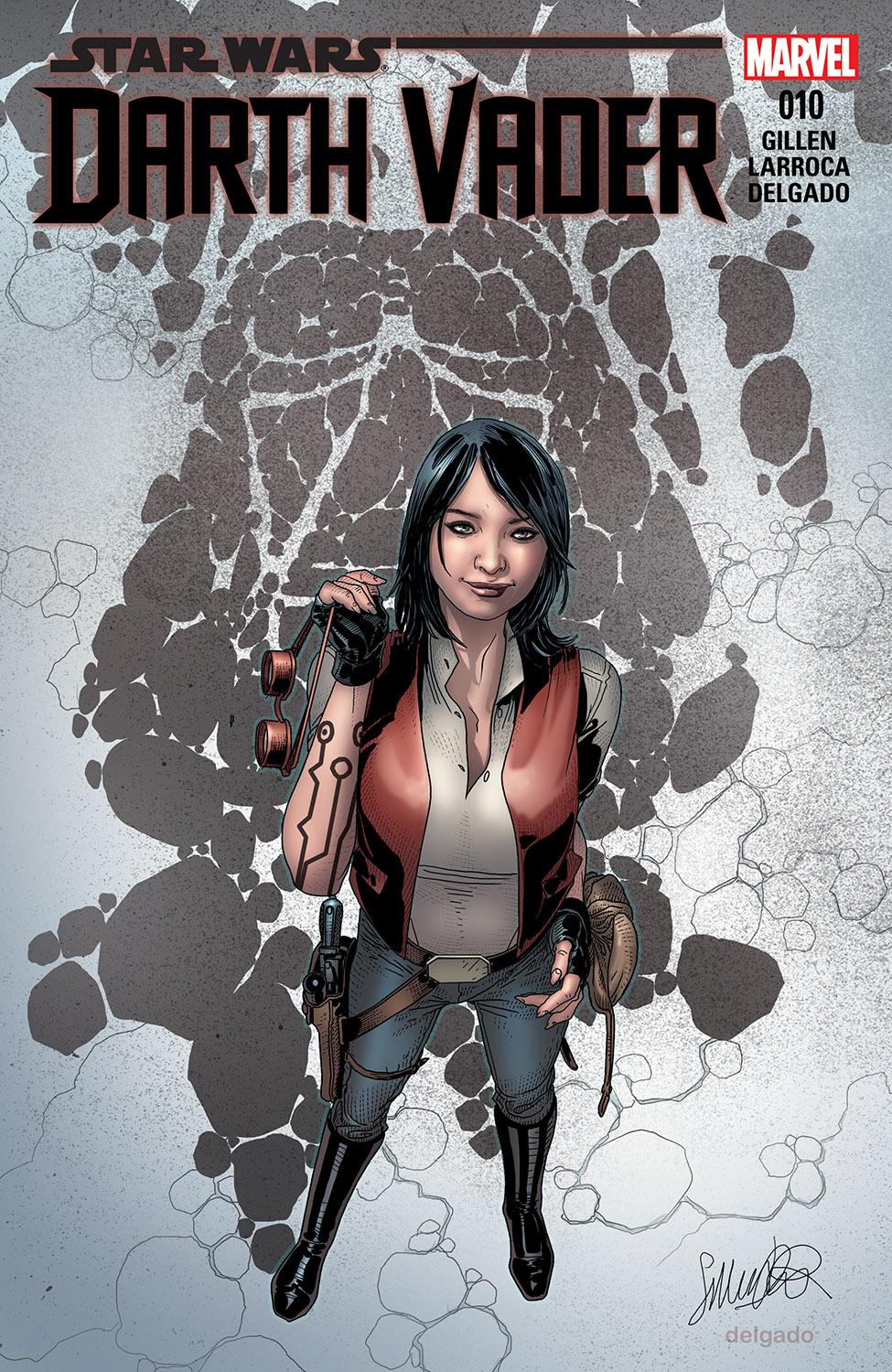 to reveal to whom the Dragon sold the explosives to, the Dragon quickly replies yes in fear for his life, only for Vader to say, “A shame,” proceeding to kill the Dragon. Thanoth, who just arrived at the scene, asks Vader what happened, only for Vader to tell him that the Dragon said he would detonate the building. Thanoth dismisses this by saying there was no sign of any trigger, but Vader uses the Force as an excuse that he knew the Dragon was lying. Thanoth then finds the Dragon’s safe and so asks Vader for his permission to try opening it. Vader tells him to ‘be sure not to fail’ when he truly hoped for Thanoth to fail. Sadly, he succeeds, and is able to grab the Dragon’s records. Vader is once again surprised by Thanoth’s talent and persistence, to which Thanoth receives this as a compliment. However, Thanoth tells Vader he would have to investigate the records alone since Vader is a noticeable figure in their quiet investigation.

Meanwhile, in Naboo, a man’s home is invaded by Aphra and her group of droids. The man opens a secret cabinet to find a gun to defend himself, however the fight is brief since the droids easily overcome him. Aphra then commands the rest of her droids to find whatever safe the man has and clean them out: they were to make it look like a robbery. The man then tells Aphra, “So you’re going to kill me no matter what I do. You’re not giving me much motivation to help, miss.” Aphra then tells the man, “That’s not going to be something you have any say in, Commodex Tahn.” The man then denies he is Commodex Tahn, however Aphra doesn’t believe him as the gun the man had used had a plate rewarding it to Commodex Tahn. He then says that he was part of the preparation of Queen Amidala’s body for burial, and that she needs to know his nostalgic memories of that time. Commodex Tahn denies to tell her anything, only saying that she was a great queen. A good queen. However, Aphra doesn’t quite agree with this as she’d prefer a strong queen over good any day.

This then creates a discussion for the two which opens up Aphra’s backstory. Commodex Than regrets to hear that, but she says that everyone has a sob story during war. Her point was that good queens don’t mean anything. She then gets Triple-Zero to start interrogation, who again happily complies. It would later be revealed by Commodex Tahn that Queen Amidala was pregnant before she died, but was able to give birth to a son who was taken away. Knowing nothting else, Triple-Zero finishes the interrogation and electrocutes the Commodex. This whole sequence is dramatized through Larroca’s drawn facial expressions and the layout of this part helps in showing a haunting & revealing moment for Aphra and the Commodex.

The group burns the house and prepares to leave the planet, playing on the burning home as the background to their silhouettes. Aphra then meets up with Vader to tell him all this, only for Vader to reply with absolute silence. Aphra then asks if there was anything else to do, to which Vader tells her to find Commander Karbin through the Ante, who was currently in the pursuit of Skywalker. When Aphra asks if Thanoth was anything to worry about, Vader tells her that he has no fears and that Thanoth suspects nothing. Meanwhile, a droid watches the two talk in the background, revealing that someone has been watching them all that time. 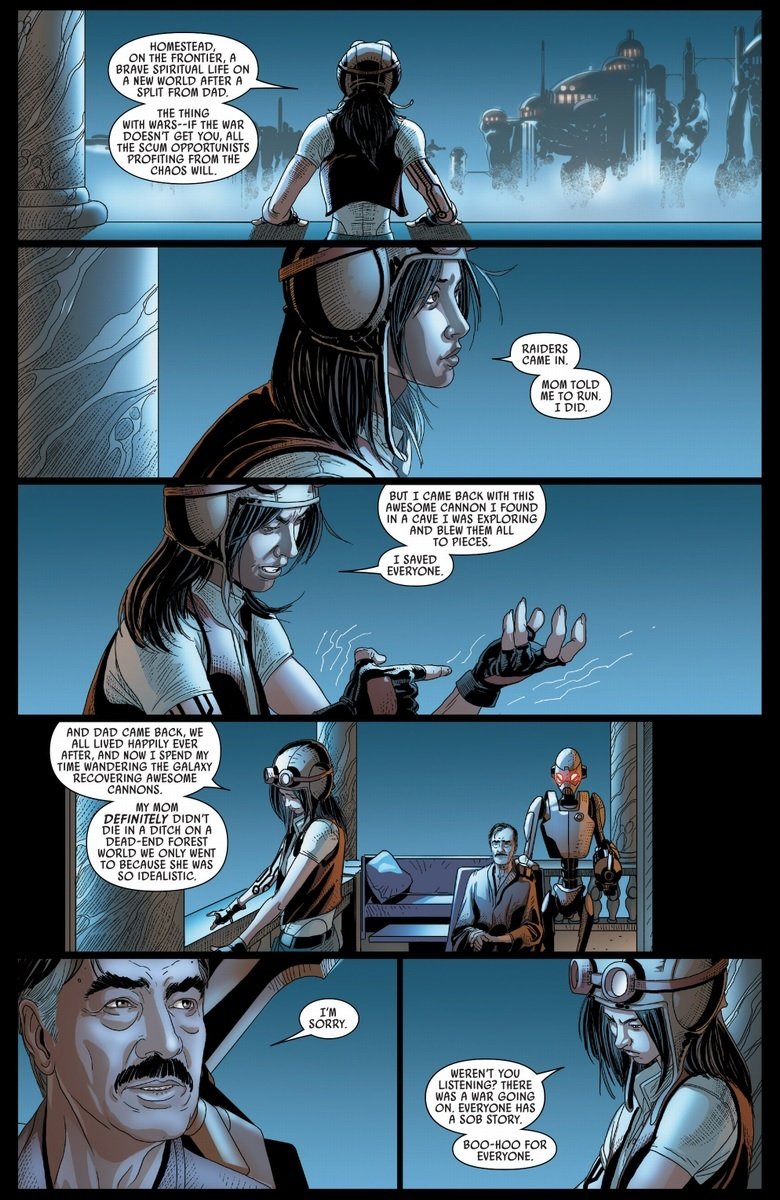 The surprises of this issue aren’t surprises to the readers. They only apply to the characters of the story, especially Darth Vader. It was nice to give a nod to the prequels for even a small bit. Things will seem to continue to prove diifcult for Vader to prove his innocence to Thanoth, but we’ll see how he deals with it. Whenever revelations in this series are given, Gillen and the team make sure that these truths are revealed at the right pacing, at the right time to impact both characters and readers.