There is no escape

All loose ends are tied down in the last chapter of Shadows & Secrets. Just when the Empire seem to have Aphra surrounded, she gets saved by the bell when Vader slyly comments that this mission is a waste. They already have the Plasma Devils’ location, and yet they continue to chase a thief. “Oh, curse me for a fool.” Says Thanoth, who then suggests to Vader that to choose between the Plasma Devils & a simple thief is no choice at all! The two decide to risk disappointing Tagge by pursuing a mission that is not theirs. They leave Aphra to strategize
on attacking the Plasma Devils. 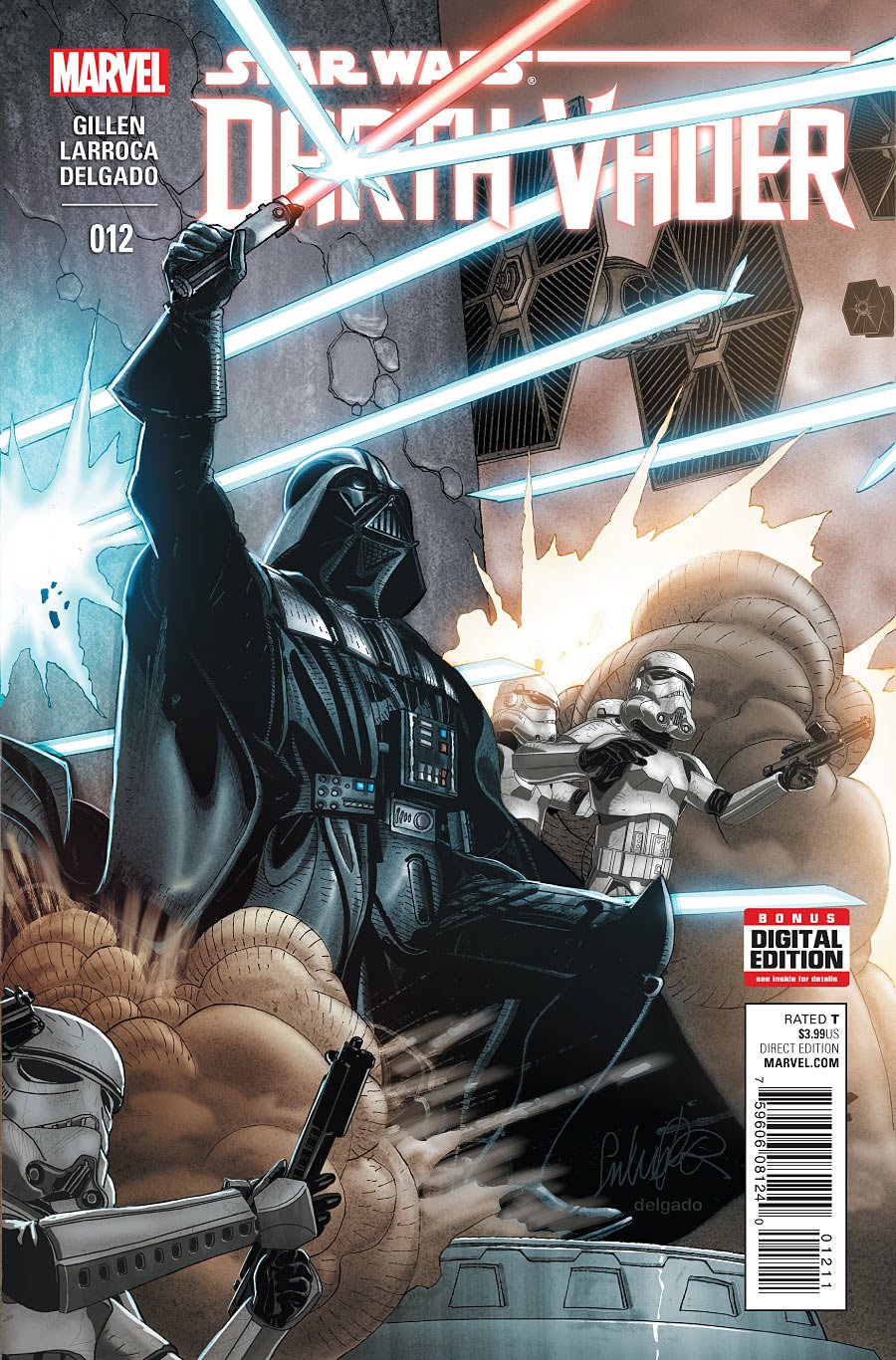 The plan against the Plasma Devils is settled. Shortly after, the Plasma Devils begin preparation for defense against Vader & the Empire. This follows my favorite moment in the comic: As one of their ships leave, Vader is found to be on the ground and throws his lightsaber like a javelin through the ship, blowing it up in the process. Vader uses the Force to take his saber once again, saying, “There is no escape.”

Destruction of the Plasma Devils is left untold, but understood that the destruction did happen as Vader, Thanoth, and Cylo’s warriors gather around Tagge to hear of Vader’s success. I was somewhat disappointed that I didn’t get to see more of Vader taking down the Plasma Devils, but it must’ve been removed since it won’t really add to the story. Gillen, throughout this series, only writes about the things that adds to the story, and destruction of the Plasma Devils doesn’t need to be shown. Angry and dissatisfied, Morit tells Vader it was not his mission. Tagge credits Vader & Thanoth success, however he tells them that it would be rather unlikely for them to find the thief again. Thanoth, again defending Vader, tries to take the blame, but Vader tells Tagge that it was his decision to crush the rebels and not chase after a few coins. 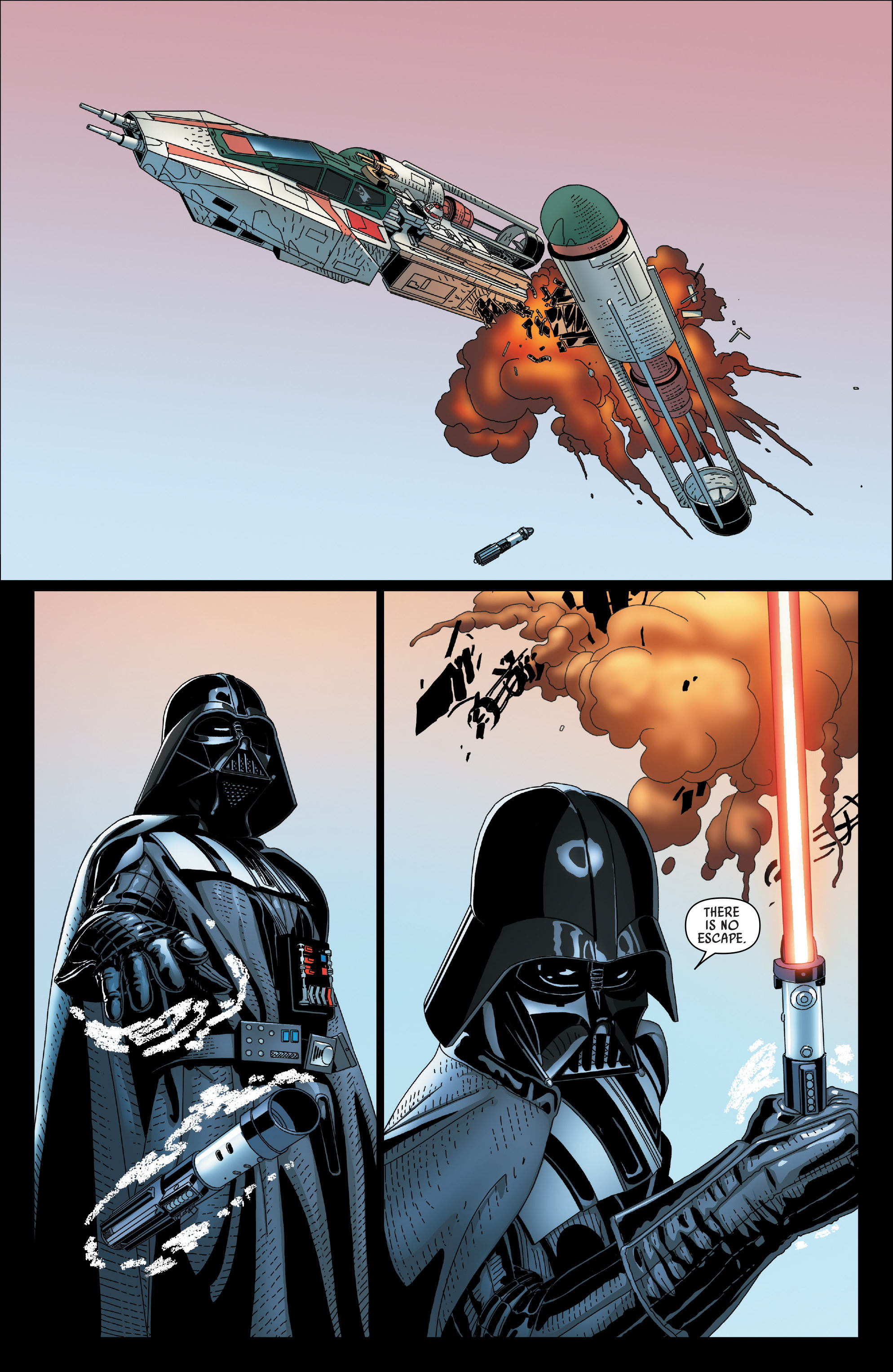 The meeting is dismissed, and Thanoth thanks Vader for taking the blame. Vader then reassures Thanoth that the thief will not escape justice. The scene changes to some desolate rock as Aphra hides, waiting for Vader. Suddenly, out of nowhere, Vader appears behind Aphra, asking for the boy’s location, to which Aphra answers that he’s in Vrogas Vas. Vader appears to Aphra as a looming figure over her, showing that she has no power over her situation & that she’s now under control of Vader. Aphra then continues to tell Vader that she wants to work for him, and that she can show him that she’s worth keeping alive. Vader complies, telling her that her success the past few days have made him appreciate her talents. Aphra tells him that there’s been apparently some old Jedi temple there. Vader denies this, and warns her that he would find the one responsible for this sort of trick if it wasn’t real. Vader leaves, alone, for Vrogas Vas, or at least he thinks so, as Commander Karbin had been watching him all along.

This issue was especially important as it settles a lot of Vader’s issues with Tagge and Thanoth. I look forward to more buddy-cop adventures of Vader and Thanoth soon. It’s been a jampacked issue, and I believe there’s more to come of this. The next part of the Saga is to be a crossover named Vader Down, which would be a crossover between the Star Wars comics & Darth Vader.