You will never believe your luck.

Things get much more interesting as Aphra meets the Ante once more to find the location of Luke Skywalker, while her two droids play Holochess. The Ante tells Aphra that the visually delightful, cloud of storms around Anthan Prime are what brings the tourists in and covers his business when she comments on the fierce storms. Meanwhile, Thanoth tells Vader to summon the Strike-Force as he found the lead through the Dragon’s data and so posed as an interested party. They are to have a private meeting with the Ante, who seems to be the sector’s prime info broker. The Ante could lead them straight to the thieves, and maybe even more. Back to Aphra and the Ante, the two discuss prices for the boy’s location, for many have been looking for him. Aphra gives the amount asked for, and the Ante 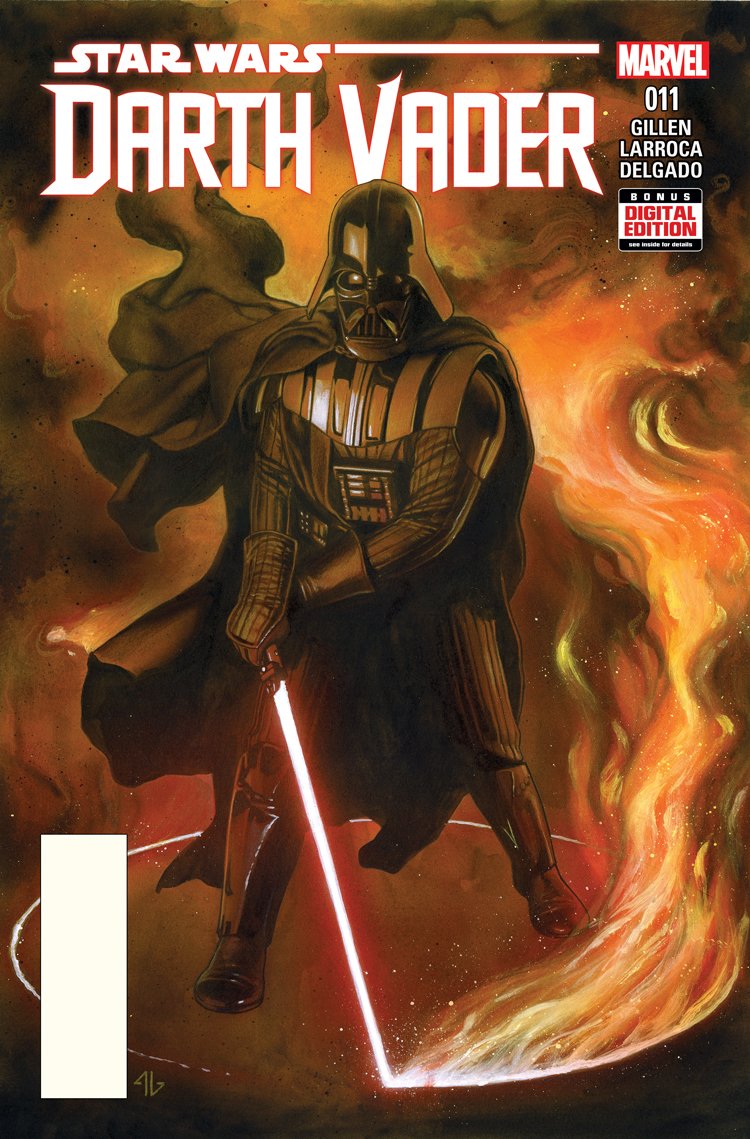 tells her that Luke Skywalker is currently in a planet called Vrogas Vas. However, their meeting is cut short by the arrival of the Empire. A fight breaks out between the Empire and the locals when BT-1 shoots Triple-Zero’s opponent in Holochess, who apparently cheated. The Ante is quickly discovered, and doesn’t hesitate in quickly giving the base of the Plasma Devils. He offers to give more details if they come to an understanding. Thanoth, however, is much more interested in the responsible parties of the Son-Tuul Pride’s treasures, to which the Ante points them to Aphra.

In fear of the Ante giving more information on the thieves, Vader uses the Force to make one of the locals shoot Ante. The few last moments are drawn and laid out in a thrilling cat-and-mouse sequence as Vader is forced to play enemy against Aphra. Aphra survives, and tells Vader that she has vital information for him. However the revelation must come later, as he must guarantee her survival. Vader then forces the ceiling to collapse on them to appear as a trap, while Aphra escapes to her ship and has gone into the storms. Nonetheless Thanoth tells Vader that she will not escape, for a blockade has been prepared to find Aphra. The issue ends with Thanoth telling Vader about how he wonders how this will end.

I feel like we’re finally gonna get to see Darth Vader encounter Luke another time, which should be exciting. As for Aphra, I have uncertainties on whether or not she will survive, since she just blackmailed Vader. Gillen continues to build up suspense through each & every issue, as Vader solves old problems only to be faced with new ones. The cat-and-mouse situation was the highlight of this issue, I believe, as the illustration uses a perspective like that of 2D runner games. There has been a lot of build-up through the Shadows & Secrets arc, and seeing that the last part is in the next issue, I wonder how this all ends. This whole arc has, of course, been about the things that which we hide in the dark, and how long they stay there until discovered. Gillen & Larroca has done a terrific job in this arc, even if some moments are quite boring, nonetheless it still gives for quite an entertaining read.