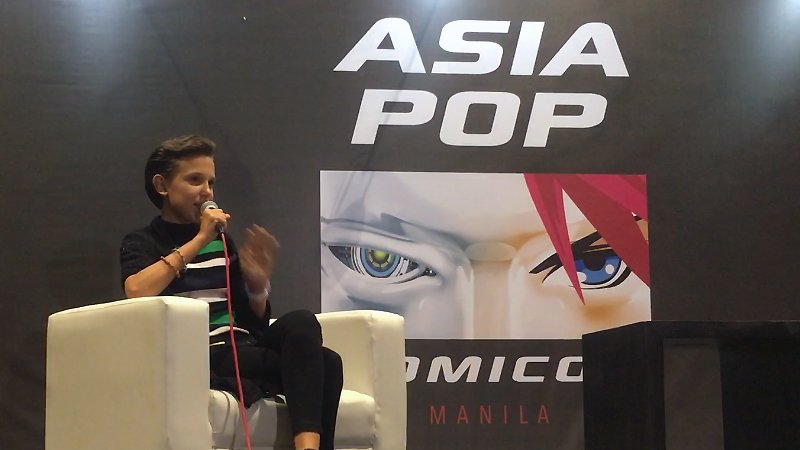 Stranger Things is not just a walk down the memory lane for most of us ’80s kids, it has also knocked into our cult obsession of everything we’ve grown to love about the decade. Created by the Duffer Brothers, it injects all ’80s references from Dungeon and Dragons and Star Wars, much to any geek’s delight.

I can talk for hours about all the references in the series, but one thing that definitely stood out in the series was the character played by Millie Bobby Brown. She plays Eleven, or El for short, a girl with telekinetic powers who helps a group of kids find their friend, while trying to escape an evil government organization from exploiting her super powers.

We were able to catch her during the Asian Pop Comic Con media conference and got to ask her some questions!

Q: If you could choose what you would do next, what’s a role you would like to do?

Millie Bobby Brown: I am very open minded, I’ve been reading a lot of scripts. I go up for comedies, everything, I just always seem to bump into sci-fi thrillers. I don’t really have a dream role, it’s whatever I read and I feel related to and Stranger Things has been something like that.

Q: You’re starring with Winona Ryder, who has also started out very young in the industry. Has she given you any acting advise?

Millie Bobby Brown: Winona was a very good friend of mine, so I go to her with anything. If I had any trouble with a scene, or I don’t know how to deliver it, I’d go to her and she’d tell me what she’d thought of how I should do it. She’s not a criticizing person at all. So, it’s more really just helping me understand the scene.

Q: How difficult was it to chop your head for the role?

Q: What’s your message for Eleven?

Millie Bobby Brown: Slow down with what you’re eating, you could get indigestion.

Q: So what attracted you to the character, Eleven?

Millie Bobby Brown: I didn’t relate to her in any way ‘coz I talk a lot, I’m very happy. The opposite. I don’t know why I felt sorry her when I read the script and for some reason I wanted to be a part of this project, and that’s the reason why I wanted to cut my hair off because I wanted to show my dedication for the show. I sort of fell in love with the characters on the first day of shooting.

Q: What trait of Eleven did you like the most? How do you feel that the strongest characters in the show are women?

And yeah, it’s great that we have women, you don’t really find a heroine in a movie, so it’s quite refreshing to read something like that. ‘Coz Winona, her character Joyce, she’s like a mirror also. She’s trying find her son, she’s going through everything to go find him. So it’s very nice.

Q: What happens to Eleven in Season 2?

Q: What are the similarities between you and Eleven?

Q: Where you surprised How does it feel that Stranger Things has created a new cult generation?

Millie Bobby Brown: It feels great. The Duffers wanted an homage to the 80’s, not copying it. I’m happy how it turned out. We were respecting Spielberg and King. It feels good. I liked watching it and we’re not copying them, we’re just thanking them. I wasn’t surprised when I was reading it, but when I was watching it was surprised.

Q: Which is your favorite episode?

Millie Bobby Brown: I like episode 1. For some reason, I just love seeing all the characters. In the episode, I come in right at the end, so I like watching all the beginning. The reason why I like episode 1 the most is because it opens a lot of jars, and you know over the series you start to fill them. So it’s like, I have no idea what’s going on just yet, and then you start to realize what’s happening. That’s what I like.

You can check out the full video below.