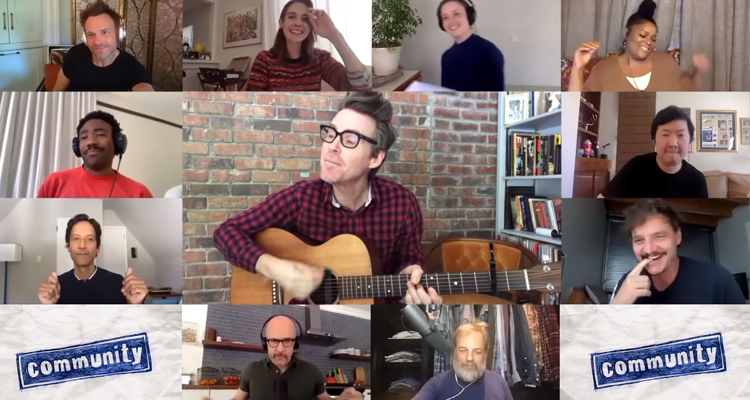 Imagine forcing the Mandalorian say virile sperm more than once

If there’s one thing a geek/nerd/show aficionado should be thankful for with the current situation we’re facing, it’s the reunion of the original Greendale 6 even if it’s just a virtual table read.

They were able to bring in Donald Glover (Troy) to join Allison Brie (Annie), Joel Mchale (Jeff), Gillian Jacobs (Britta), Yvette Nicole Brown (Shirley), Jim Rash (Dean Pelton), and Ken Jeong (Ben Chang) along with Dan Harmon, and the Mandalorian himself, Pedro Pascual as they do a table read of the season 5 episode, Cooperative Polygraphy where the episode sets up Glover‘s exit from the series via Pierce Hawthorn‘s (Chevy Chase) last will where he will be bequeathed Troy his share of Hawthorne Wipes valued at over $14 million if Troy Sails the whole world on Pierce’s boat, the Childish Tycoon.

Dan Harmon was narrating while Jim Rash was playing a different character named Mara, while Pedro Pascal played Mr. Stone which was originally played by Walton Goggins’ the Polygraph expert.

You can watch the table read below:

The virtual read was done to raise funds for the World Central Kitchen fund to help and provide food for the COVID-19 frontliners.

The virtual table read was a good throwback to the episode and it’s been nice seeing Glover return to his Troy character after he left the show midway through season 5. And to be honest, the show wasn’t the same anymore when Glover left.

You can now rewatch (or watch) Community (in all it’s 6 seasons) at Netflix.