The ROG Strix G line is without a doubt one of the best-looking gaming laptops in the market. The streamlined design and beastly internals make this laptop a formidable competitor in the gaming notebook space. Fortunately, ASUS has been kind enough to let us test drive the ROG Strix G to help us give you an informed decision. 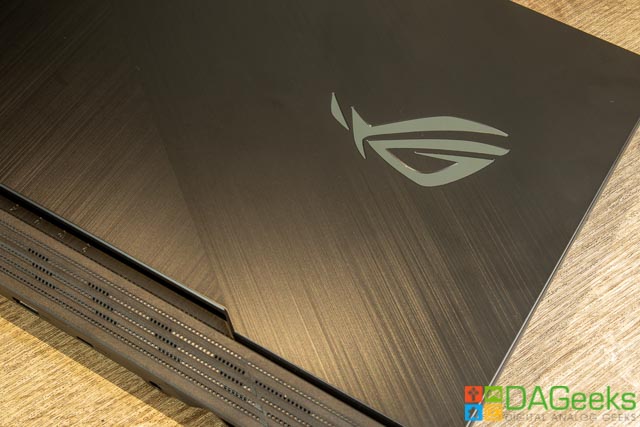 At first glance, you wouldn’t think of it as a gaming laptop, unless you’re familiar with the ROG logo. ASUS collaborated with the BMW Designworks Group to mold form and function. Every aspect of the design has been carefully thought out and they call this the 3D Flow Zone. The aluminum ridges on the lid actually directs airflow to hotspots on the laptop keeping the ROG Strix G cool and prevents thermal throttling. ASUS also claims that their fans have a self-cleaning cooling system, which we weren’t able to test as it will require for dust to settle in for a while. They say that their engineers designed a special anti-dust tunnel that catches and channels particles outside the chassis to prevent them from collecting on the fins. 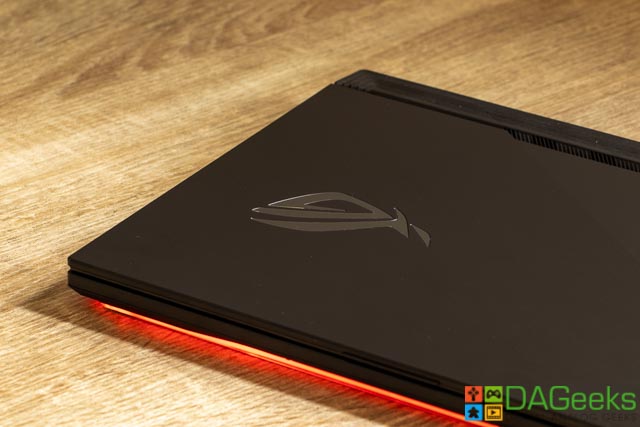 For a laptop with such specs, the ROG Strix G is thin and light. It’s amazing how they can fit that much power in a small chassis wherein considering 2 years ago, I was reviewing gaming laptops and found them to be very bulky and impractical to carry around. They were more of desktop replacements than portable gaming machines. Then again, this laptop is 26mm thin and weights 2.5kgs, power brick included. 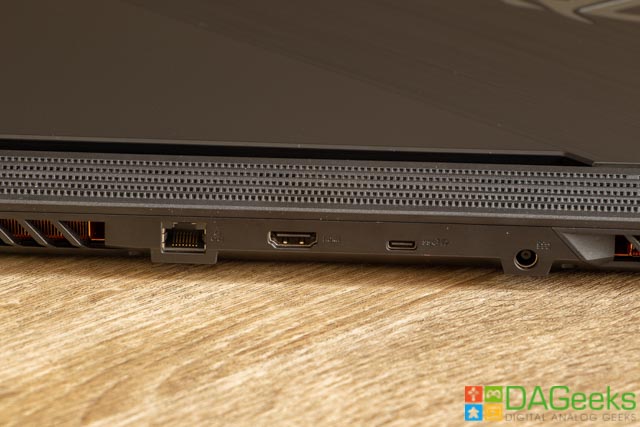 Moving to I/Os and ports, the ROG Strix G has plenty. On the back, you’ll see a gigabit LAN port, a full-sized HDMI 2.0B, a USB 3.1 Type-C, the power adapter port and a couple of vents. I do hope that this placement of ports become standard as putting them in the back side of the laptop means cables are easier to manage. Also, ASUS, a DisplayPort would be nice. On the left, you have a trifecta of USB 3.1 Type-A ports for your accessories. Hooray for not having to carry a dongle! And a 3.5mm headphone/mic jack. Nothing to see on the right side except for vents, which is a terrible placement in my opinion, unless you’re a left-handed gamer. 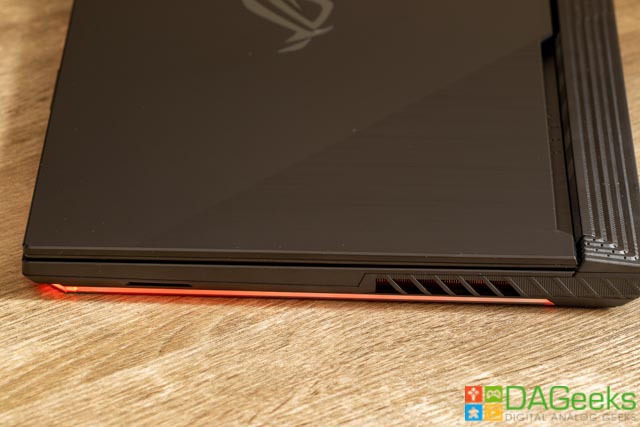 ASUS, this side is where right-handed gamers place their mouse, and it’s not very friendly to have toasty fingers after a gaming session. The downfiring speakers leave a lot to be desired. It is loud, no question about that, but the positioning makes it bounce on whatever it’s placed on and makes it sound like you’re in a cave. 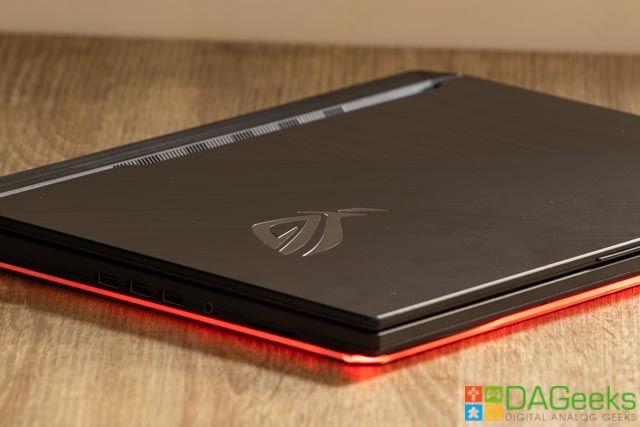 Opening up the laptop, you’ll finally see what makes it a gaming laptop. The light bar under the chassis is Aura Sync capable, so is the 4-zone RGB keyboard, and just screams RGB IS LIFE. The keyboard keys have translucent edges and the WASD keys are transparent for easier navigation during dim situations. Aura Sync also lets you connect your compatible devices for a more custom lighting experience. 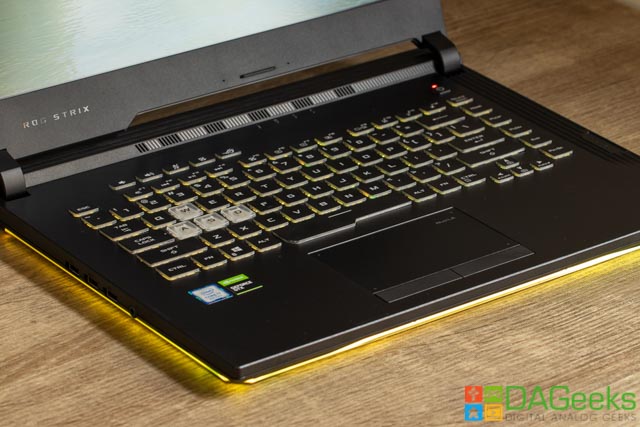 The ROG Strix G is made up of mostly plastic, which gives it its characteristically light weight. The laptop in itself is sturdy and solid enough to handle daily abuse. Though I wouldn’t call it military spec as there’s some flex in the keyboard and a little bit on the LCD. The hinges are tightened just about right though where you can lift it with a finger and hold its position for long periods without slacking. 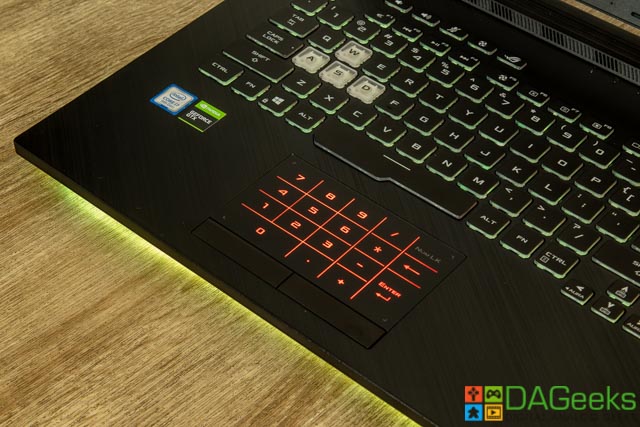 The keyboard is a delight to use. It’s not a mechanical keyboard, again, making it light weight, but it has a satisfying feedback that you wouldn’t mind the construction. ASUS calls this the Overstroke technology wherein keypresses are registered earlier in the stroke, giving you a more responsive typing experience. You’ll notice that even if this one is a 15” laptop, it’s not equipped with a full keyboard, but if you look at the touchpad, you’ll see a NumLK button. 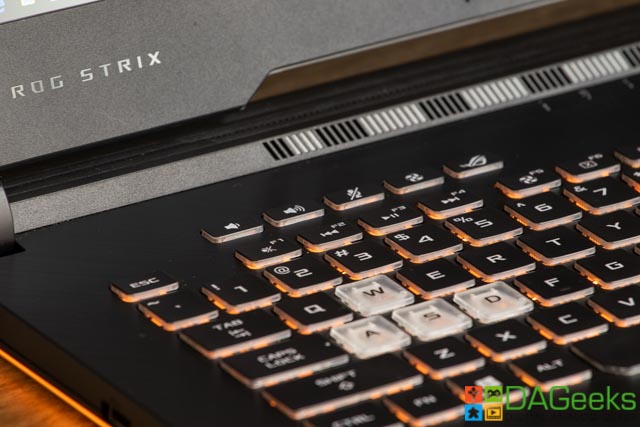 Tapping the NumLK button reveals a numeric keypad on the touchpad itself, not leaving you wanting. The keyboard is more tailored for gaming as it has the gamery font and accentuates more frequently used keys in gaming. There are gaps between the function keys to prevent pressing the wrong F key and the space bar has an extra lip to be easily reached by your thumb. There are 5 dedicated keys above the function keys which are volume controls, mic mute, performance mode and ASUS’s proprietary Armoury Crate software.

The 15.6” IPS panel runs at 1080p resolution with a refresh rate of 120 Hz. The fast refresh rate gives you a stutter-free experience and minimizes eye-strain. The IPS panel gives you a more accurate color representation and better viewing angles. Playing with shooters and racing games or other fast-paced action games in this monitor is certainly an eyegasmic experience. Looking at the screen though, you’ll notice that the ROG Strix G doesn’t have a webcam. Understandable, since if you’re serious about streaming, one of the first things you’ll need is a high-quality external webcam. Or not, as there are streamers who are successful without a face cam.

The ROG Strix G comes in many configurations, as you’ll see in their website. They have a variety to choose from which fits your budget and your needs. Anyhow, this unit that ASUS sent us is the G531GU-AL001T variant which is equipped with an Intel Core i7-9750H 6-core CPU, an NVIDIA GeForce GTX 1660Ti GPU, 8 gigs of DDR4 RAM, a 256GB M.2 NVMe SSD and 1TB of HDD. It comes with an ROG Strix Impact gaming mouse and a backpack, though ours didn’t come with the bag. This configuration will set you back 89,995 php, and can definitely run your favorite e-sports titles without a hitch. 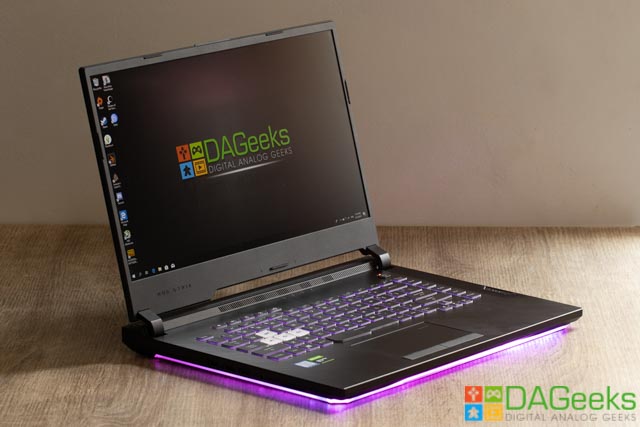 The ASUS ROG Strix G is definitely a beast of a machine that goes to the gym everyday because of its light weight and performance. For the price, you get the best out of your money. ASUS includes an ROG Strix Impact gaming mouse and an ROG backpack for every purchase. If you don’t have the budget for a Zephyrus, then consider the ROG Strix G as your next companion. Though there are features left out, it’s all for the benefit of making this machine light weight and cheaper than most in its price range. The battery life is something to be desired, but again, battery technology has been on the slower side of development. You wouldn’t game on your battery though, so just make sure there’s a power outlet nearby and fire up your ROG Strix G.