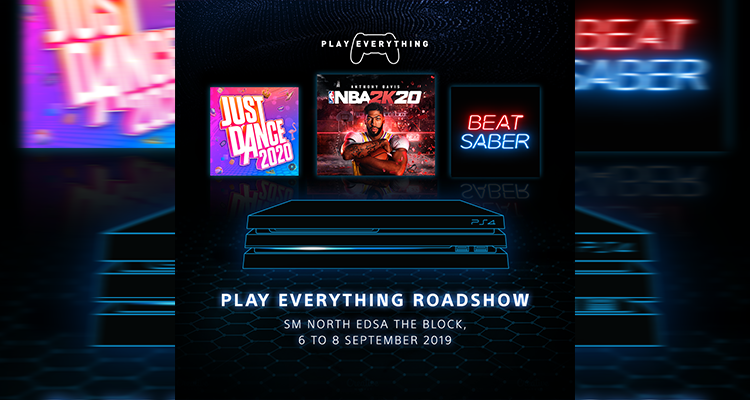 Get to Experience Beat Saber VR, Crash Team Racing and Meet PBA Stars at the Play Everything Roadshow This Weekend

Be among the first to experience the hottest games and latest titles as Sony Interactive Entertainment Singapore Private Limited (SIES) announced the return of the Play Everything Roadshow happening from September 6 to 8, 2019 at The Block, SM City North EDSA.

Various awesome game demos are waiting for Filipino families and visitors such as NBA 2K20, one of the most anticipated games of the year packed with all new features, gameplay upgrades and advanced moves. Coinciding with the worldwide launch of the game, Sony will also release a special NBA 2K20 Bundle Pack at a promotional price of 19,990 php.

The bundle includes a PS4 system (Jet Black) with 500 GB HDD, two Dualshock 4 wireless controllers, Blu-ray Disc version of the NBA 2K20, and a one-year extended warranty service. Consumers who will grab this bundle at the road show will get a chance to win premium jerseys.

Other games that attendees can try are Beat Saber VR and Crash Team Racing.  Visitors will also get an exclusive sneak peak of the hit dance rhythm game Just Dance 2020 set to be released this November.

PBA superstars LA Tenorio and Jeff Chan of Ginebra San Miguel will also make a special appearance on September 8, 2019, from 3:00PM to 7:00PM. Basketball and sports fans in general will get a chance to meet-and-greet both players and even play with them!

If you’re looking to do something or add a little fun to your weekend, head on over to The Block at SM North EDSA from September 6 to 8, 2019, 10:00AM to 10:00PM. The Play Everything Roadshow will be open to the public and will be free of charge.