Agents of S.H.I.E.L.D. Season 4 Episode 4 “Let Me Stand Next to Your Fire” | DAGeeks Epsiode Review

I would have to say this is my favorite episode of Season 4. We finally find out how the Watch dogs have been tracking down the Inhumans. We get to see Hellfire again, who I very much enjoyed watching in the previous season.

In this episode Daisy finally returns to the team, which I think is long enough. She seeks out the help of Simmons, and try to warn James aka Hellfire about the Watch Dogs targeting Inhumans through the communication watches. In a not so surprising plot twist, we find out He struck a deal with the Watch Dogs and let them use his watch to hack into S.H.I.E.L.D.’s server to get the locations of other Inhumans. 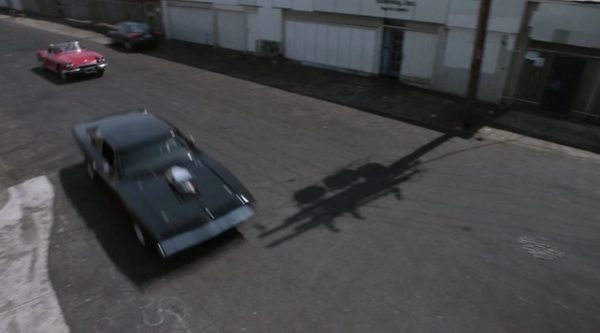 AoS’s Strong point is their great supporting cast, from Ward all the way up to Lincoln, and this episode is no different bringing James into the story which doesn’t feel out of place. Of course you don’t need to see previous seasons to know that he is bad news, but it does add more to the experience if you have. Ghost Rider again had the best scenes, bringing back his signature weapon the flaming chain. Another scene I enjoyed was the car chase scene between Robbie, and Coulson, Mack and Lola, and even how it ended. 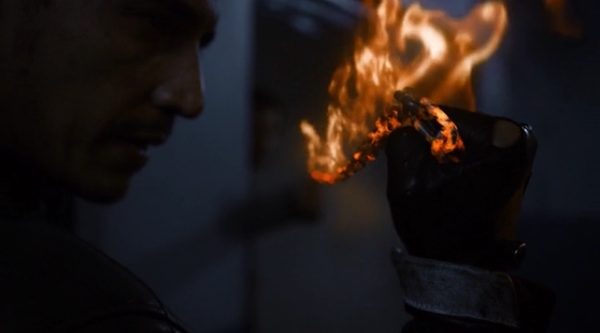 Robbie catching what will become his signature weapon

The episode ends with Daisy returning to the team along with Robbie Reyes helping out as well. We also find out at the end that the book that Lucy has been searching for may be the Darkhold, a book of Sins, Spells, unlimited knowledge. No one really knows what it is, though this seems to be a good foothold for the team to start from Science wise. 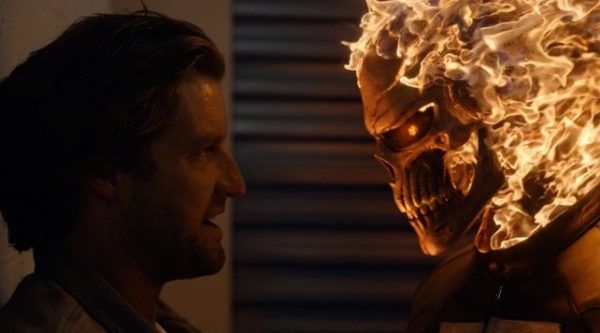 Face off between the two flaming chain wielders

Speaking of science, we are also shown Aida, Radcliffe’s android Assistant who has successfully fooled Coulson and May into thinking she is a real human being, while Simmons figured she was an android, and that story ending on a cliffhanger that she had a lie detection test the next day was really good in my opinion.

This episode really stuck to the series’s strong point which is the core members being together with the addition of Robbie Reyes working with them to find the Darkhold. Great action sequences for Ghost Rider, and the car chase as well. I really think they made a big step forward with how this story progressed.