The Valiant comics are back again after the bankruptcy crippled the company in the ‘90s. It was re-launched in 2012 and it is strongly marketing itself as the third biggest superhero universe after DC and Marvel. People are somewhat bored with the revamping and the reboots by these two monopolists in the superhero world. The content from the Valiant Universe is now the superhero’s fans new favorite.

Valiant has such a deep bench of diverse and relevant characters, which makes them easily accessible to fans around the world.

Valiant Universe has special content that keeps the fans glued.

Just like in DC and Marvel, Valiant universe is full of outstanding characters. Some characters have a resemblance to DC or Marvel’s characters. For example, Ninjak and Batman have almost similar roles, X-O Manowar and Captain America, the harbinger and the ninja mutants.

If you want a switch from what you have been watching for decades, the Valiant Universe has excellent characters. Although not all characters in the Valiant are superheroes, there is a sense of humour in other characters such as Woody and Quantum or Archer and Armstrong.

Valiant is aggressively marketing itself and will soon explode into greatness. Already, Valiant has announced its partnership with the Sony Company. The partnerships are set to film Harbinger and Bloodshot to big screens. Superhero fans should get ready for more, yet different and exciting superheroes adventures. 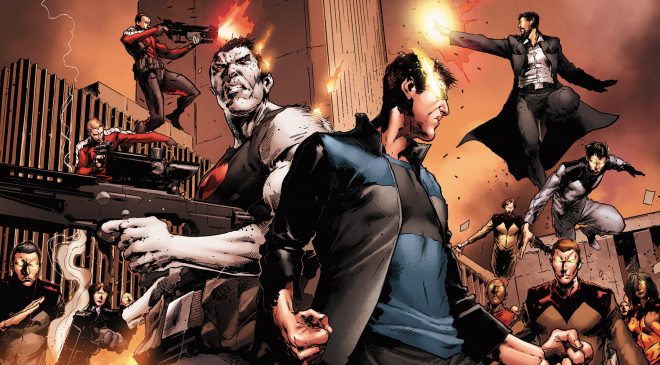 The Valiant materials are easily accessible and easy to read. Grab yourself a copy of Valiant Series and get familiar with the different superheroes. DC and Marvel have set the pace for the Superhero producers, it is easy for the Valiant to navigate the market with fresh content.

Although some characters may play roles resembling that of DC and Marvel’s characters, Valiant is careful to make their characters special and distinct. According to Valiant Entertainment CEO, Dinesh Shamdasani,

He says that their goal is not to compete with DC or Marvel, but rather creating characters that exhibit the tonality of the Valiant.

Valiant was recently launched in 2012, so it is quite small. The market monopolists the DC and Marvel release a lot of comics. Precisely, 40 to 60 series on a monthly basis. In its infancy, Valiant puts out only 20 series at a time. However, this is not a bad thing.

In fact, it works to benefit the company. The small number keeps the Valiant putting out fresh content. Fans get bored and tired of watching replicated and rebooted content from the bigger companies. New Valiant fans can start learning and understanding each Valiant character slowly.

According to Michael Rowe, an actor who will take on the role Ninjak as Colin King,

Their artwork is very different. I like when they do flashbacks. They take a more artistic approach. They’ll even take something of Colin‘s childhood and put it in a storybook as sort of visual art for that scene. I find that really refreshing.

If you are probably used to the same work of art from DC and Marvel, look out for fresh art from Valiant Universe. The Valiant artwork brings the characters to your world rather than you going in their sci-fi world.

Content from Valiant is fresh and exciting. Therefore, it is hard for the fans to predict what is going to happen next in Valiant. Each story is different and distinct in Valiant. In DC and Marvel, fans are able to predict what is going to happen in the next series. A fan will easily predict the status quo of superheroes such as Batman or Spider-Man. For instance, the fans already know who plays the role of the Batman–Bruce Wayne.

According to the director of Ninjak vs. the Valiant Universe, Aaron Schoenke,

Just like Marvel and DC, Valiant Universal has content is friendly for all audiences. The content is socially and politically relevant, therefore, it appeals to the older audience. Although the kids can watch, stories such as X-O Manowar and Bloodshot is for adults. The story is illustrated in a mature and intense style that is suitable for adults.