Immediately after #4, #5 deals with Vader entering Cylo-IV’s base. However they find 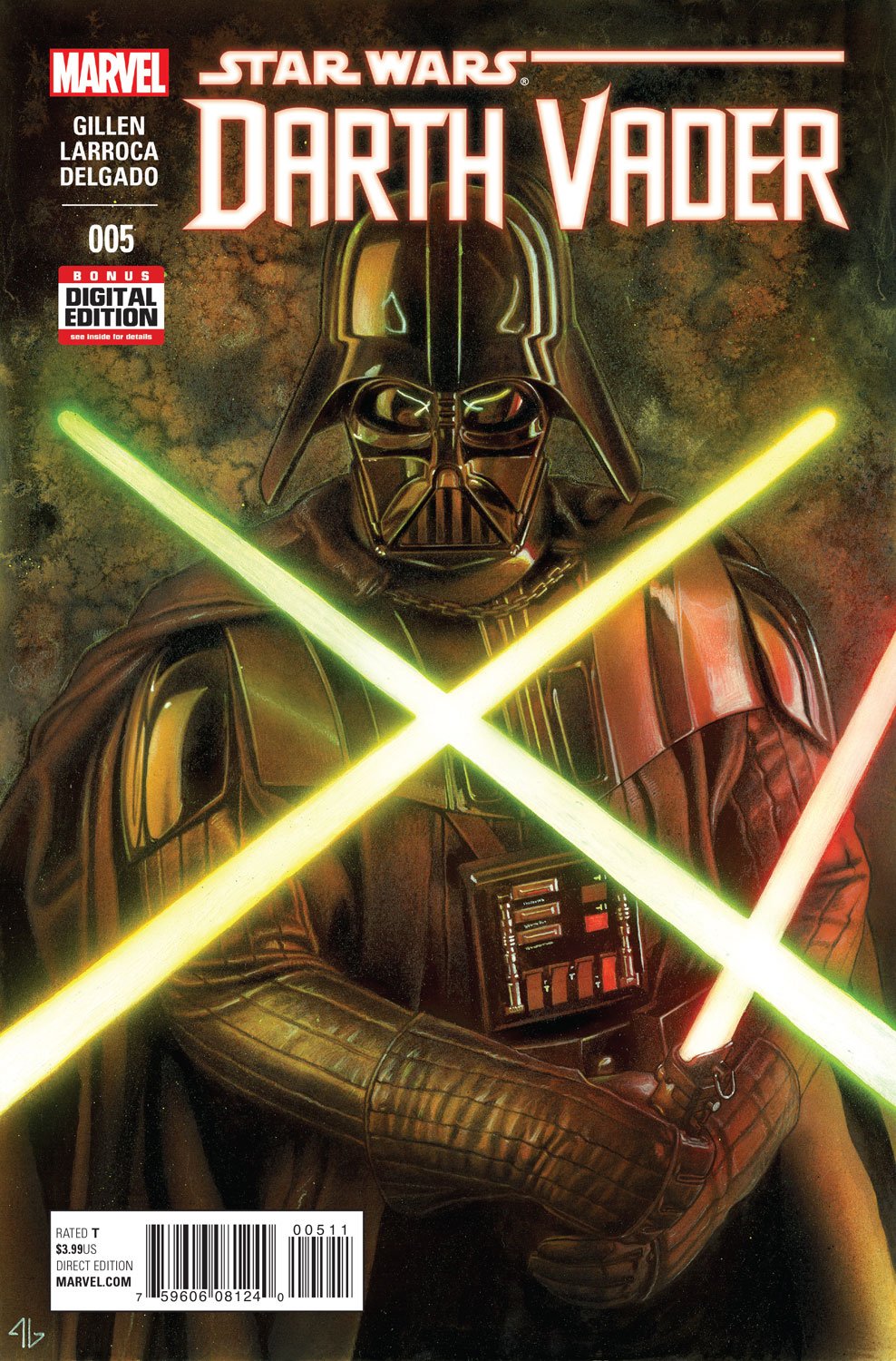 that the base is quite interesting, as it’s a mesh of mechanics and large, whale-like life forms, all introduced in an incredible splash page. Vader even goes as far as calling the base an abomination. And as Vader & the droids prepare to leave their ship, Aphra then tells Vader, “May the force be with you,” then notes to herself this is the greatest job of her life. The infiltration begins, and everything goes south for those on the base as visualized with great build-up of suspense.

Aphra tells him of two areas, the barracks & the Dojo. Vader then commands his second platoon to the dojo, and the first the with him to the barracks. Vader encounters resistance in the barracks, but none of any consequence. Aphra reports that she had lost contact with second platoon, and Vader quickly goes to the Dojo only to find 2 humans named Morit and Aiolin, armed with lightsabers. Vader quickly notices that when Morit closed the door behind them, that it was not the use of the force, but instead trickery. Despised, Vader says that the force is weak with them, and that they are no Jedi nor Sith. This leads to an incredibly well-organized layout of the fight, even if it was quite brief. The fight is interrupted when a seemingly alive Cylo-IV enters the scene, telling them to cease fighting. Cylo-IV introduces himself as Cylo-V, the next body prepared for when Cylo-IV didn’t return.

Cylo-V brags that he created a personality map to be simulated efficiently, that he is something new, and far from human. Vader tells Cylo that he knew of Cylo’s apprentices, but then notes that none of the Force is in them. Cylo-V clarifies that they were not to be apprentices, but replacements. He then introduces the rest of the replacements. Vader quickly dismisses Cylo-V’s creations as blasphemous, but Cylo tells him that none of this has to do with the force. This immediately had Vader reach for his saber and was about to attack Cylo, when Emperor Palpatine tells him to stop. Cylo tells the emperor that he is here to prove that Palpatine only needs an apprentice in a ceremonial role, and his creations are here to prove it. Palpatine tells him, “Enough grandstanding, Cylo. You have my presence. Show me something worthy of my attention.” To which, Cylo’s creations begin to pursue Vader, and the fight begins…in the next issue. 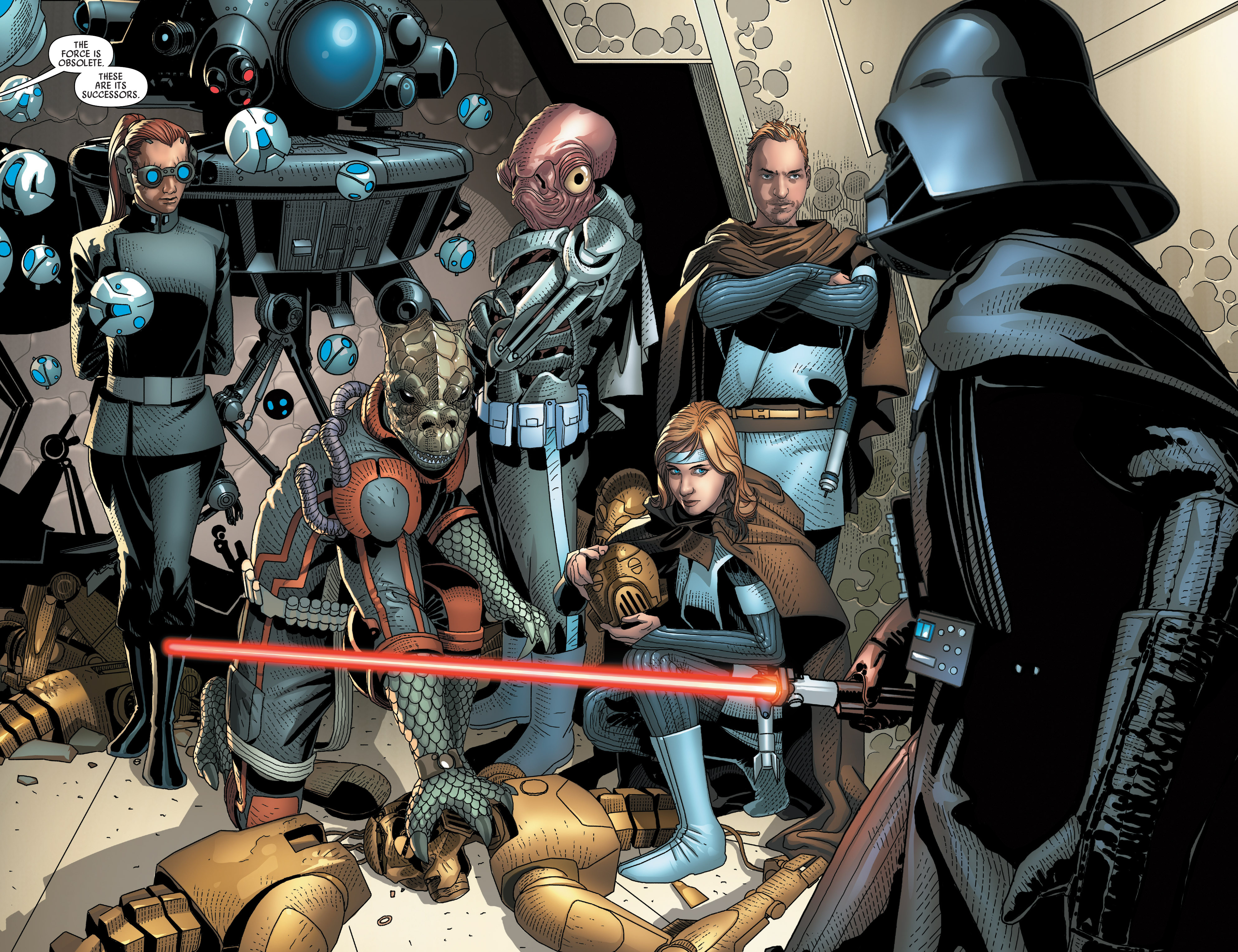 Man, what a cliffhanger! The storyline and the art has just been on a roll since last issue. This issue has really focused on the idea of man and machine, and what happens when they’re mixed together. What’s so special about this certain issue were the detailed splash pages. Larroca and Deodato have outdone themselves on this issue. The layout was outstanding, and each moment was just filled with tension. Kieron Gillen does a smart job of pulling the reader into and out of action as quickly as it gets entertaining, making the reader yearn more. However these small doses aren’t exactly toxic, as all is just build-up for a much more action-filled issue. An issue can’t always have action, and things do need to build up to make action scenes have more meaning.