They aren’t droids to her. They’re children.

This issue walks into Aliens territory as a visit to a droid factory in Geonosis turns terrifying. A surviving Geonosian queen apparently has a droid factory from which Darth Vader and his team were to steal from. The planet has been revealed to be sterilized. Aphra sends the two droids ahead of them, and asks Vader if he’s ever been to Geonosis. Flashbacks go through Vader’s head as Vader tells her to “cease your probing.” As the droids map the route they encounter a horrible hybrid of droids with what seems to be wings and other organic material. Triple Zero comments on whether those droids spoke Geonosian hive-mind, a language he apparently is fluent in. With nothing to say, he tells BT-1 to furiously fire at them. This leads to my favorite moment, as Triple Zero says, “Oh, no, actually a few words do spring to mind! <Hahaha! You are on fire and also dead.>”

Aphra and Vader venture on deeper in the cave, confirming that there is an active factory down there. Aphra assumes that the sterilized queen turned to science to turn the droids into her children. They then get to the queen’s lair, in where they saw a whole room of eggs along with the queen. Vader drops down to where the queen was and slices off her womb, to which a fight ensues as the queen summons her children to stop them. Vader, surrounded by droids, commands BT-1 to fire at the droids. Aphra drops down to Vader, worried that Vader may have been shot down along with the droids. Amidst the chaos is Vader, alive and well. The group escapes the planet with the machine that produces the droids in Vader’s ship. Mission complete!

Later on, they get to Aphra’s ship to where we see Aphra work on the machinery producing droids. Triple Zero then suggests some more enhancements on the droids, to which Aphra tells Vader that the droid has unconventional theories about self-improvement for droids. It was this reason that had his consciousness locked away. She confirms that Vader will soon have his droid army, and asks Vader if he was planning to kill him now or later. She figured that Vader would have no use for her now and told him that she’d like the lightsaber right through the neck: no warning, nice & quick. Vader only responses by staring deeply at her, then tells her that she has proved to be resourceful and still has use for him. Vader warned, however, that if he is blackmailed, her life would end. Aphra tells him he can trust her and understands that Vader needs to win, since he fights for a higher cause. Triple Zero interrupts as he seemed to receive a signal from the bounty hunter Krrsantan, the one Vader assigned to find Palpatine’s agent. 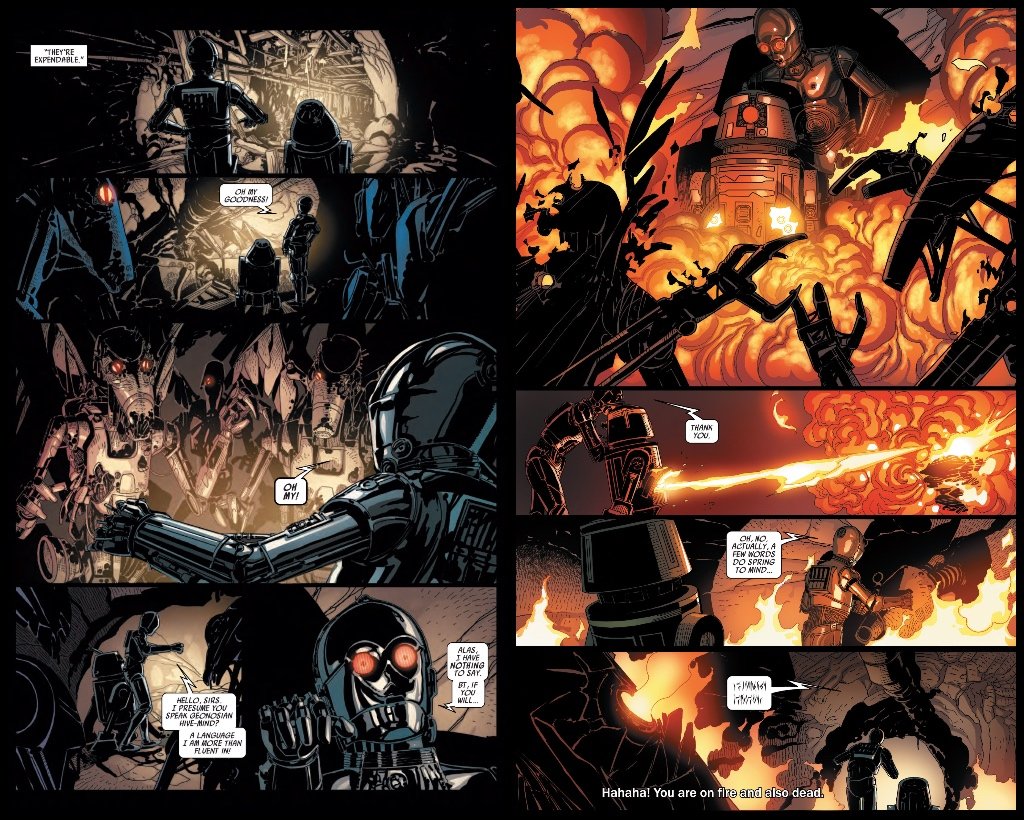 Vader comes to see Krrsantan with the agent he’s been looking for, who boasts that he won’t nudge any information. Darth Vader then tells the agent that he has no time for this, and instead left the interrogation to Triple Zero, to which the droid happily complied with. Triple Zero later reported to Vader that he was able to get information from the agent, but the agent was killed in the process of interrogation. He says that the man was named Cylo-IV and has known the location of his research base, & the nature of commission from Palpatine. Triple Zero continues to tell him the base’s details, even saying, “I’m sure you’re very interested in meeting your rivals,” explaining that Vader has competition. The group set course immediately for the base.

This issue has to be one of my many favorite issues in the whole series. I’m affectionate towards the Alien franchise, and the fact that this story played out of Aliens made me feel somewhat giddy. It also explored a lot of Triple Zero and BT-1. Triple Zero remains to be talkative like C3PO, and BT-1 talks with guns instead of beeps. The art plays well in this issue with the looming Vader and the terrifying droids. Adi Granov’s cover is quite unsettling, but it makes you wonder—does the terror come from the droids, or from Vader? There seems to be a lot coming for Darth Vader in the future, and we’ll just have to see how he deals with it. Makes you wonder how he plans to deal with all these characters since they don’t
appear in Episode V.