I have a son 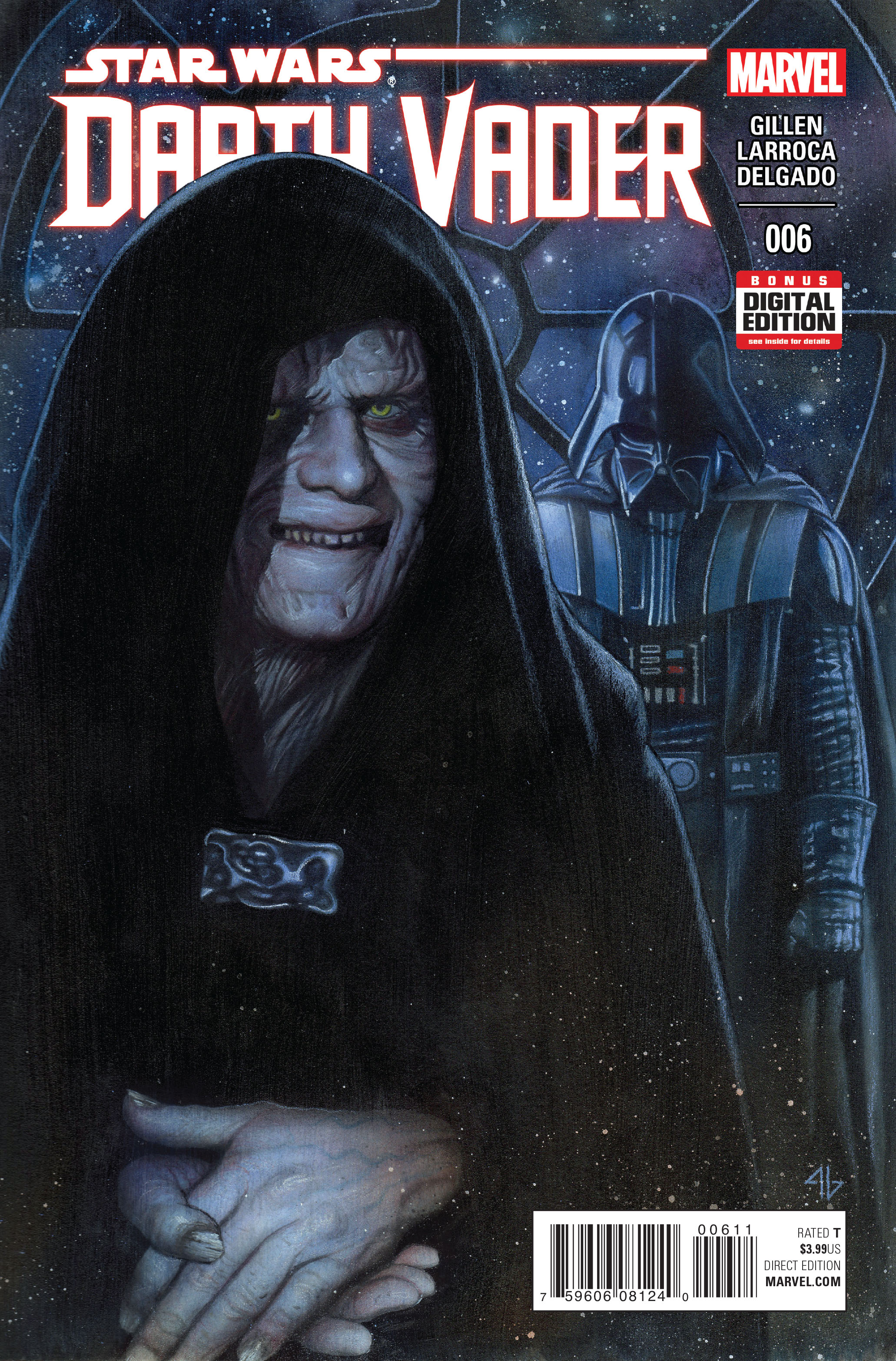 All the build-up of the last two issues have been leading to this. Darth Vader and Cylo’s technologically advanced warriors spar as Cylo explains to Palpatine the details of his warriors. Palpatine demands a real demonstration on which the creations and Vader fight to the death. Larroca delivers in this fight scene, as he’s able to draw figures that actually seem to move and aren’t so stiff. Vader then duels the Trandoshan in a grave fight which leads to Vader being in the open for attack. As the Trandoshan was about to strike Vader, Morit, ends the Trandoshan’s life. Palpatine then commands the fight to cease, as it has “…Thinned the herd sufficiently.” Vader tells Morit that he would not forget what he did that day, but only because he interfered in their fight. Palpatine tells Cylo that he can definitely use the creations, but warns them that he only needs one in the end. Everyone then departs, with Vader coming with Palpatine.

Palpatine explains he is impressed by Vader’s actions outside of his command, even saying that he perhaps will triumph over Cylo’s creations for having such initiative. Vader comments on Cylo’s creations once again, saying that they are abominations. Angered by Vader’s comment, Palpatine tells Vader that Vader stands there with him, more metal than man, and yet talks of abominations. “Everything is of the force,” Palpatine further rebuked. “Do not underestimate how much you disappointed me on Mustafar.” It was at this point Vader realizes that Cylo had been training the twins for 20 years, which meant that Palpatine considered to replace Vader all along. Palpatine then goes on to explain the philosophies of the Sith, saying that the Dark Side is strength. If defeated, you are not strong, if you defeat them, it proves you are. He then challenges Vader that if he’s proved himself worthy of his name, he can prove himself again.

Shocked and broken by Palpatine’s comments, Vader heads immediately back to his ship, demanding silence from Aphra. They receive a message from Boba Fett, saying that he has caught up with the boy and wanted to report. Boba Fett later shows up and tells Vader the pilot’s name: Skywalker. In a very dramatic sequence, Vader begins to reminisce to his days with Padme and he remembers the birth of Vader, as the emperor tells him that his wife had died because of his anger. He now realizes this lie, and it angers him so greatly that the window and the machinery around him began to break. Furious, he immediately heads to his private room to talk to Palpatine. Palpatine senses his anger, and asks Vader, “Have you something to say? Some proud, defiant words? Or are you wise enough to know your place?” Vader relaxes once again, telling Palpatine that it was his anger that brought him to his master, and that he will not fail him, and he ‘understands us (Him & Palpatine) precisely’. Vader goes back to stare at the broken window, thinking about Padme and the boy she carried. 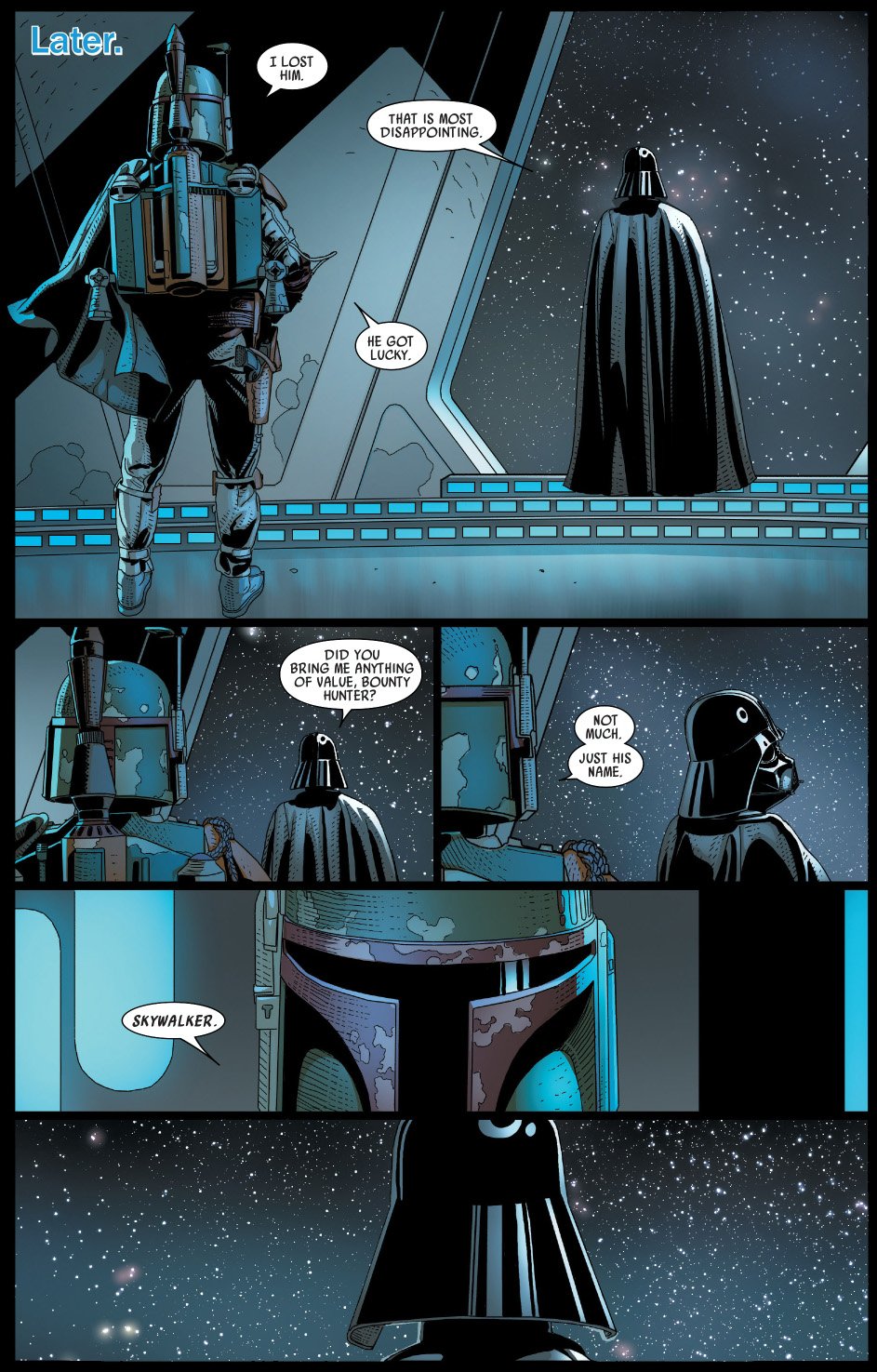 The action quickly died down, but the issue made up for it by having such an emotionally intense story. I believe that the fight itself was fought on two sides: Cylo’s creations only fought for favor, but for Vader, this meant something more. He’s a failure in Palpatine’s eyes, and he needs to prove himself otherwise, that he was as powerful as he was loyal. This issue also provided us more info on the philosophy on the Sith, that it relies on strength, and the ways used to attain this strength doesn’t matter as long as it proves strength. Case in point, when Vader realized that Palpatine lied to him, that Padme died, he became fueled by anger. “My anger brought me to you,” was not just literal, it was profound for Vader. This anger provided great strength for Vader, and that is I believe that the reason why Vader told Palpatine that, “And I understand us precisely,” is because Vader understands that what Palpatine does to Vader is for fueling his power.

The fact that Vader would get shocked and repelled by what Palpatine told him, showed weakness in Vader. I felt very sympathetic for the guy. Kieron Gillen continues to do quite a great job at writing Vader, being able to flesh him out without weakening his strong character. Salvador Larroca’s art has quite improved from the previous issues. He also manages to capture the heartbreak and anger of Vader (whose mask shows no emotion at all) throughout the whole issue, so kudos to him on that part. My only complaint is his drawing of Luke Skywalker near the end of the comic, whose neck looks broken.