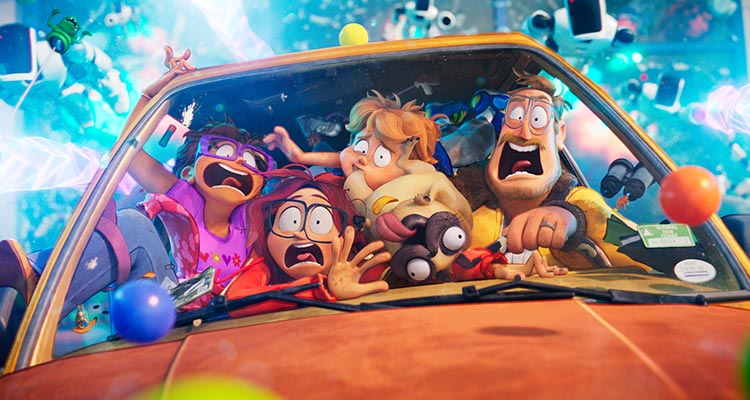 The Mitchells Vs. The Machines

The Mitchells Vs. The Machines is a brand-new 3D animated film brought to you by Sony Animation. This is from the same studio that also brought Spider-Man Into The Spider-Verse to the big screen and on streaming service. If you enjoyed that movie, then you definitely will enjoy watching The Mitchells Vs The Machines as well. It’s an amazing action-adventure comedy that I personally enjoyed watching and hopefully, you will too.

The movie centers around the titular Mitchell family who finds themselves the last people on earth during a robot apocalypse. The family is made up of Rick and Linda Mitchell and their children, Katie and Aaron. The movie is told from the perspective of Katie, just before she heads off to college and how she deals with their dysfunctional family. She has a particularly strained relationship with her dad that becomes central to the plotline of the entire movie.

Meanwhile, we are introduced to Mark Bowman the head of a global tech giant and creator of a smart digital assistant called Pal – which is suspiciously like a certain another global tech giant we know today. This is where his creation eventually decides to take over the world and give rise to the machines. And if you’re thinking of another movie where machines rise up against their human masters, you’re not alone.

It is throughout this journey that the Mitchells face their biggest challenge ever and learn that they are in danger of being completely overrun by robots and that they must band together as a family regardless of their obvious dysfunctions, which are played for laughs quite often in the film.

The Mitchells Vs. The Machines actually has some of the best comedic writing I’ve seen in recent years, especially for an animated film. There are many obvious tropes that are played to perfection without it being too obvious or on the nose. The references in this movie are so blatant at times but it comes out really funny rather than just a simple joke played up for laughs. I like that the script can be at times very self-referential and is quite aware of the jokes and even sometimes the commentary it has about today’s modern society especially when we are talking about technology. I like the digs it makes on current net culture and how everyone has become so dependent on technology which is a sad reflection of reality but at the same time really really funny to see on-screen.

The film also has a really good voice cast led by Danny McBride as the patriarch Rick Mitchell and Maya Rudolph as Rick‘s wife Linda. A few other notable voices here include Eric Andre as Mark Bowman, Olivia Colman as Pal, the digital assistant, Fred Armisen, Chrissy Teigen, John Legend, and even Conan O’Brien. Their voice work is done really well and you can feel the emotions of all the characters through the voice actors. I give extra props to Danny McBride which I honestly didn’t recognize at first. Who would have thought that this guy would play a family man in this animated film, right?

The animation has been also quite spot-on especially since they are the same people who brought Spider-Man Into the Spider-Verse. They were actually also responsible for the Lego Movie as well. The animation style is crisp and clean, the sceneries and colors are amazing and they make good use of lighting for its day and night scenes.

Overall, The Mitchells Vs The Machines is a great family movie that anyone can enjoy. It’s got clean fun, great comedy, tons of pop culture references, and relatable characters. It’s relatively fast-paced and would actually make you want to see more. It has great replayability and it’s something you can kick back, relax and enjoy with family or with friends. I’d give this movie five stars for story, animation, and voice acting. The Mitchells Vs. The Machines is currently streaming on Netfilx.

The Mitchells Vs. The Machines
Screenplay
80
Casting
95
Soundtrack
90
Visuals
90
Reader Rating0 Votes
0
DA Good
Great writing especially the comedy is very spot on.
Wonderful visuals and graphics for the movie.
Story and overall plot is feel-good and great for families.
DA Bad
89