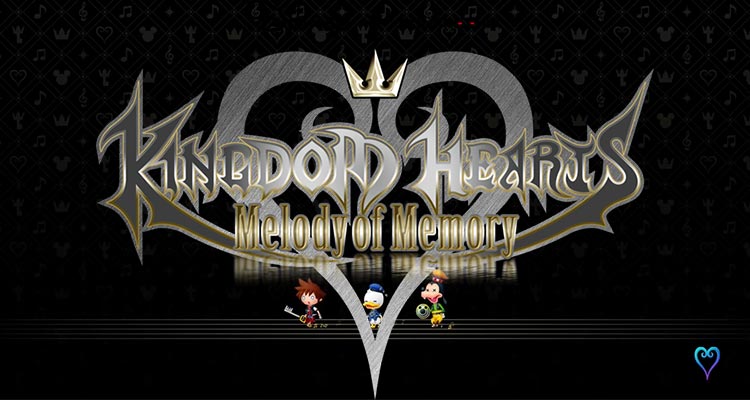 What began merely as a token crossover of Final Fantasy and Disney has become one of the most beloved franchises in recent video game history. Though a lot would complain over its convoluted plots, each installment of Kingdom Hearts has proven to be a fun expansion in terms of both lore and gameplay. Fresh off the heels of the last major installment – Kingdom Hearts 3 – Square Enix released a rhythm game spin-off called Kingdom Hearts: Melody of Memory.

KH:MoM acts as a sort of catch-up episode for the entire series. Players go through the entire timeline of the franchise so far (following the order in which they’re released) with Kairi narrating and giving an overview of the games’ events. It is later revealed that the game is more than just flashbacks and synopses. Following Sora’s disappearance in KH3, Kairi has been put into a deep sleep and she explores her dreams and memories for clues to Sora’s whereabouts within her heart. This is then followed by a series of events that leads her to prepare for what appears to be the next saga of the KH storyline.

Gameplay-wise, MoM is a brilliant reinvention of the rhythm game formula by combining it with action-adventure elements – which makes it almost feel more like a beat-em-up brawler. You have your characters running across the stage with hordes of enemies coming toward you, and you have to attack them, use abilities, and dodge them to the beat. It’s actually quite reminiscent of that iconic scene from the intro of KH2 where you have Sora and the gang running up a flight of stairs, fighting Shadows. 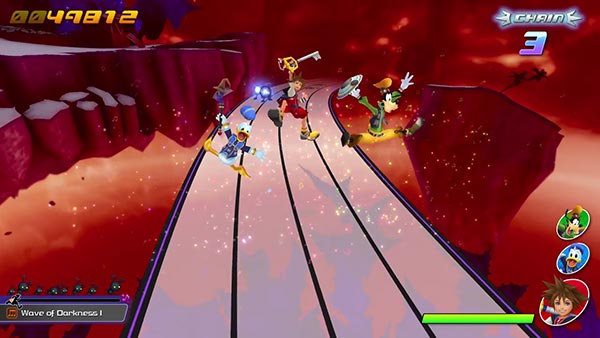 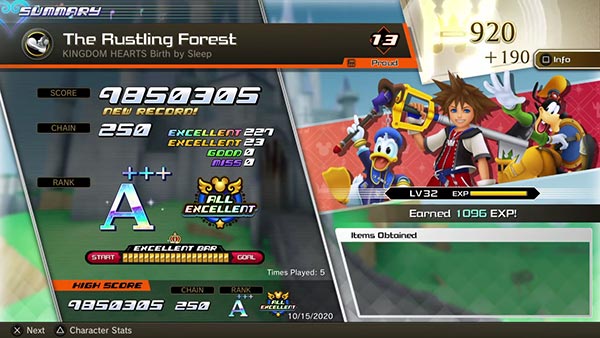 What I like about the gameplay is that it doesn’t require you to be a rhythm game veteran like most rhythm games often do. MoM recognizes that its player base would most likely just be RPG players and, as such, gives a lot of leeway when it comes to progressing through the game. Being a rhythm game novice myself, I was at first daunted by the idea, but I was pleased to find that you can unlock and progress through most content by playing in Beginner mode. There would only be a few features and challenges gates by the difficulty level, but otherwise, everything essential is accessible to rhythm game noobs. 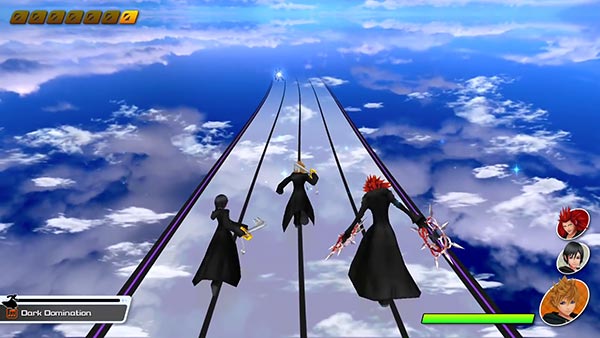 Of course, this doesn’t mean that it doesn’t present itself as a worthy game to rhythm game veterans. Beyond Beginner are Standard and Proud modes which should provide them with the dizzying difficulties most rhythm game fans are accustomed too. These also come with the Performer option which adds more enemies and button sequences to the chosen difficulty should the player wish for more challenging runs.

As for the levels themselves, MoM has a feature that allowed me to ease into it quickly. Unlike most rhythm games where you’re required to hit a specific button at a specific timing (which can understandably become quite frantic once you involve all the face buttons and shoulder buttons of a controller), MoM features a multi-to-one button that allows you to use (on the PS4) the O button, the L1 button, or the R1 button to hit any note. This means that a lot of players won’t panic by trying to quickly react to which button to press. All you have to worry about is the timing. The game does sometimes require you to push any combinations of those 3 buttons at a time when simultaneous notes appear, but otherwise, this feature takes a lot of the pressure off and allows more casual players to enjoy the game more. The game also incorporates using the triangle button for special abilities like in most KH games as part of the sequence. 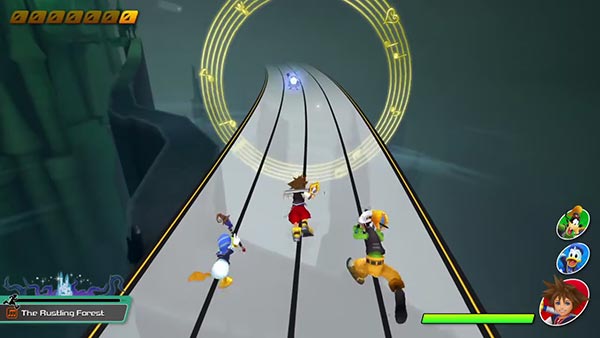 Another innovative feature is the incorporation of jumping and gliding. There will be some notes and enemies that can only be struck while in the air. What’s amazing about it is that these targets do not require the jumps to be part of the beat. You can time a slow jump into the eventual hit or do a quick jump and hit out of beat. Leniency is provided to give you more control over how you want to play the game. Jumps and glides are also incorporated as there are actually elements in the game you have to avoid such as projectiles from incoming enemies.

If I had to nitpick about anything about the gameplay, it would be that it follows a more visual rhythm than it does to the song featured on the stage. There would be some instances where the song feels too slow for the action happening on screen, or you would have to do certain button sequences outside the beat – leaning more into you reacting to visual cues rather than the rhythm.  But i feel that that’s actually another layer of depth to the gameplay which makes MoM a lot better than the typical rhythm game. 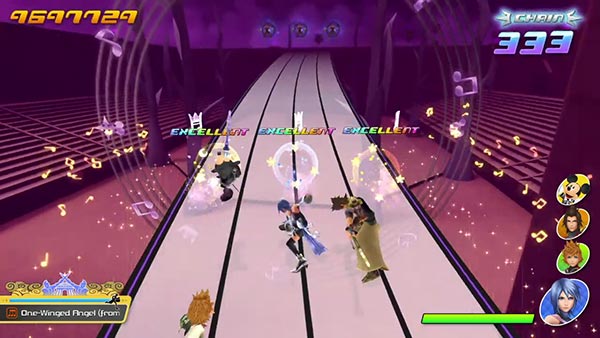 Graphics-wise, I’ve seen a lot of complaints saying that Square Enix got lazy again by recycling character models from their games of origin rather than having renders more suited for the current gen. This is of course mostly referring to how the main team of Sora, Goofy, and Donald is still using their PS2 models from the first KH rather than their most recent iterations – especially since MoM is directly after KH3. But I actually feel like that is the point of this art direction. The point of the game is to throwback, to give players a wave of nostalgia as they go over the story they followed for almost 20 years. So it is actually nice to see the game represented as the players remember them. This also applies to every other aspect of the game – with the other playable characters, the enemies, the stage renders – they’re all relative to how they appeared in their original games so you see gradual improvement as you progress further into the game – which is quite the journey in itself. They’ve included mobile games and other spin-offs like the Theatrhythm-style chibis during the loading screens and Union χ graphics in some scenes. 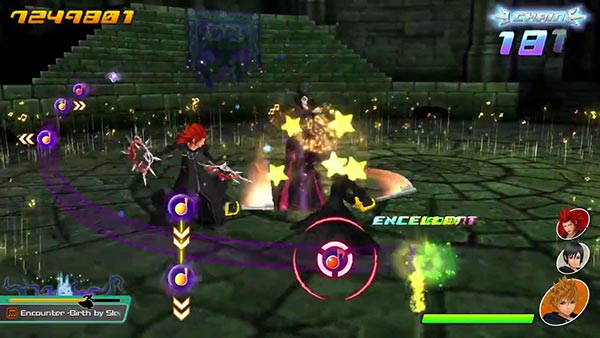 And of course, we can’t have a review of MoM without talking about its most celebrated feature – the music. Say what you want about the confusing storylines and multiple clones, one thing that most fans can agree on is that Kingdom Hearts music is in a league of its own. With its fun remixes of classic Disney tunes mixed with Square Enix’s knack for epic orchestral and ensemble music, it was fun in the previous games to fight with those music pieces as background music as it sparks a special kind of fire in you. Now you get to battle again in those same songs, but this time your battle complements the background music. Hitting notes and enemies, casting spells, and gliding to the beat really enhance the experience and makes you appreciate the songs in a new light. This would be one of the few times one would actually wish a game had DLC as MoM’s song list doesn’t cover all of the tracks the KH series ever had like the tracks from Tarzan. I also wish they included some remixes and concert versions from some of their special collections.

All in all, for a gimmicky one-of, Kingdom Hearts: Melody of Memory is a great addition to the beloved series – both as a CliffsNotes catch-up to the series + extras and a stand-alone rhythm game. Though it is fair to say that this game is mostly just intended for fans, rhythm game enthusiasts who aren’t into KH will still be able to enjoy the game and its innovations to the genre. Who knows, it might even be their gateway into being a fan of the series. I wouldn’t mind seeing this either incorporated into the next game or MoM having another installment after another bunch of entries into the series.

Kingdom Hearts: Melody of Memory (PS4)
Graphics
80
Gameplay
90
Controls
90
Replayability
90
Story
80
Reader Rating0 Votes
0
DA Good
Great digest for KH fans and non-fans to catch up on the story so far.
Innovative rhythm game reinvention that doesn't discriminate between vets and beginners.
DA Bad
The song list doesn't include all of KH's tracks. Not really a complaint.
Beyond the featured art and that one Sephiroth song, KH inexplicably is leaving FF out of these recent games.
86
Solid
Type to search or hit ESC to close
See all results