I was close to…something. And now I’ll never know.

Like all good things, this crossover must come to an end. Remembering Alderaan and its destruction, Leia risks 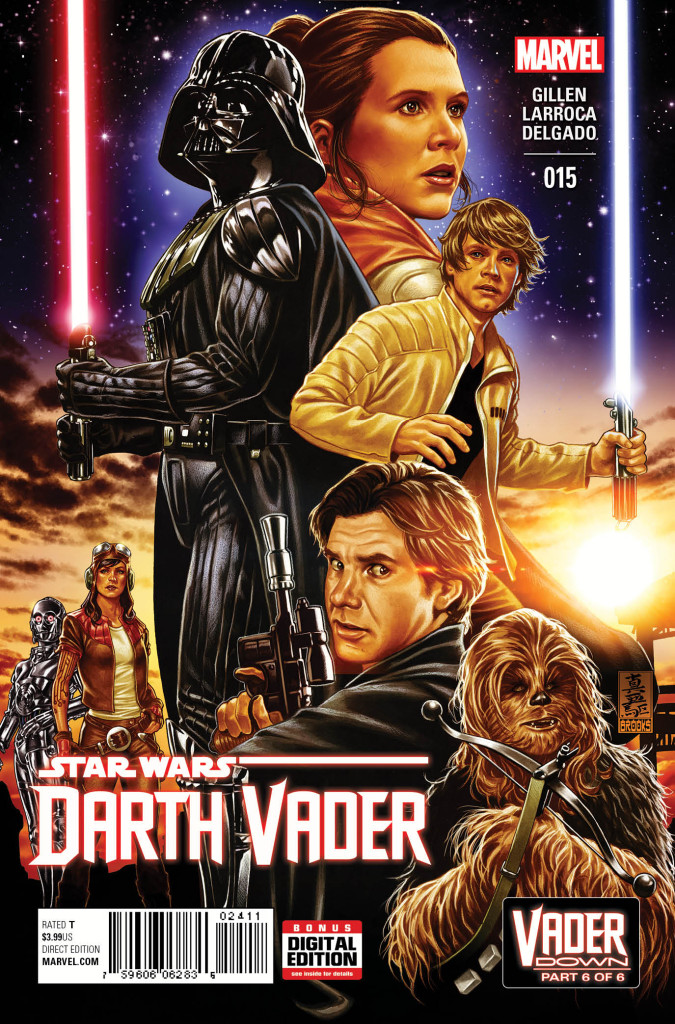 losing an opportunity to free the galaxy and instead comes to save her friends. Things come to resolution as Vader and Aphra finds a way to permanently finish off Karbin, and Krrsantan is electrocuted by trying to destroy C3PO’s wiring. Luke is ironically saved by Vader without Luke knowing, & Aphra is caught by the Rebels. This issue certainly solves all the problems and comes to a good ending, but not for everyone.

Vader’s purpose on Vrogas Vas was to meet his son, Luke, yet when he had every opportunity to do so, he was stopped. This was done either by the Rebels, or the Empire itself. The consequences of events like these that happen in between the Episodes is that, you know in the end that the main characters will live. It’s not that I expected them to die, rather, I don’t like it when I know the ending. The ending was also somewhat disappointing with the fact that it seemed rushed, forced, and implemented as fast as I can say “Noo!” Everything sorts itself out without much of a threat, and we don’t even get to have Vader confront Luke, which was what we’ve all been waiting for! The ending made me feel exactly as to how it ended; I watched it passed by as it just left me there to wonder what just happened.

Don’t get me wrong, it was a pretty strong crossover event. Compared to Marvel’s recent crossover events, this still takes the cake. However, I wasn’t given the ending I needed. Vader needed to see Luke again. Even if they just saw each other, for even just a moment, I would be fine! I understand that Luke has little to no training at all, and perhaps the reason why Vader & Luke didn’t meet was because Luke would so easily lose to Vader. I guess his real fight has to happen when he’s trained, which was in Episode V. That’s quite insightful of the writers to do that if that’s what they meant, but the ending still felt short.

Nonetheless, I’m still impressed with how Gillen & Aaron were able to write such a cohesive, thrilling, & entertain story, which had me on the edge of my seat. I honestly cannot wait for the next Star Wars crossover, and I’m crossing my fingers it would be as good as this.