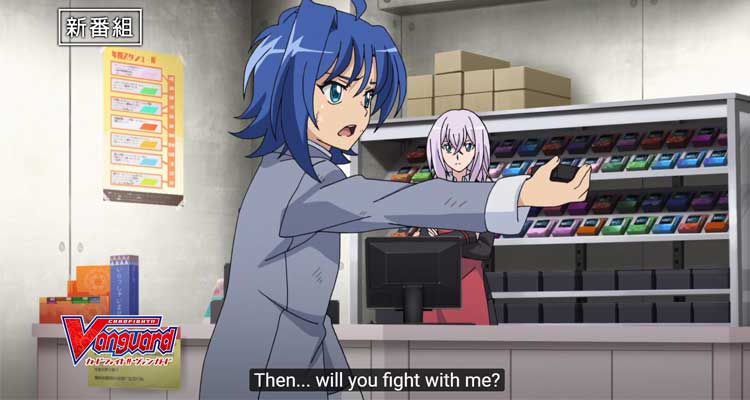 Bushiroad has recently announced that there will be a new season to the anime, Cardfight!! Vanguard. The new season starts a new story with Aichi and Kai returning as the main protagonists. The new season will also show many beloved characters such as Misaki Tokura, Kamui Katsuragi and Ren Suzugamori to name a few. The new season will also be made available on YouTube with Japanese dubbing and English subtitles on May 5, 2018, and subsequently the English dubbed version will follow.

As for the trading card game, Cardfight!! Vanguard will be introducing the Standard and Premium formats to their gameplay. In the Standard format, players will only be allowed to use cards from the new season onwards, making it enjoyable for both new and experienced players, while in the Premium format, players can use any of the cards ever printed, which caters to experienced players looking for more variety in strategy and card selection. Both formats will be given equal support and have tournaments dedicated to them at the Bushiroad Championship Series 2018. In addition, two new abilities, “Front Trigger” and “Imaginary Gift” will be added to enhance the gaming experience for players.

Starting from June 2018, Bushiroad will be releasing a new line of products for Cardfight!! Vanguard. A demo caravan will also be conducted at over 300 shops across the world with all participants receiving a complimentary demo deck.

In addition, Bushiroad announced that the production of a spinoff animation based on the Bermuda Triangle clan found in the Cardfight!! Vanguard world as well as a mobile game tentatively titled Vanguard Zero are in the works for the popular franchise. More information about these projects will be revealed at a later date.

More details on the new rules and formats you can head here.