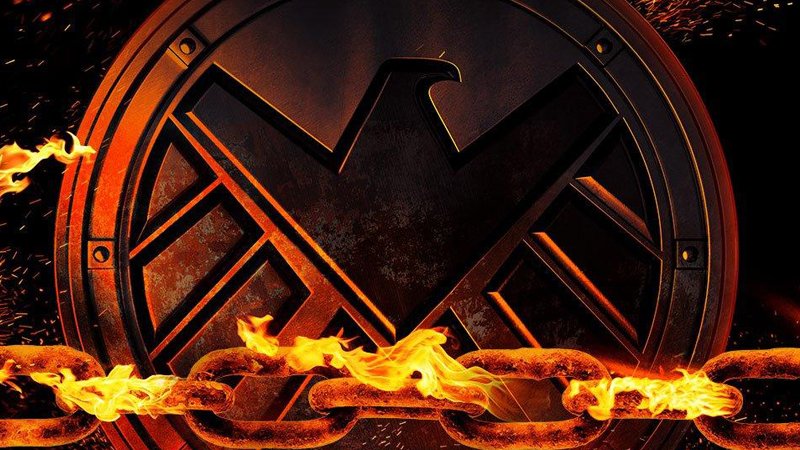 To start of my review for the recent season of Marvel’s Agents of S.H.I.E.L.D., I will be discussing scenes in the episode in this review. So if you don’t want to be spoiled, I am saying this now

Alright, good? If you’re still here then read on what happens.

The episode starts off with a car chase, showing some scenes of Skye/Daisy or Quake (Chloe Bennet) as she is fondly referred to as in the newspapers. The car chase comes to a halt with her disabling them. Here is where we get our first glimpse of Ghost Rider’s car’s transformation into the fiery one we know from the comics. He arrives and kills some of the criminals and kidnaps the driver as they are separated from Daisy by a huge wall of fire.

Next we are greeted by Mack (Henry Simmons) and his new partner Agent Coulson (Clark Gregg) playing some backgammon where they wait for their next mission, until they are called back. From the last season each member has been separated since it’s gone public again. Agent May (Ming-na Wen) apparently was the one who called in Coulson and Mack, with news of Daisy being found in L.A.. Fitz (Iain De Caestecker) and Simmons (Elizabeth Henstridge) are still working together in the Science Division, with a slight difference of Simmons being promoted now to Advisor to the director in Science and Technology.

Coulson and Mack go to L.A. to investigate the disturbance following their lead on the Cargo Truck that was recently stolen. Here we also get a look at the “bells and whistles” that Fitz has installed in the new hand of Coulson. Some of you may remember Dr. Radcliffe (John Hannah) from the previous season, well now he is more of an ally to S.H.I.E.L.D as he has found a friends in Fitz and Simmons. He has invited Fitz to his home to show him his new creation, the LMD as he has named the project from the season 3 finale. Fitz is shocked and amazed by this because of how life like it looks, though there are some programming bugs.

This is the reason Dr. Radcliffe had invited the two of them over, so that they may brainstorm and perfect his creation. Fitz is hesitant at first to help but is convinced how its purpose isn’t for attack, but to act as a person’s life model decoy to protect the lives of agents, like a “Shield”. As this is going on Simmons confronts May about the hostility she senses because of the position she has attained above them. Revealing that she worked for that position so that they may still have some control on what ever is happening.

I have been waiting for this season premiere for a while now, and with all the hype about ghost rider, and all the new circumstances the team is in, I think it has lived up to the hype. Though I must say the story is pretty slow for now, but i’m hoping it speeds up as we are introduced to all the characters involved.

I really enjoyed the dark tone the story is going through at this point, which was to be expected since the last season had been going that route. I loved the reference to the Life Model Decoy which S.H.I.E.L.D. is known for using, especially Nick Fury. The biggest thing that everyone has been waiting for is the new Ghost Rider, whose name hasn’t been mentioned in the episode so I as well will not be using that name.

The CGI is really good from what I saw, from the transformation of his car in the intro, to his changing into the Ghost Rider. In conclusion the episode is great and I think Marvel might have found it in their season 4 where other series quit right away if they don’t.