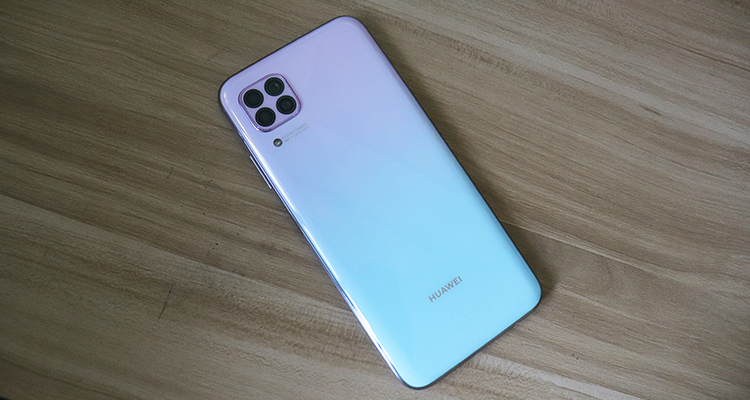 I’ve been given the chance to experience the latest addition to Huawei‘s Nova line, the Huawei Nova 7i , Sakura Pink variant.

Taking cues from the Nova 5T, the Huawei Nova 7i was designed to have the side-mounted fingerprint sensor which doubles as the phone’s power button. It also has the four curved edges design along with a really hefty unibody build that completes the phone’s premium feel. With the phone weighing at 183g, the Nova 7i weighs a little heavier than the 5T. It’s also shorter by a few inches with its height at around 6.2″ and it’s width and depth at around 3″ and 0.3″ respectively.

Colors for the Nova 7i come in three colors, Midnight Black, Sakura Pink, and Crush Green. And as you can see from below, the review unit we have is the Sakura Pink color and it really looks nice than a lot of the phones out right now. What I liked about the back plate of the Nova 7i, that unlike most phones out in the market at the moment, the Nova 7i is not a fingerprint magnet. Or at least the Sakura Pink version isn’t since the backplate is bright and colorful, you’d hardly notice any fingerprints when you’re using the phone.

Another notable design change for the Nova 7i is the quad-camera system that now is designed with a square arrangement, unlike the 5Ts where the four cameras are lined up. This is pretty interesting considering the market following this trend.

This is pretty much noticeable when I watch movies and shows on Netflix via the phone. The colors also pop-up when I was playing games like Marvel Super War and Mobile Legends: Bang Bang. I like that the Nova 7i improved on the possible cooling issues the Nova 5T had so at least it doesn’t heat up as much as it’s predecessor when the phone is being used for an extended amount of time.

The Nova 7i is packed with around 4,200 mAh battery and is reported to support the TÜV Rheinland-certified 40W Huawei SuperCharge solution. Huawei reports that it can reach up to 70% battery life in just 30 minutes and I have tested this to be true. The phone can easily get to 100% in an hour using the charging cable and adapter the phone comes with.

Using the Nova 7i as a media device I am pretty satisfied with the way the display just provides sharp images when I’m watching shows on Netflix. There’s a bit of color washout though so when I’m watching anime and reading books through the phone.

Audio is crisp and loud for the phone but lacks the bass oomph. Also, the audio breaks a bit when you max out the volume while watching so that is a minor concern if you like to play music at max volume.

Unlike the Nova 5T, the Nova 7i doesn’t heat up as much during prolonged use, and the beefy battery allows for really prolonged use. The phone is equipped with a Kirin 810 chipset and has 8GB RAM and 128GB storage so the phone is thoroughly well equipped to handle the latest games. I’ve been able to play mobile games, Marvel Super War, PUBG Mobile, and even Black Desert Online Mobile.

The Nova 7i was hit by the US ban so the phone doesn’t have Google Mobile Services installed. You will have to solely rely on the built-in Huawei Mobile Services so not all the apps you’ve been extensively using that rely on the GMS will be inaccessible out of the box. You have to install the GMS manually or you’re going to rely on another third party APK service to install some of your already mostly used apps like APK Pure.

You get quad cameras with the Nova 7i with the four rear cameras supporting 48MP high-resolution as the main camera, 2MP Bokeh lens, 2MP Macro Lens, and an 8MP ultra-wide-angle lens. The Nova 7i was designed to support Huawei‘s latest multi-frame composition technology. And the phone also has the Super Night Mode which Huawei claims to snap great night photos on the go, without the use of a tripod.

I’m pretty satisfied with the shot quality the Nova 7i brings in to the table and I can pretty much use the phone’s already built-in features to provide quality shots even if I have to just instantly whip it to take quick photos.

If you can get past the lack of a microSD card slot for those who already have been using them in your previous phone and the lack Google Services, The Huawei Nova 7i is a must grab if you want to have the complete Huawei ecosystem experience. For the price tag of ₱13,990 you will not only have reliable mid-range phone as your partner, but also a phone that won’t let you down as a gaming and camera device.