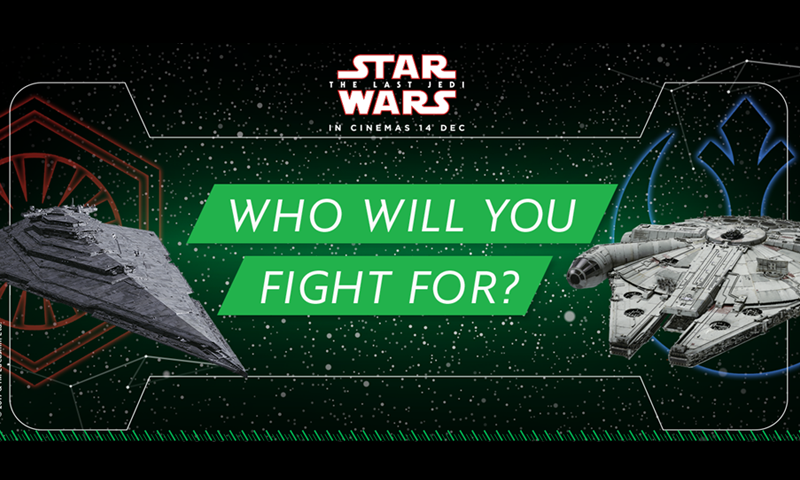 Grab the ride sharing app has announced that it’s collaborated with Walt Disney SEA to bring the Star Wars: The Last Jedi experience to those using the app in across Singapore, Malaysia, Thailand, Vietnam, and of course the Philippines.

The collaboration allows people to choose the side they are supporting. Either you decide to fight for the Resistance, or the First Order. Upon choosing, your app will get the “re-skin” of the side you’ve chosen. Instead of car icons,  you get A-wings for resistance, and Tie fighters for First Order for five weeks.

Grab is also giving away Star Wars themed items as part of the rewards such as Star Wars themed notebooks (Storm trooper Notebook) , passport covers (BB-8 Passport Cover), Tote Bags (BB-8 Tote Bag), and a Feel the Force Tumbler. You can even win a private movie screening of The Last Jedi. Of course the grand prize for the contest is a trip for 2 to the world’s largest privately-owned Star Wars memorabilia museum, Rancho Obi-Wan in San Francisco, California USA.

The Collaboration will bring in challenges for both sides where each winning will get a chance to win items such as:

There will also be an on-site Star Wars themed activity day (that will be announced on a later date) where members of both sides can participate on themed challenges.

I know that the announcement seems a bit late (this was sitting in my inbox for about three days now), but the campaign will continue to run until mid-December so you can still support your side within the time frame.

For more info, you can check the Grab app! (download the andriod version here, and the iOS version here)