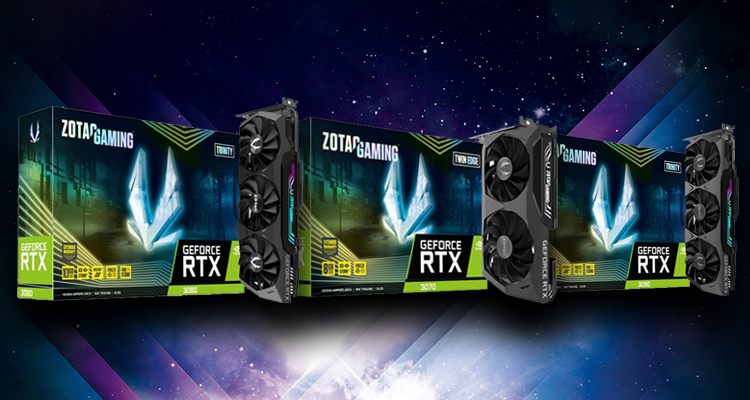 The GeForce RTX 30 Series based on the NVIDIA Ampere architecture is a marvel of engineering, we move forward introducing refinements on the component level, restraint on external hardware design, and advancements in cooling to bring out the best of each GPU.

ZOTAC introduces the all-new AMP Extreme design called the HoloBlack. It has an aurora-like holographic finish that exerts “motion in stillness”. The finish shifts in color based on the angle of the light hitting it with transparency that’s only visible when the Spectra 2.0 RGB lighting glow underneath.

The shroud unifies the back panel to the front and has ARGB lighting. A 3-pin header also enables the connection of an external RGB LED strip to sync with the GPU’s light settings.

The ZOTAC Gaming GeForce RTX 30 Series also comes in the Trinity and Twin Edge variants, the triple and dual fan models, respectively. Both of these cards come equipped with a more refined IceStorm 2.0 cooling system.

The powerful cooler is purpose-built for wider coverage for cooler temperatures and higher frames. The new 11-blade fan design increases airflow by as much as 10% compared to previous generations and the redesign of the heatsink, heat pipes make sure that your system is running at optimum thermals.

You can also take advantage of ZOTAC‘s own app, the ZOTAC Gaming FireStorm Utility to tweak your card’s performance to your liking and push it to its limits.

Trinity Models of the ZOTAC Gaming GeForce RTX 30 Series are available starting in the 2nd half of September 2020, while AMP Extreme and Twin Edge models are expected to be available in October 2020.