Within the chaotic Manila International Book Fair 2017 where book enthusiast from all over the country flock together, a small corner of the convention served as geek sanctuary for people who are tired of tackling through the huge crowd of bookworms. A place within a bustling event where everything is all about fandoms.

The FandomFest at MIBF 2017 was located at the second floor activity area of SMX. It was a mini fun-filled event within the massive book sale. As the Manila International Book Fair started from September 13 to 17, the FandomFest was a two day event that started on September 16 and ended at the last day, September 17. Though the whole event had a limited capacity and was rather small, it was filled with activities for fandom-loving geeks.

During the first day, the first ones who took up the floor were the Star Wars fandoms the 501st Legion Philippine Garrison, the Rebel Legion, and FightSaber. Fans took pictures of Storm Trooper and Jedi cosplayers and also witnessed a real lightsaber training session. A photo op with Superman, Batman and Owlman cosplayers were provided by the DC Comics fandom Justice PH. The Game of Thrones fandom Westeros PH also held a quiz game for all the Game of Thrones/A Song of Ice and Fire fans. The day ended with a Pinoy Cosplay competition and another lightsaber training session by FightSaber. 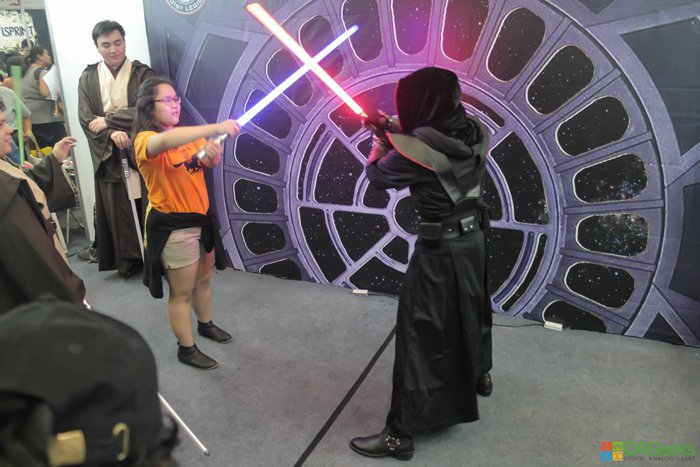 The last day started with the Lord of the Rings fandom Philippine Tolkien Society, with lessons of Elvish language, Middle Earth warfare and weapons. Harry Potter fandom Portkey Events held a Defense Against the Dark Arts Class and also a Quidditch game, which tryouts were held the day before. Graphic novelist Arnold Arre, known for his works like the Mythology Class, also held a book signing at the event. There were also Geek debates and a Western Cosplay contest. By the end of the night, the event held the Open Jamilton, where fans sang along to the marvelous songs from the musical Hamilton.

While everyone was busy buying and looking for books, the geeks of FandomFest made sure the others who are tired of walking around are having fun.