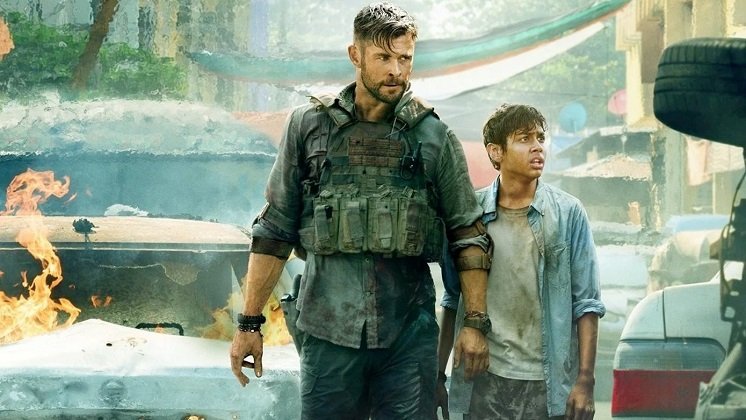 Under the rules of the National Capital Region’s enhanced community quarantine, silver screen movie releases are a rarity because the movie industry has halted its operations to prioritize health and safety, among other things. Good thing Netflix is to the rescue with its streaming movie releases. This time, I’m going to discuss Extraction with you.

Extraction tells the story of black market mercenary Tyler Rake (Chris Hemsworth) who gets the most dangerous assignment of his career yet: the extraction of a drug lord’s son, Ovi Mahajan (Rudhraksh Jaiswal). He does the job as planned, but things go awry and he has to stay alive as well as keep the boy alive at all costs. He is beset on both sides by the drug lord’s right-hand man, Saju (Randeep Hooda), and the rival drug lord who ordered Ovi‘s kidnapping, Amir Asif (Priyanshu Painyuli). As the chase happens in the busy and crowded city of Dhaka, Bangladesh, Nik (Golshifteh Farahani) remains in Tyler‘s ear to guide them to safety and to the success of the mission.

The story is lifted from the graphic novel Ciudad by Ande Parks, Joe Russo, and Anthony Russo (yes, the marvelous brothers), with Joe writing the screenplay for the Netflix movie. This is probably why the elements of the storytelling, such as the starting from the end, the very intense and satisfying action scenes, a scattering of heart-wrenching moments in between, and a cliffhanger/makes-you-think ending feel very familiar. Speaking of action scenes, perhaps the excellent execution could be attributed to the direction of Sam Hargrave, who primarily did the stunt directing in some of the Marvel Cinematic Universe movies such as Infinity War and Endgame. A particular detail in the movie which I found pleasantly surprising was the presence of David Harbour. The cast in itself have been doing a great job of roping people in, and his small role made the experience even more interesting.

(The next paragraph will be spoiler-filled, so watch out maybe.)

However, what I would like to thoroughly discuss is how the younger ones are the driving force of the movie, with the adults merely making them shine. There is Ovi, who only wants to have a father figure who doesn’t treat him like a “package in a brown bag” and found it with his retriever, Tyler, who he knew for only a span of days. There is also Farhad and the other children involved in the drug syndicate, who seek for approval and a higher place in the hierarchy at the price of their childhood.  There is also Arjun, a poor soul caught in the war amongst drug lords whose only fault was to want to belong. There is also Aarav, Saju‘s son, who will have difficulty accepting why his father did not come back in the morning as he promised.

In all honesty, Extraction could have been a nice big screen release had our lives remained as planned and on schedule. With the star-studded line-up of the cast and show runners, the movie delivered its promise of a good respite, even for a short time, from the scary pandemic-ridden outside world. Its strong point is the picture of an adult world from the perspective of children, and it gives the movie depth. And in the topic of depth, Ovi mentions a quote by renowned author Paulo Coelho, stating:

You drown not by falling in the river but by staying submerged in it.

Perhaps it is apt in the time of distress for us. Hang in there, geeks! For as long as there’s Netflix, I’ll be watching for and with you, and write about it.