Like death and taxes, seeing shounen anime in this day and age getting adapted into a 3D arena fighter is inevitable. About a month before My Hero One’s Justice 2’s release, One Punch Man: A Hero Nobody Knows arrived on the scene and landed with a sad thud, so you can imagine my reservations going into this one. Despite middling to lukewarm reviews for the first one, it was still a fun couple of hours with the characters from that universe and we could only hope for that momentum to carry forward into this one, and then some. Fortunately, they’ve managed to do that, but we feel like they haven’t quite reached the heights they’re aspiring for with this title.

Combat in One’s Justice 2 remains largely the same as its predecessor, meaning two characters, each with two sidekicks (we’ll get to that later), destructible environments, and a whole lot of stuff happening on screen. The controls make use of all face and shoulder buttons, and while that seems daunting, it won’t take long before you become acclimated to them due to the system’s simplistic nature. Special move, defensive, and movement inputs are universal, and it eventually boils down to knowing your chosen character’s toolset and leveraging it to your advantage. And thanks to the diverse cast, each with their own unique strategies and play styles, clashes here are a little more substantial than your garden-variety licensed arena fighter. 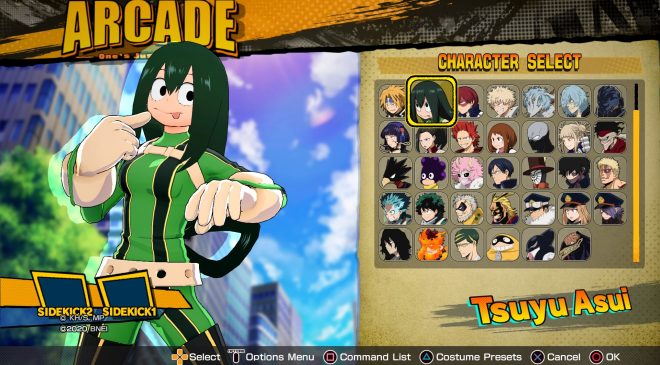 Building on its predecessor’s combat even further, One’s Justice 2 adds the Sidekick System and Team Plus Ultras. The former has you choosing two extra characters to assist you in battle in a number of ways. You can call on teammates using the trigger buttons to make up for gaps in your character’s arsenal, maintain pressure, and bust you out of combos to save you from further damage. Use your assists wisely, though, a cooldown system is in place, and getting caught in a situation where you don’t have a sidekick available is one of the worst things that can happen to you in the middle of a fight. Team Plus Ultras are your requisite all-or-nothing team super attacks that require three full stocks of meter to execute. Choose the right combination of characters based on their relationships in the source material and you’ll be treated to a  unique animation that does significantly more damage than a regular triple super. Again, know when to pull these out wisely.

With all that combined, fights in One’s Justice 2 are flashy, frantic affairs that try their best to capture the energy of the manga and anime. They mostly succeed, thanks to the abundance of effects, weighty hits, and the over-the-top animation of Plus Ultra attacks. Like in the last one, the camera that tries its best to keep both characters in frame while keeping up with all the action may be your greatest adversary at times. Mind you this game isn’t designed with a competitive crowd in mind, but for something you’d play over a weekend with friends who have a shared love of My Hero Academia, this perfectly fits the bill.

For gameplay modes, you’ve got your usual suspects carried over from the last game,  alongside a new addition in the form of Mission Mode. This one has you in charge of your own Hero Office as you build up a pool of your own heroes to build up and send on missions. Said missions are set up in board game-style grids that require a small amount of forethought and planning in order to clear. Repeatedly failing missions may even result in characters leaving your office’s roster, so your actions here do have considerable consequences. There’s fun to be had in assembling a team to take on challenges, but having to grind to level newly-acquired may dull the experience quite a bit. 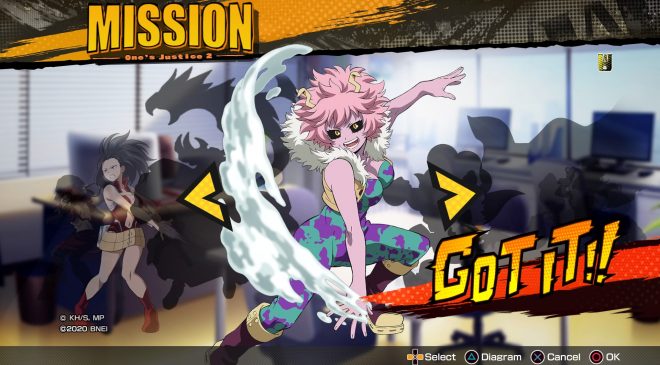 Rounding out the package are the expected Story, Free Battle, Arcade, Online, Training, and Customization modes. If you’re new to My Hero Academia, coming here for the story may be an exercise in futility as you’re really better off just watching or reading it. Do that, then come back to this to relive key moments and fights from the show’s third and fourth seasons. Playing other modes nets you Hero Coins, the in-game currency which you can then spend on a wide array customization items or recruiting new heroes for your office in Mission Mode. It’s a neat little way to incentivize spending time in different parts of the game. In fact, I managed to amass a fair amount of credits just by playing a couple hours of local versus.

For fans looking to put themselves in the shoes of their favorite characters of the My Hero Academia universe and engage in bombastic 3D arena skirmishes, One’s Justice 2 is an improvement and definitely scratches that itch.

The overall experience is lean, but it delivers where it counts in terms of filling your screen with the show’s brand of superpowered fisticuffs. And while the combat still could use more polish, we’d like to think they’re on the right track with this one, especially if they plan to make more of these down the line.