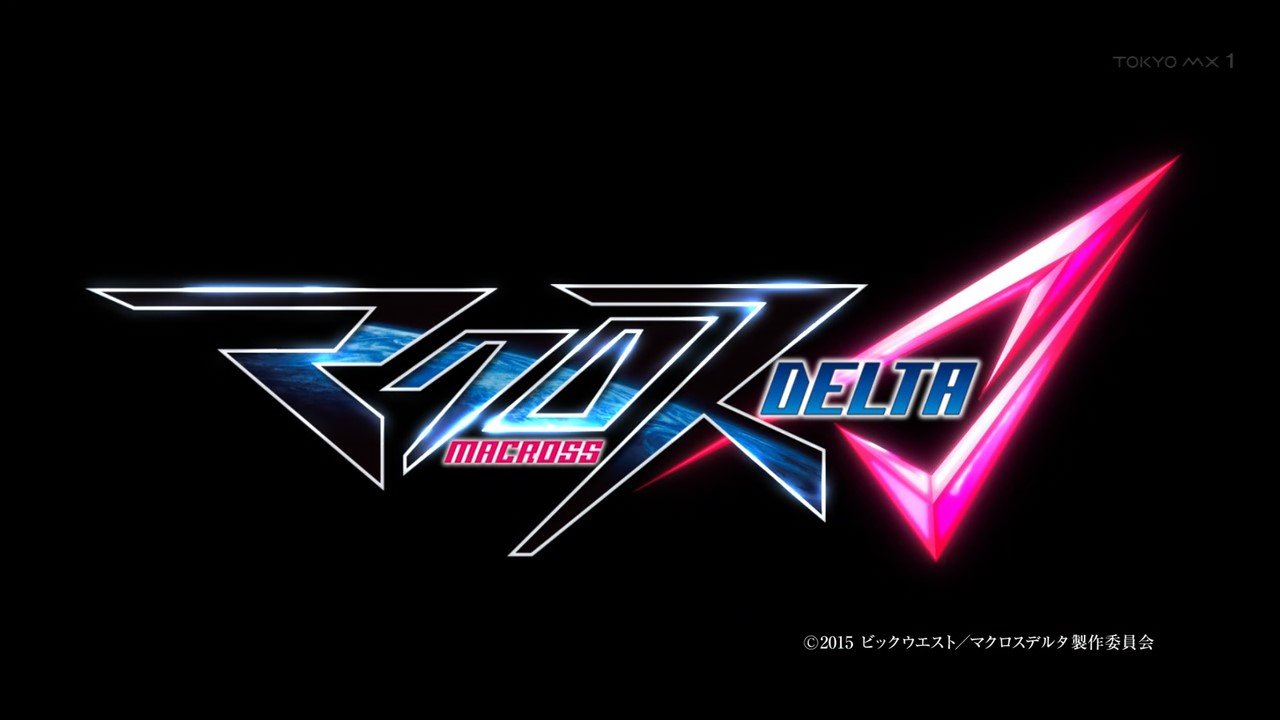 The latest addition to the Macross Franchise has arrived. And I must say that the first three episode made me fall in love with the series even with it’s all too-crazy, but kind of expected premise.

The world of Macross Delta revolves around the threat of the Var Syndrome. This syndrome is known to destabilize minds regardless of race or species and makes people into violent mobs. 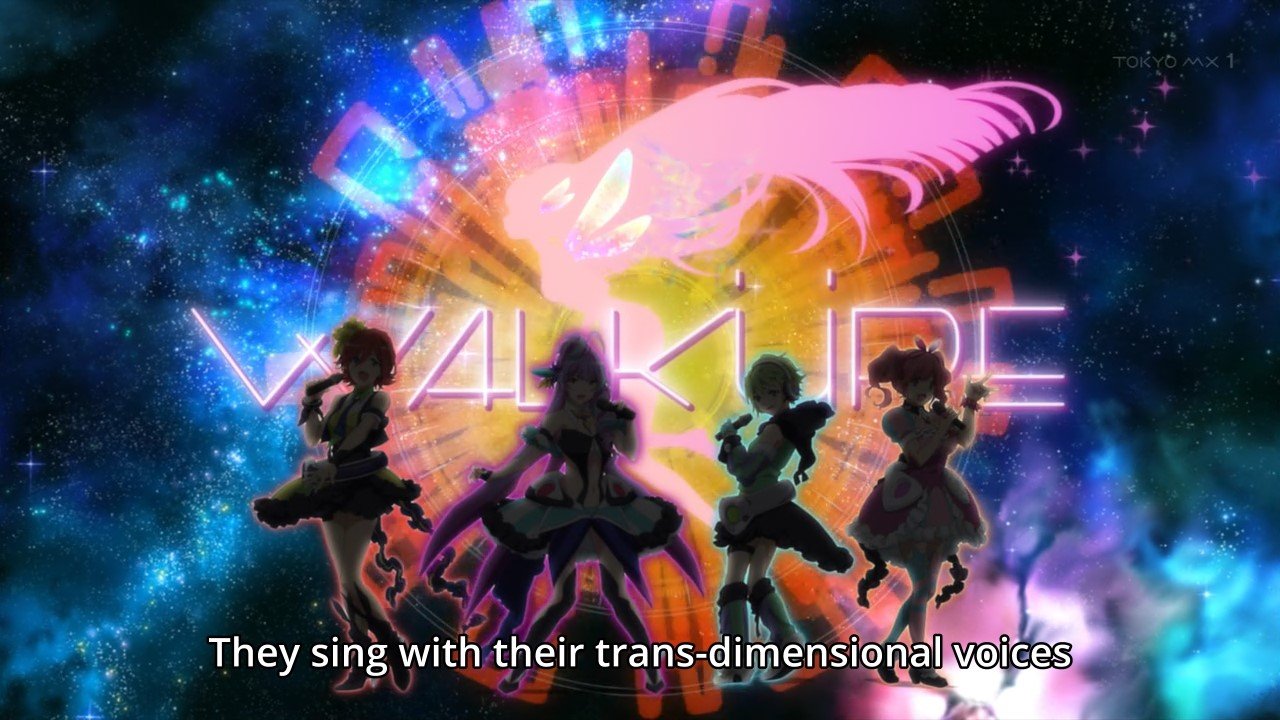 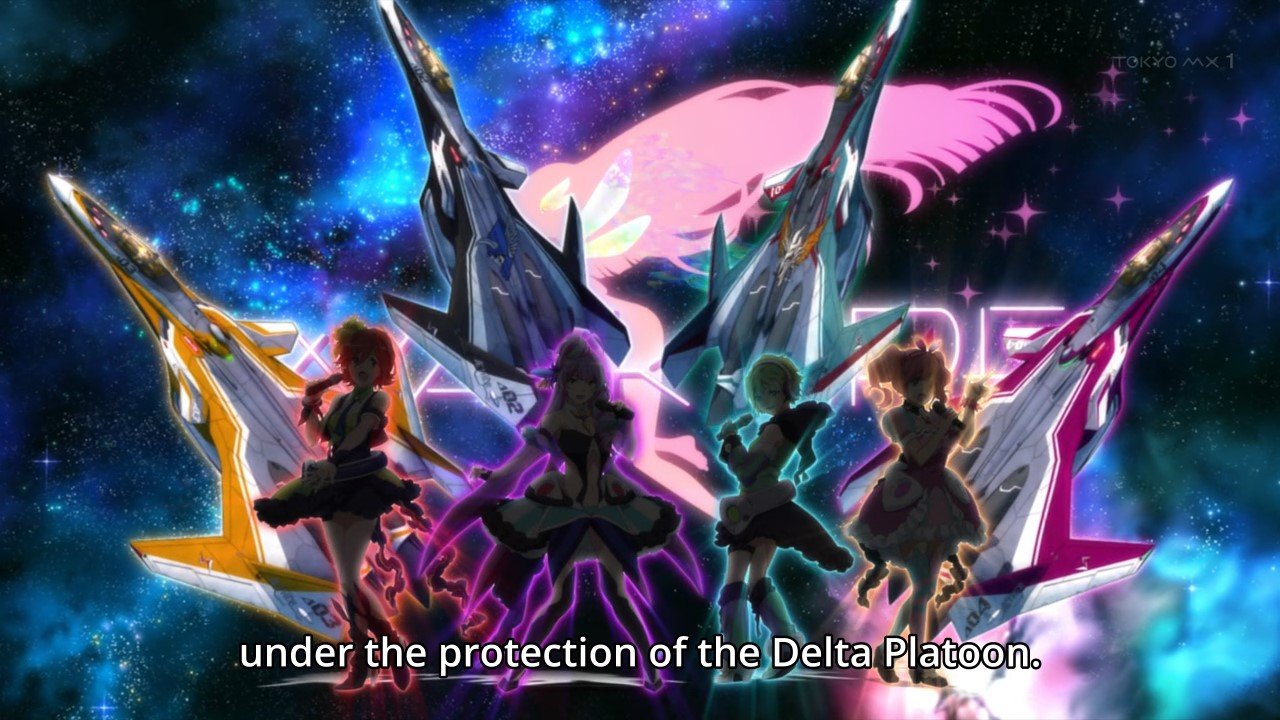 While I still personally think the premise is crazy, I liked the fact that at the get-go you won’t have to suffer through the whole discovery part where songs can affect the battlefield. Delta just went with it and just threw in the Tactical Delta Platoon just to make sure there’s enough action.

Though it seems that the Walkure are glorified galactic idols, and that having a squad of fighters would be a bit excessive. It seems that unlike the previous musical stars of the Macross franchise, the Walkure literally goes to active battle zones to perform. And unlike it’s predecessors, also get to really protect their audience as they perform.

So let me back track a bit and continue with the introduction of this series’ protagonists, Hayate Immelman and Freyja Wion. 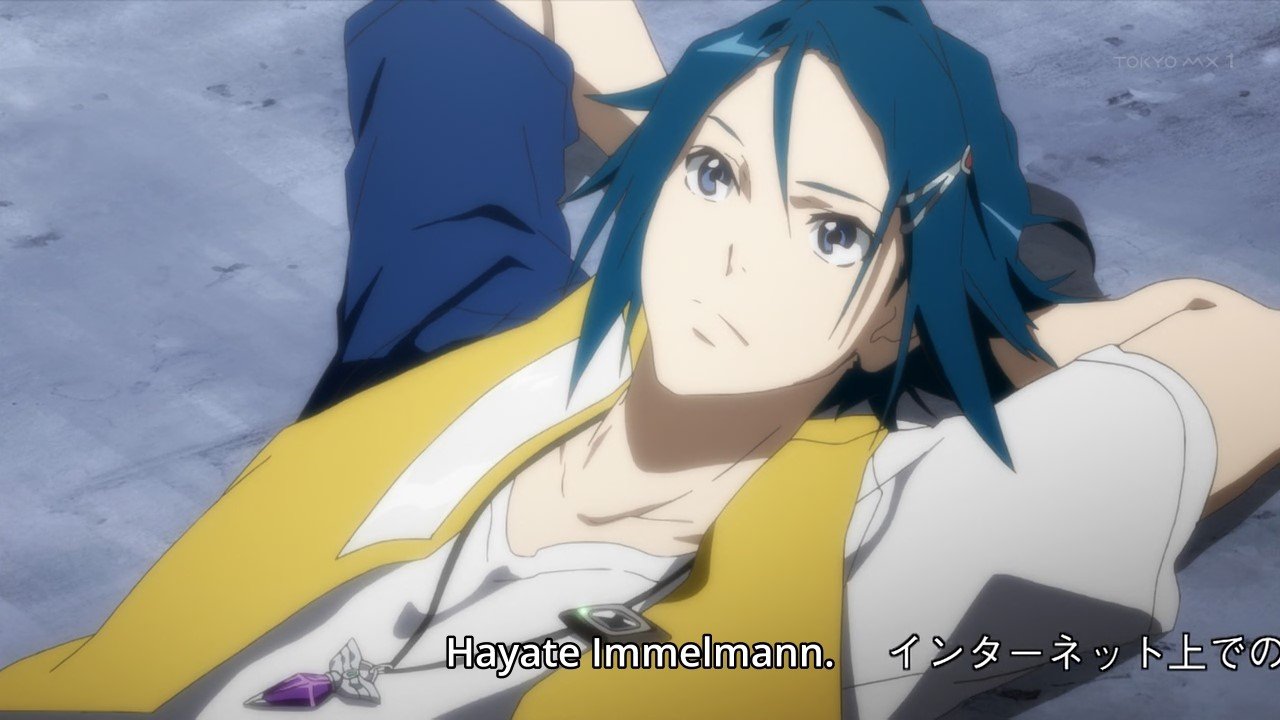 The series male protagonist seems like the usual slacker who has a penchant to keep a life that’s fast and breezy. At the start of the series we see him get fired because of his slacker ways but at the same time we get to see him in action as he controls a workroid. 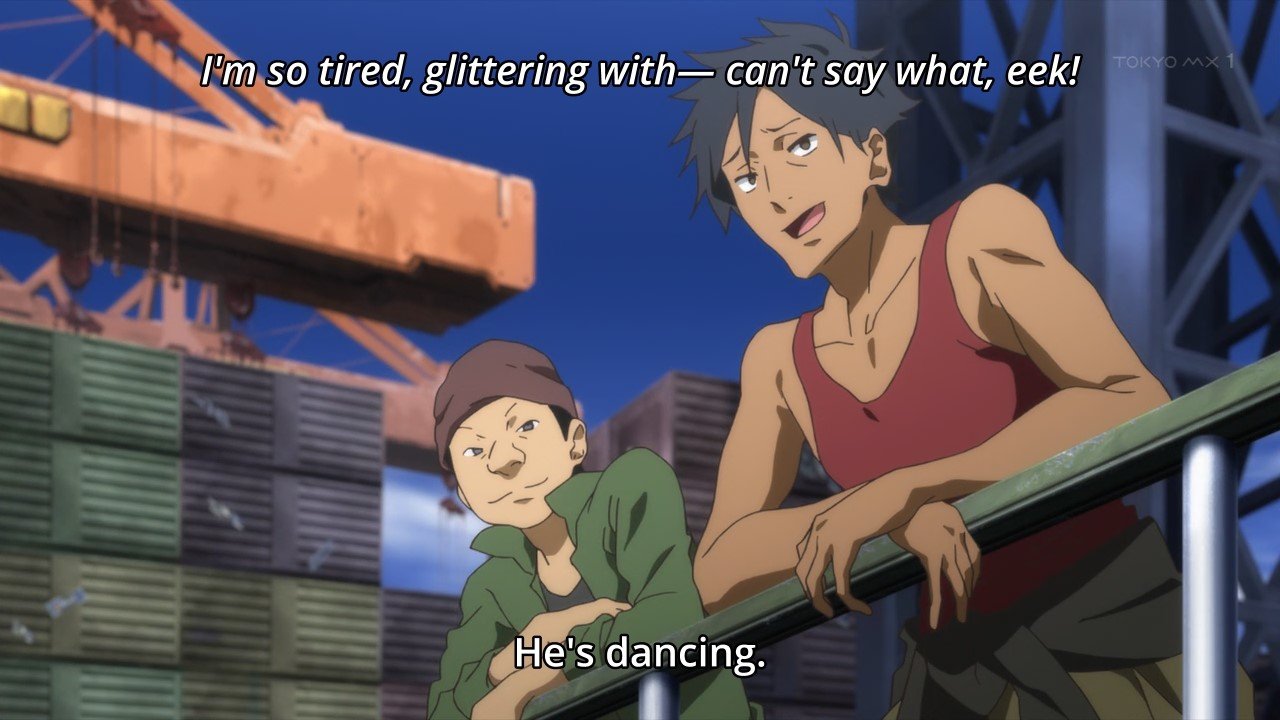 And makes it dance. 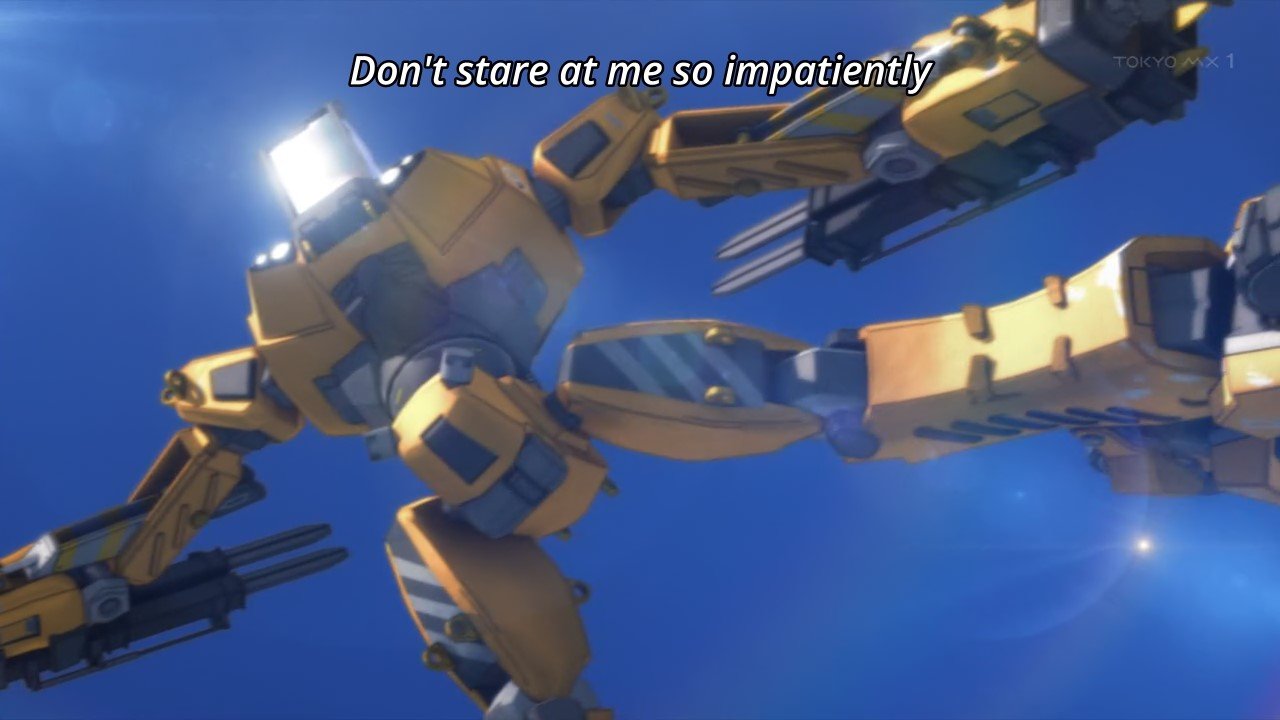 As he finishes his last day of work he eventually meets up with the other series protagonist. Freyja

Freyja Wion on the other hand is a stowaway that Hayate discovers as he stacks the cargo with his Workroid. She basically ran away from here planet Windemere in hopes of becoming part of the Walkure and to avoid getting married to an apple farm heir.

The two get to acquaint themselves with one another and after a exchanging a bit about themselves, Freyja’s been discovered and ran away. However, Hayate, decided to help out Freyja escape and eventually join together to put her in the right planet for the Walkure auditions. 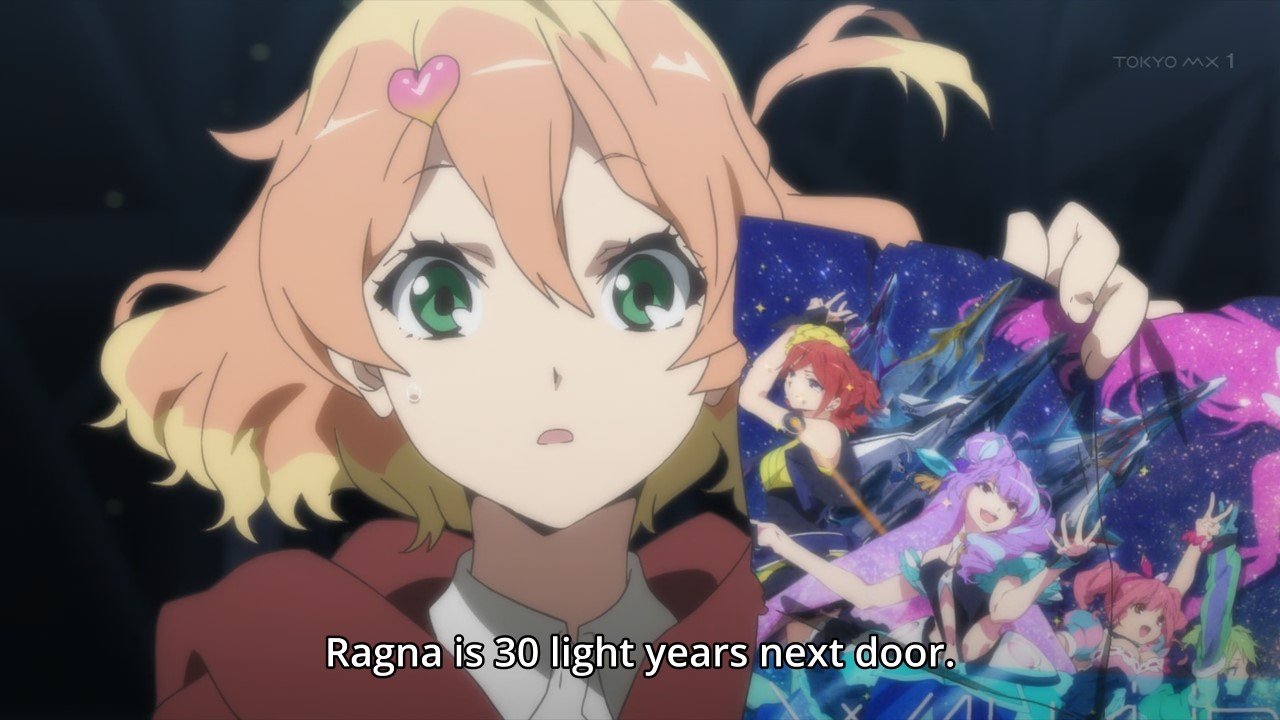 Cause you see, Frejya landed on the wrong planet, and in fact the planet where the Walkure auditions are supposed to be held is 30 light years away from Al Shahal.

Eventually and expectedly, the first episode puts the two in a very precarious situation when the Var syndrome comes out and the Walkure spring to action. Since the affected people are the Zentraedi the dangers rise up a notch or two.

We see Freyja step up and take part in the singing combat operation as Hayate is forced to save and protect her with a destroyed Workroid. 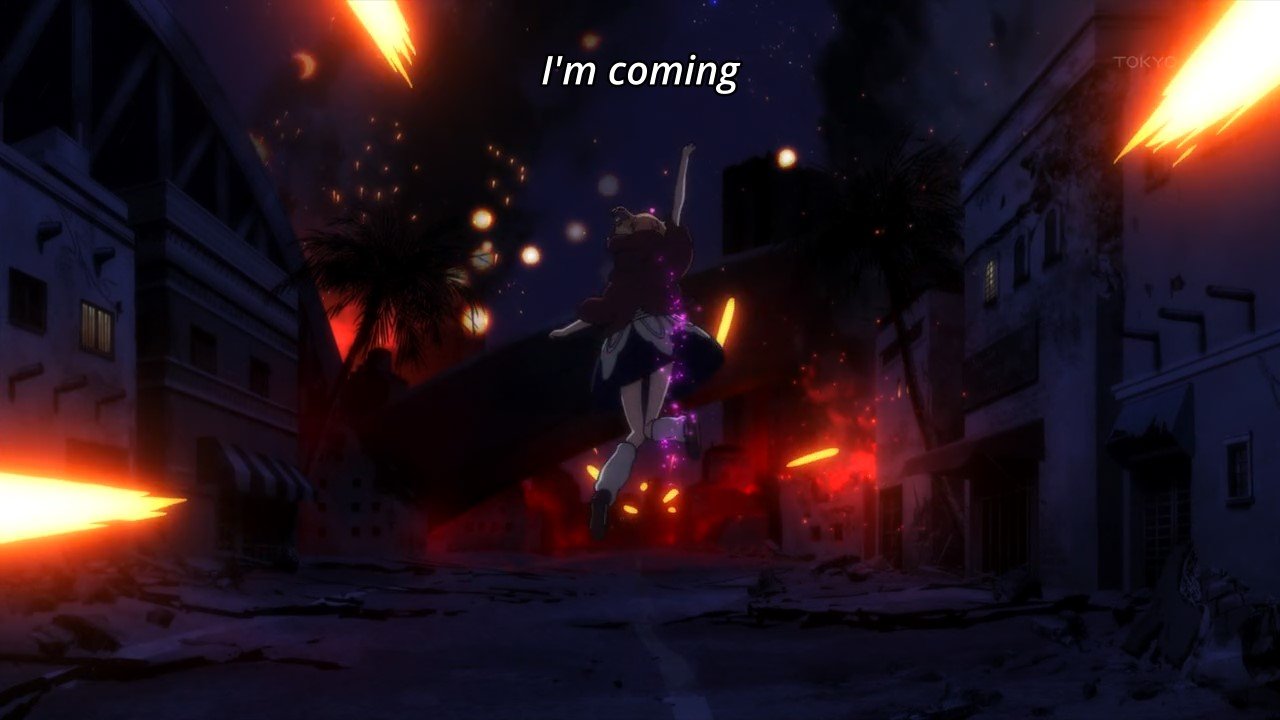 It was in this incident that both of them got the eyes of Walkure and even the Delta Platoon as they both showed promise in their own right.

Skilled and the pretty boy enemies

So aside from the Var Syndrome. The Walkure and the Delta Platoon face off against an unknown group of fighters. These fighters seem to have something against the Walkure. 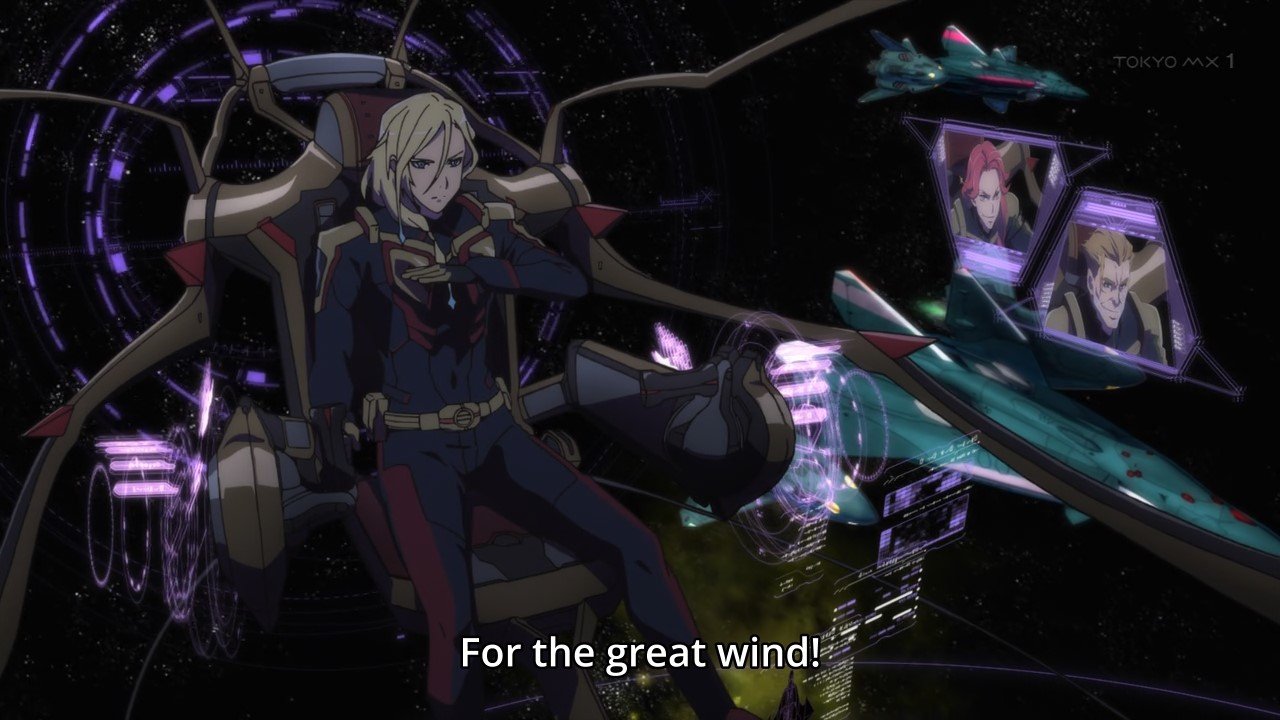 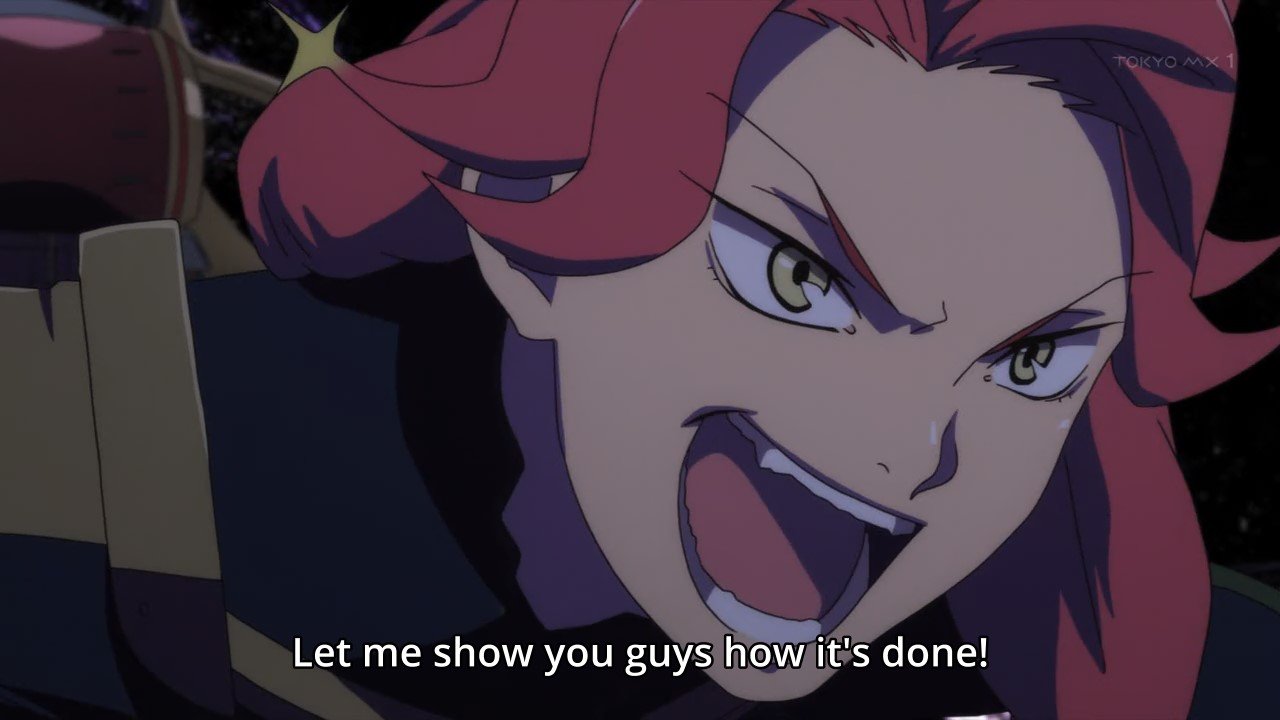 In the first episode they attack the Walkure performance that was focused on suppressing the Var Syndrome that suddenly popped up in Al Shahal.

The Aerial Knights face off against the Delta Platoon in a really exciting aerial battle in epsiode 1. 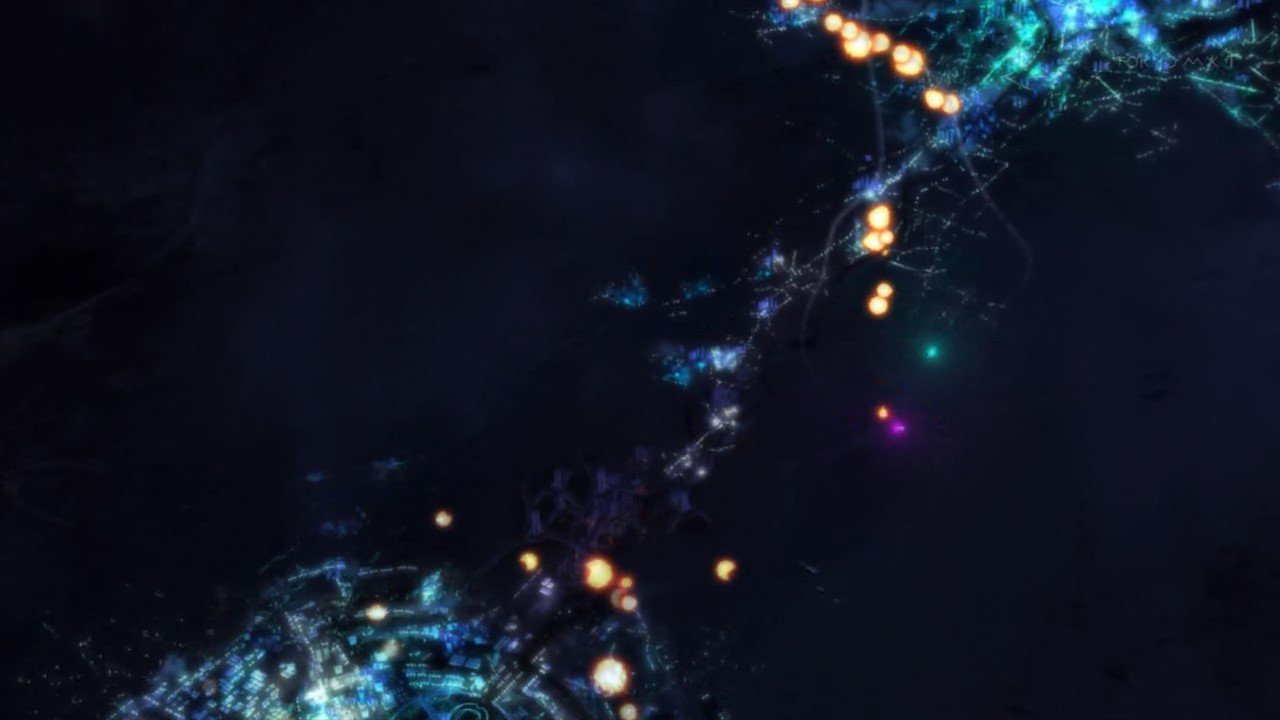 The encounter ends in a stalemate and Freyja when she sang along the Walkure is now in the sights of Mikumo, the Mysterious Venus of Walkure who also recognized her skill and potential. Episode 1 ends with Freyja getting encouraged by the Walkure for the upcoming final auditions in Ragna come Episode 2.

As the series moves unto episode 2 and 3 you get to see a breather and an introduction to the world of the Walkure and the Delta Platoon outside of battles.

Freyja and Hayate land in Ragna at the start of episode 2. Freyja in her another derp attempt to get in the audition was given a special pass to join the finals. Hayate, on the other hand is scouted by the Delta Platoon Captain and was invited to join the Platoon as he was seen during the Al Shahal conflict to be a capable battroid pilot and his penchant to dance during these tense moments.

It is in this instance that we also get to see the other highly promoted character (based on the intro), Mirage Fallyna. An uptight and strictly no nonsense pilot from the Jenius family. 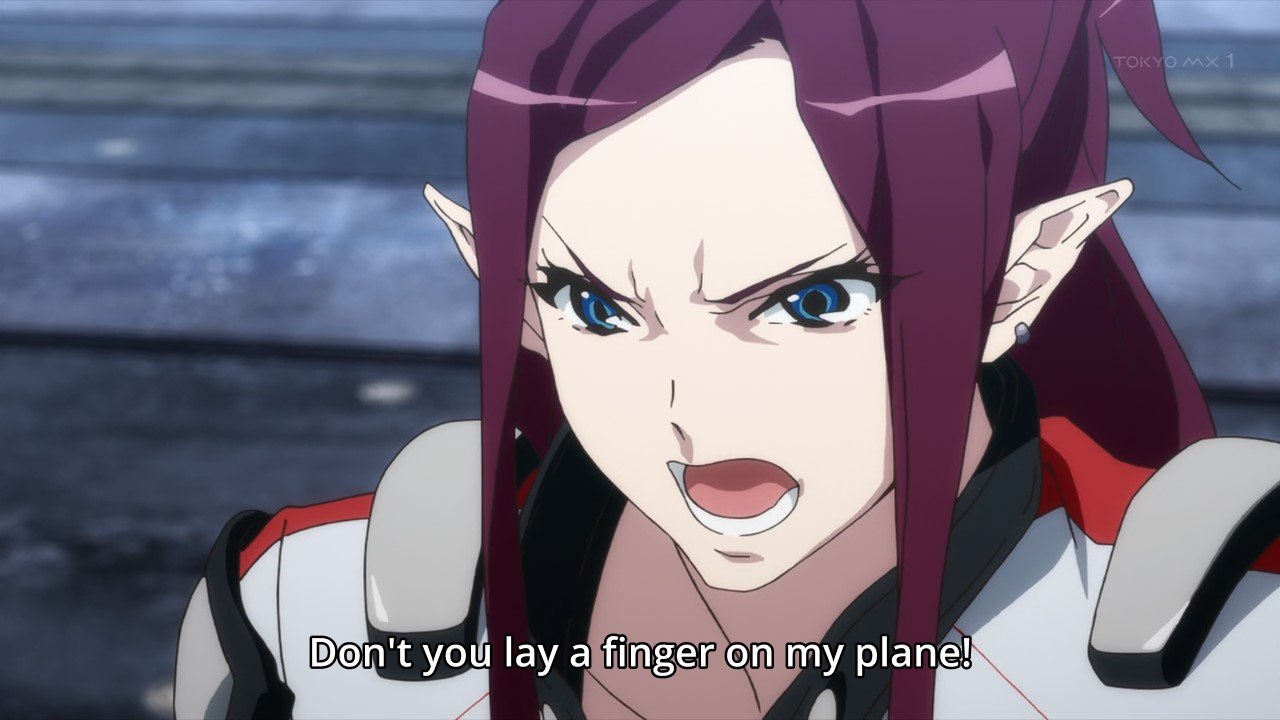 For those coming in new to the Macross Franchise, the Jenius Family dates back to the first Macross series where the family head, Maximillian Jenius, was the UN Spacy’s ace pilots and is in fact one of the pivotal characters in Macross 7. Mirage on the other hand is Jenius’ granddaughter based at least on his wiki page.

So moving on to the third episode of the series. We get to see the two struggling in their own respective areas. Freyja seems to be unable to keep up with the rigorous training for Walkure and Hayate is back to his slacker ways. At this point we get to see the reliance of both characters to one another as Hayate is facing against Mirage who he needs to hit only once just so he can stay in the platoon. We see Freyja still not able to meet up the expectations the group has for her.

During the test we see Hayate really struggling against Mirage and is nearly defeated. Mikumo goads Freyja who was attempting to leave the practice to head and watch the Hayate-Mirage fight by asking where is her battlefield? This is where we get to see Freyja realizing her situation and starts to sing her heart out, to the joy of the rest of the Walkure. Hayate on the other hand is able to pull of whatever he needs to pull off as he hears Freyja’s singing (this also happened in episode 1 btw). He beats Mirage and is able to stay in the Platoon. 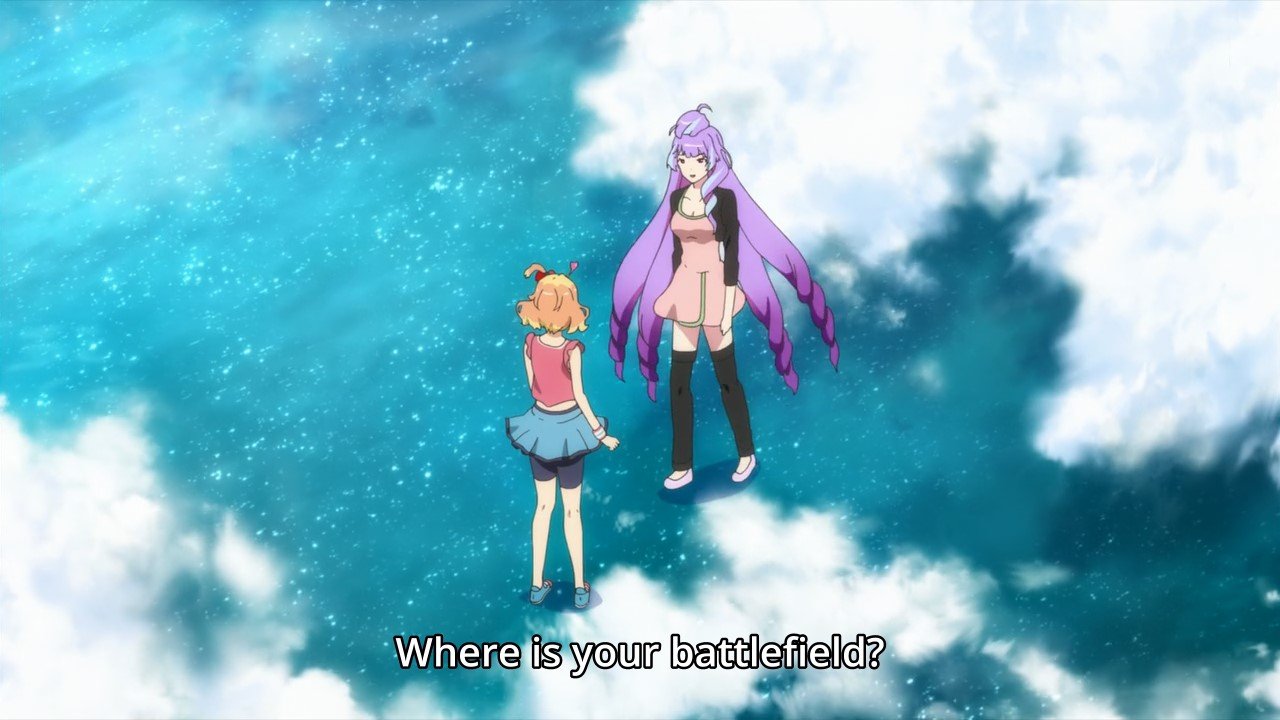 At the end of episode 3 we get to see Hayate having a change of heart and has decided to attend Mirage’s classes. He realizes his shortcomings and is now deadset in knowing more, while still maintaining the fact that the “shooting business” isn’t his thing.

As I started watching the first episode I thought that the series is really really out of this world. The series kind of really veered to what Macross 7 did and really went all in for the music affecting the battlefield. I must say though that the two protagonists, specially Hayate is more likable than the bratty and irritating Alto Saotome from Macross Frontier.

The chemistry between Hayate and Freyja feels so natural that even with the really unbelievable and pretty obvious circumstances that the creators are building the two up as the couple for the series (episode 2 and most especially episode 3 shows the reliance of both characters to one another to push themselves up).

While there’s a lot of things I can say about the holes in the plot, the obvious hints to future stories and all that. Macross Delta is an enjoyable romp in the world of Macross. I can ignore or at least go past the incredulity I felt at the beginning of episode 1 because I really just liked watching Hayate and Freyja interact.

I also liked that the Var Syndrome isn’t the main conflict in the series and the mysterious aerial knights would be the game’s main bad guy. This adds a bit more friction in the story and we get to see really awesome and skillful dogfights along the way.

Thankfully I am so far enjoying the episodes totally unlike the Frontier. Seriously, the only time I really went in, enjoyed Frontier was when I played the final boss battle in MGS Peacewalker. Yeah. That happened.

So I am looking forward to future episodes for this one!