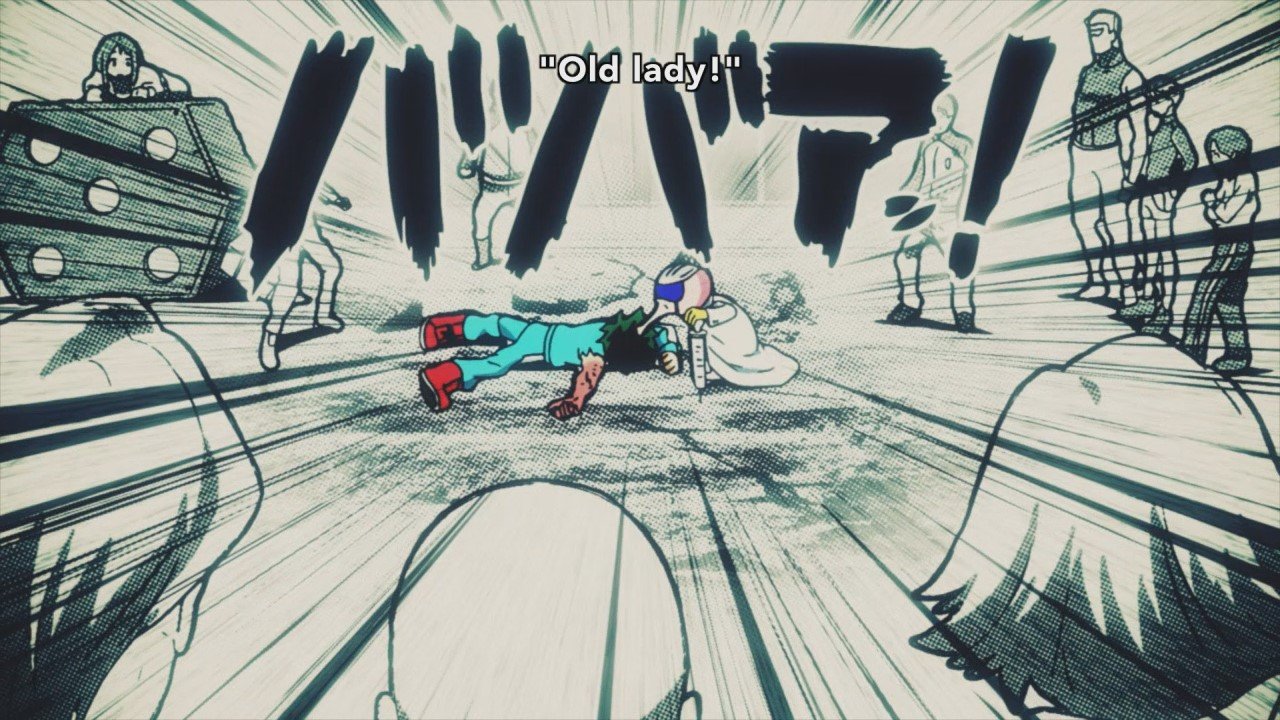 In the fourth episode of Boku No Hero Academia we get to see Izuku trying hard to keep up with the rest of the candidates in a practical battle for points. Since his wimpy attitude was a giveaway during the briefing (back in episode 3) the other candidates easily writes him off. 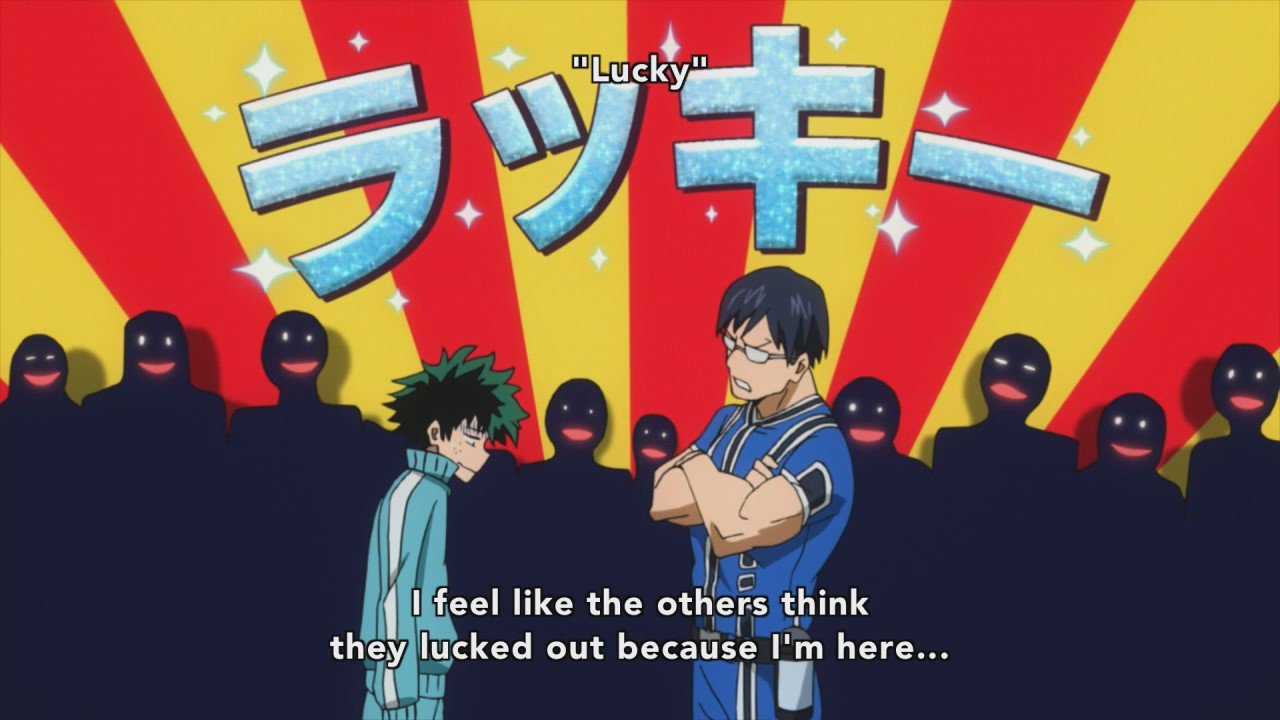 To make matters worse, he doesn’t even have control yet of his abilities that he has inherited from All Might. He even got a warning from the hero that even while he has become a proper vessel for All for One, it was a vessel that was made in a hurry. And as such he was warned to be prepared for the physical repercussions of the quirk to his body. 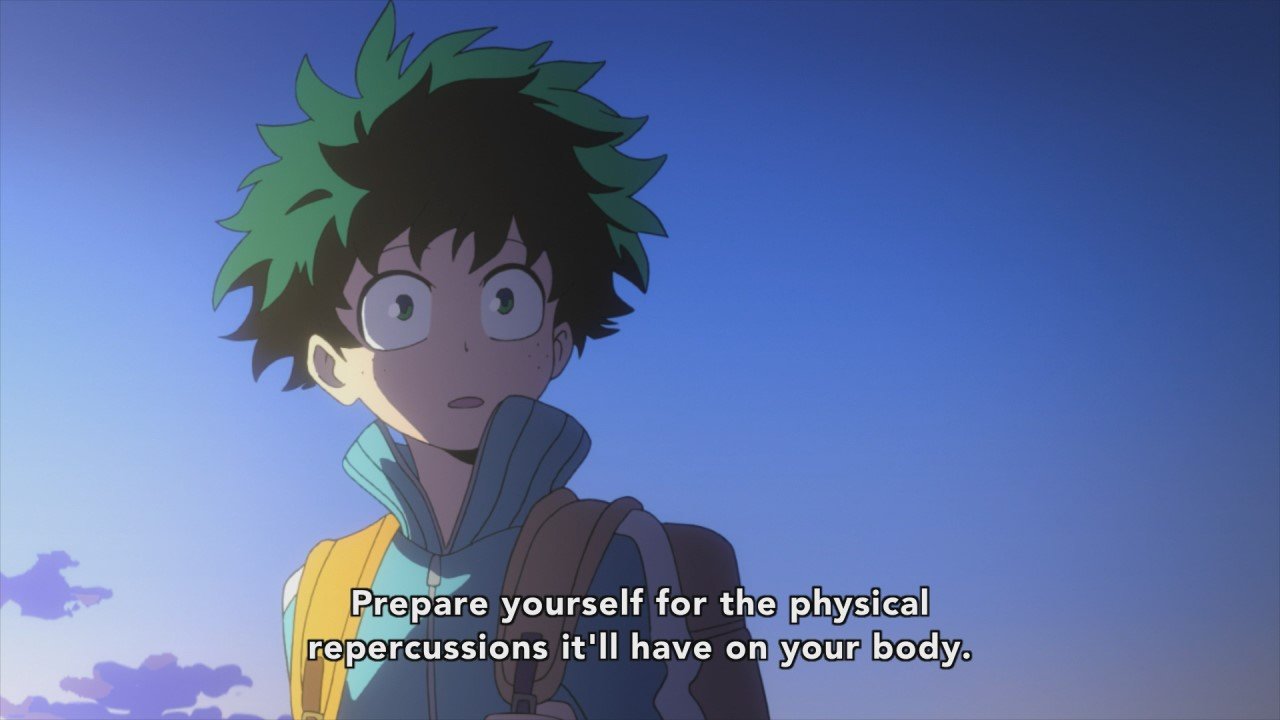 As expected, Izuku’s trying hard to keep up with the others however: 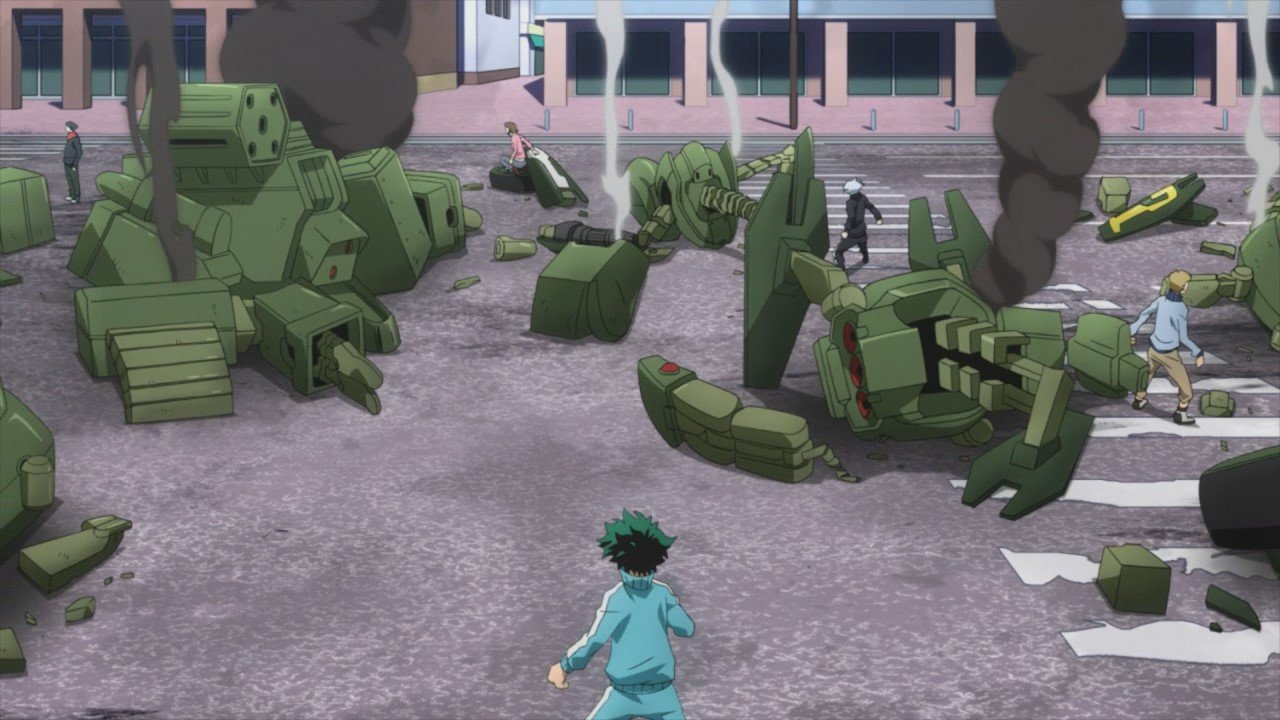 Even the “nice girl” he met at the entrance was racking up the points. 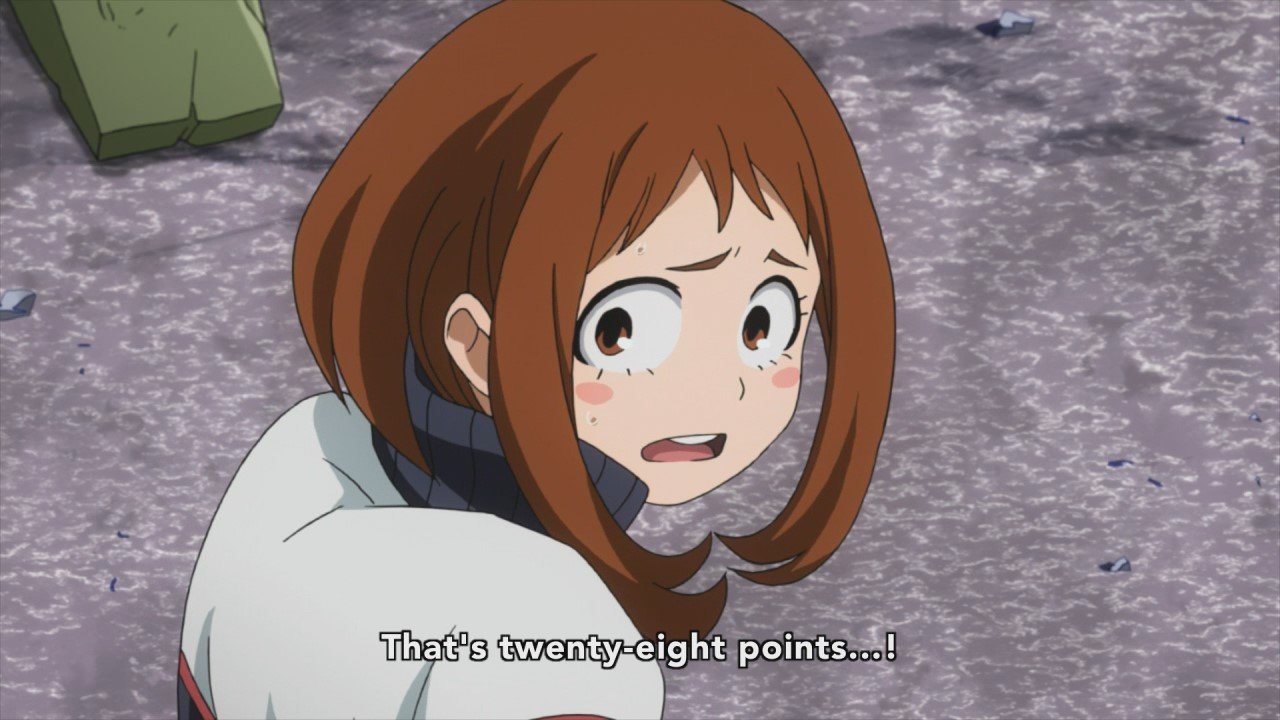 Of course our hero is at his wit’s end with everyone getting points but then suddenly we get introduced to the 0 score robot: 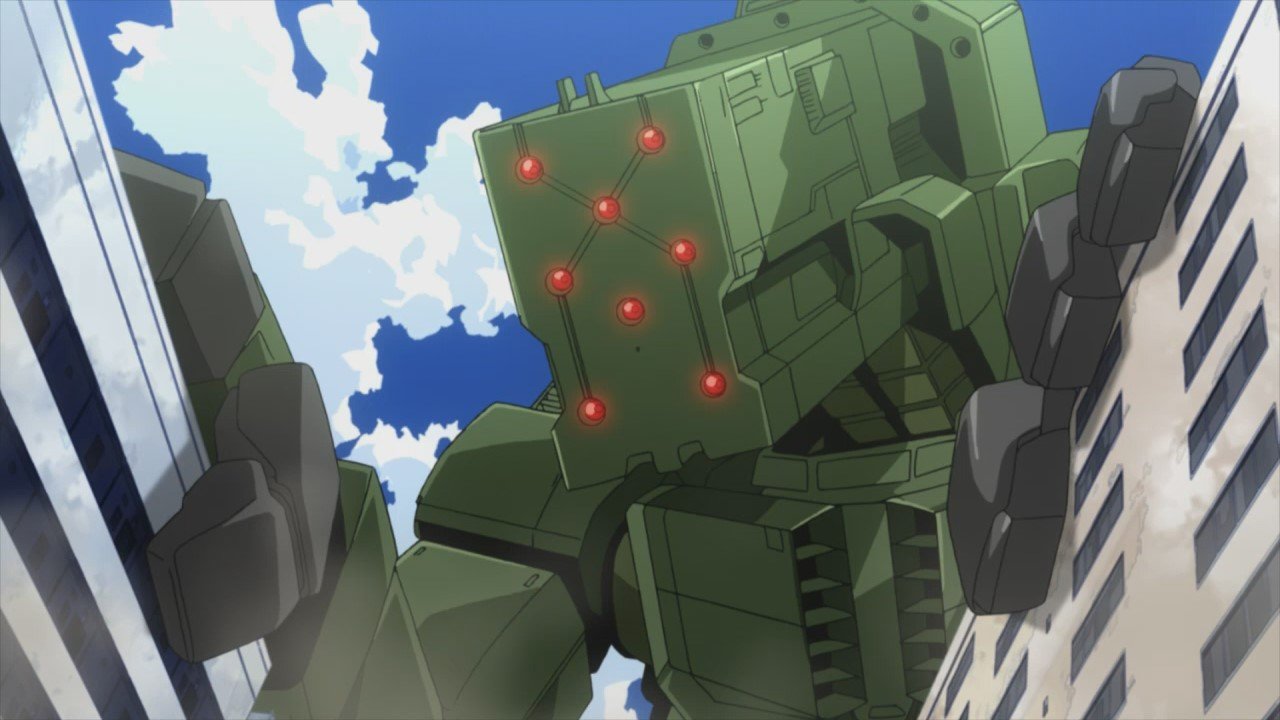 who freakingly looks like a godzilla in mech form.

So everyone who has half a mind runs away from the monstrosity. 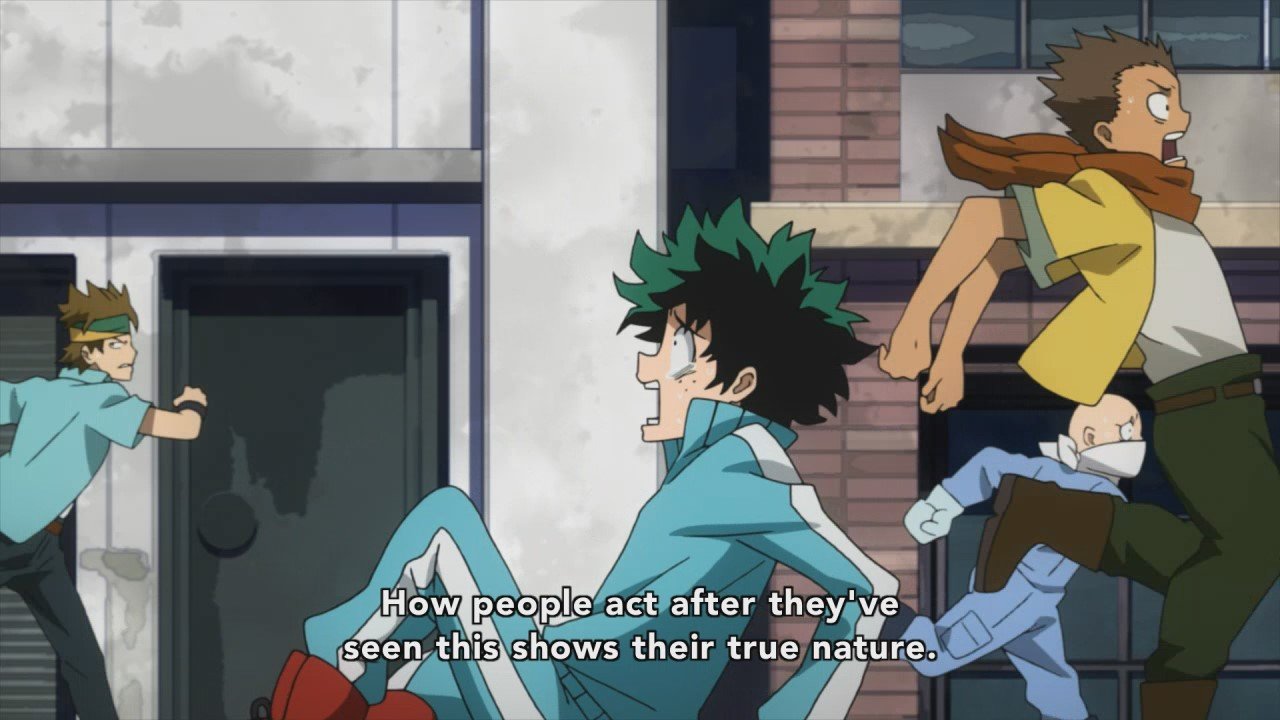 Everyone, even the strict no-nonsense guy who told Izuku off during the previous episode had to run away. Even our fear rooted Izuku had half a mind to keep on running. However: 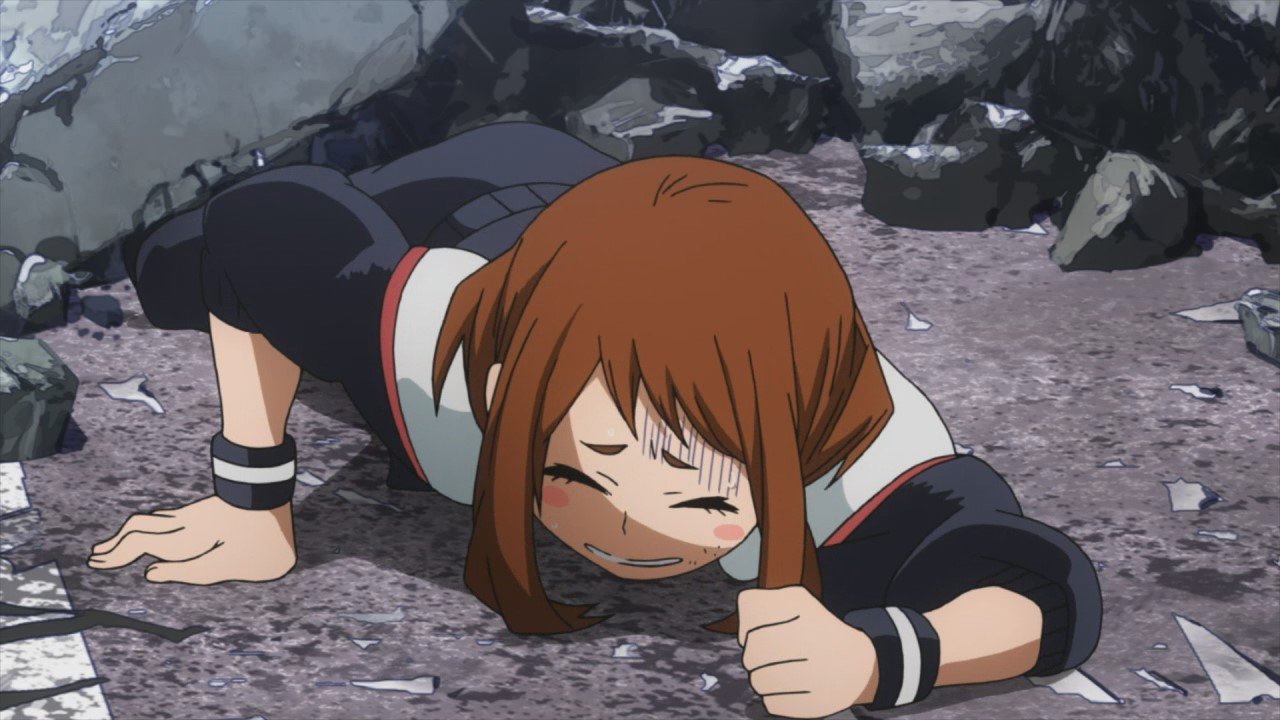 So instead of running, we get to see Izuku run towards danger because he sees someone in there that needs saving. He runs blindly into the dust created by the 0 point robot and like what he did when his friend was in danger of the ooze villain, he faces the 0 point robot head on.

So he was able to save the nice person (Ochaco Uraraka) because of that but at the expense of his arm and legs with were broken with the impact of his punch. Still that looked really good, and it helped that All Might approves of what Izuku did. 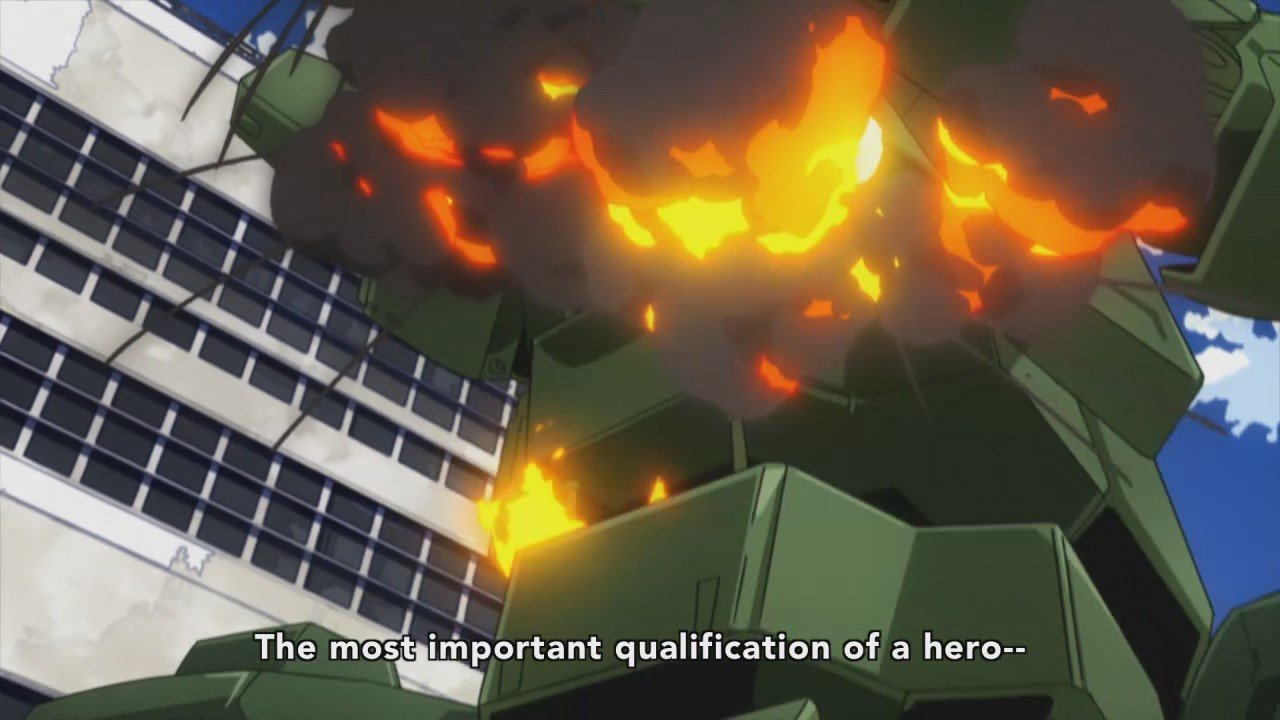 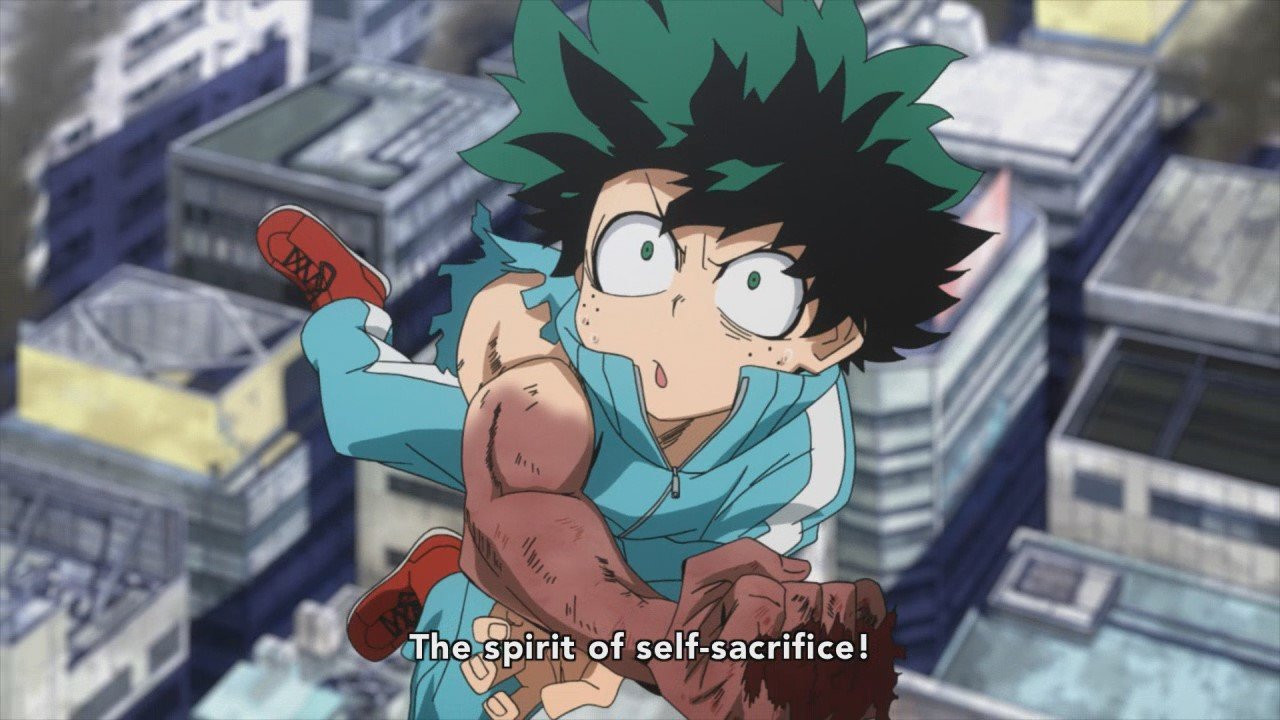 Of course this selfless action had his peers finally respect him at least. He was able to recover properly as the UA High’s licensed nurse, Recovery Girl was able to bring him back to his old form prior to him being ruined by the sheer power of All for One.

A week after the test, we see Izuku sulking at home, talking to himself about how he is trying to justify his actions by saving the nice person from harm. With him still going through his training he was able to get his letter from U.A. High And of course, it doesn’t really take a rocket scientist to know the result Izuku had. 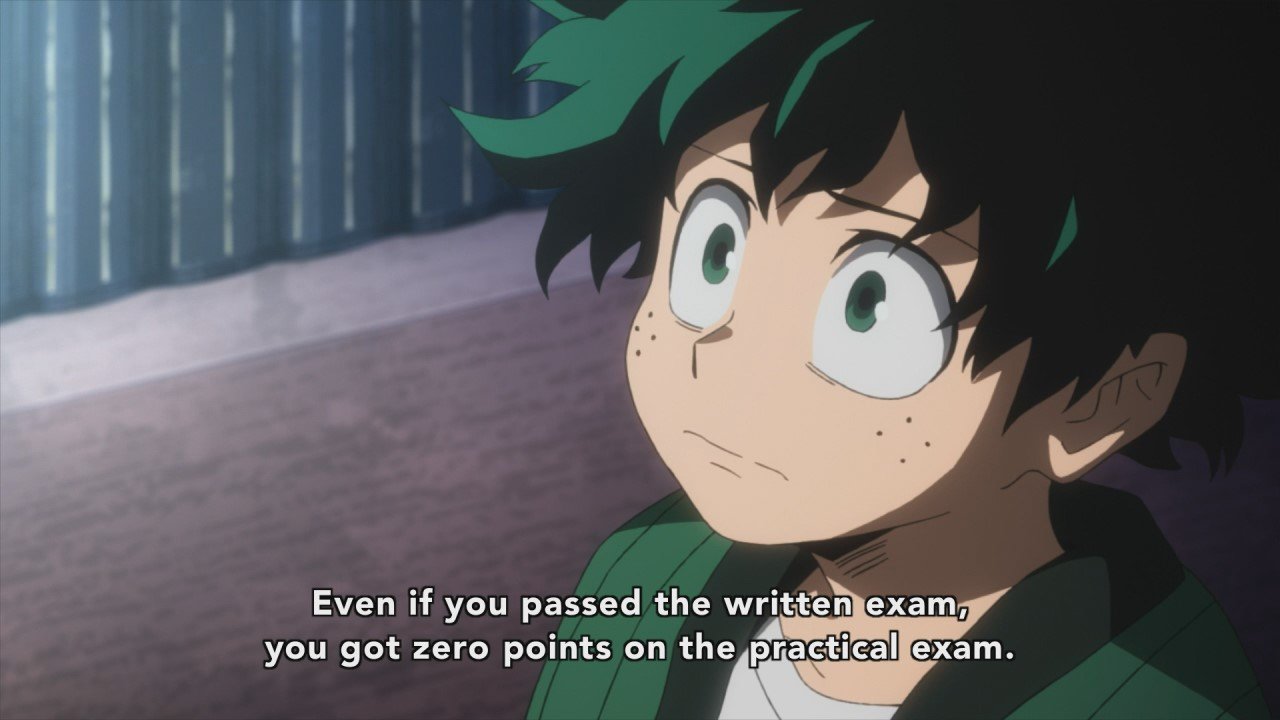 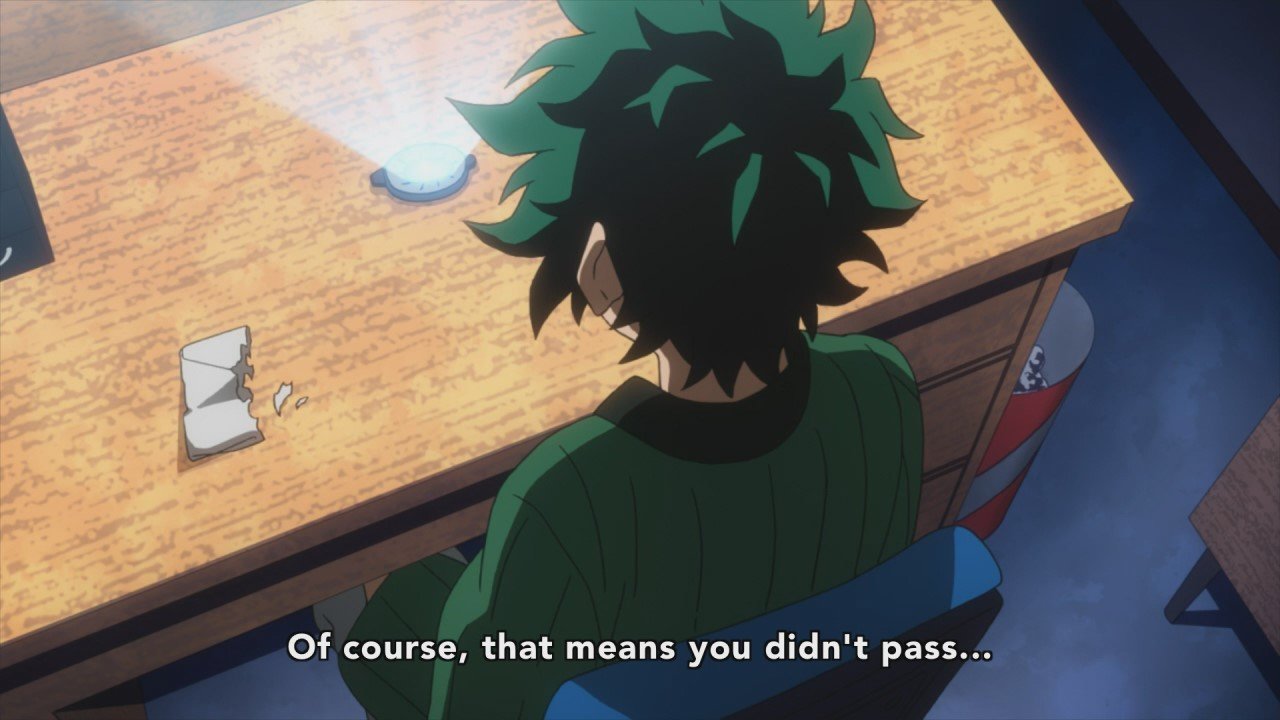 Fooled ya? But wait, there’s more! 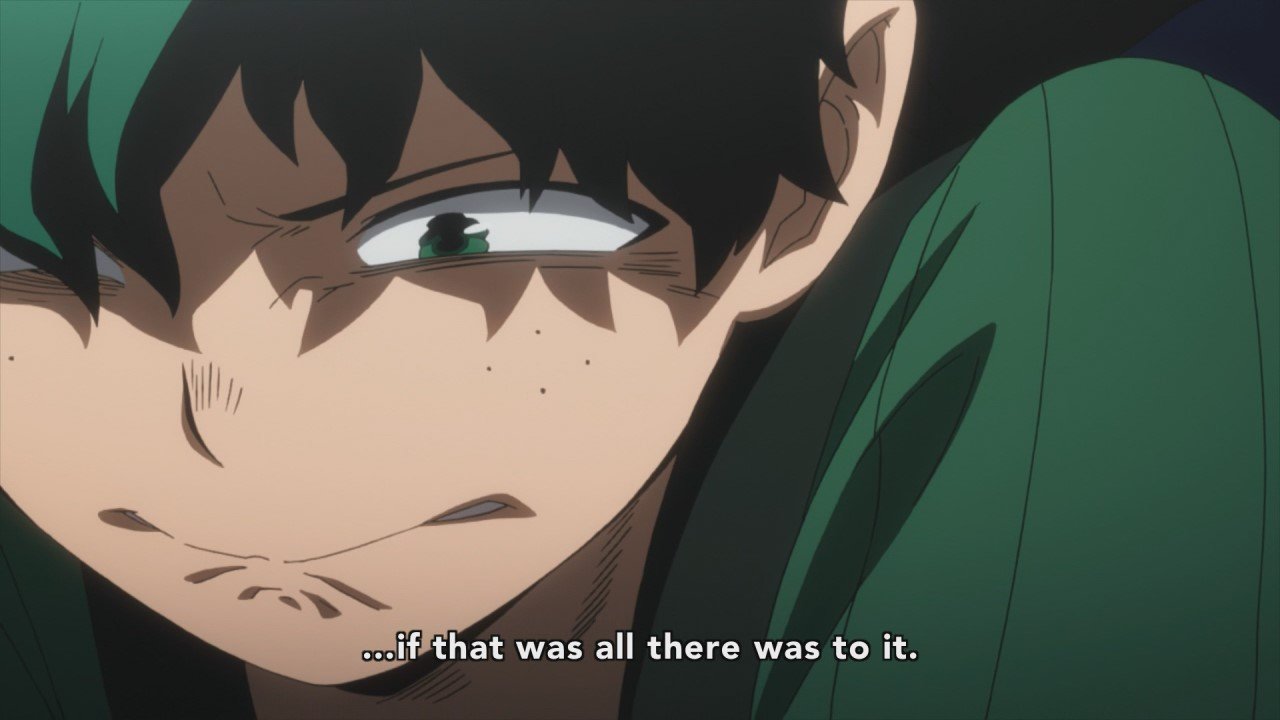 Of course All Might kind of mentioned the obvious thing 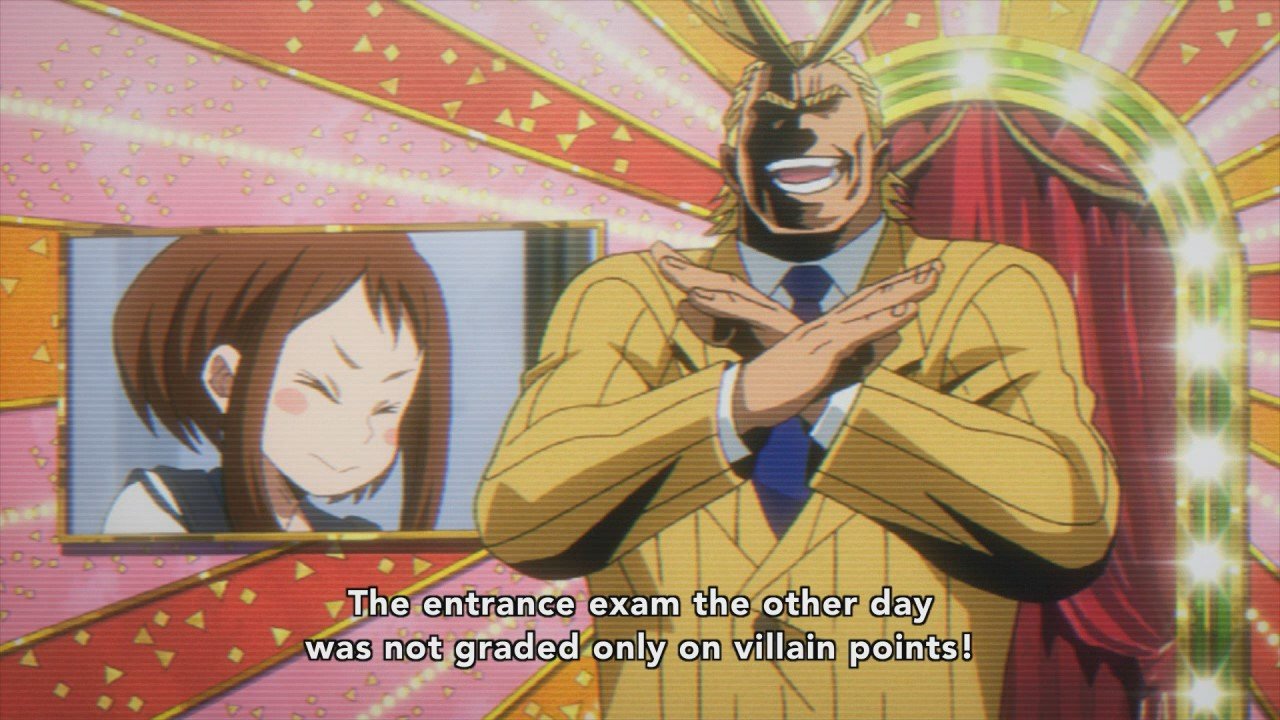 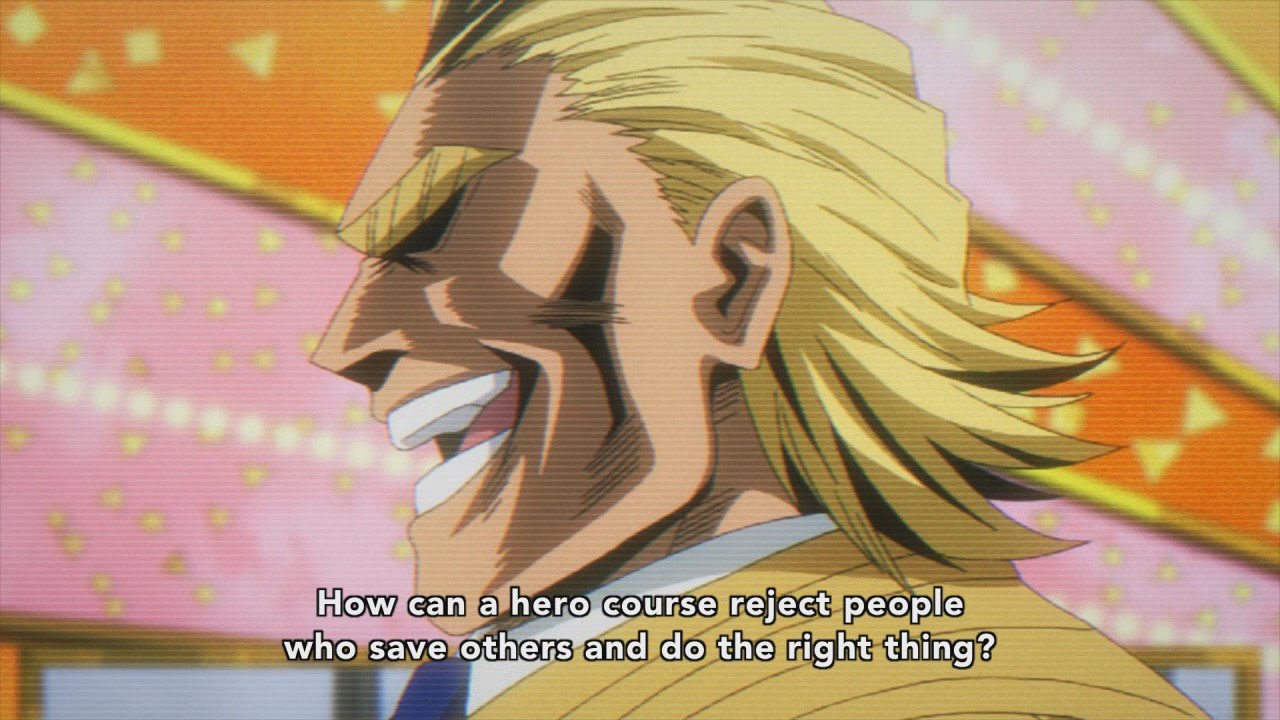 Actually, that makes sense. How can a hero course ignore or reject people who actually saved others and do the right thing. So Izuku passes by what they call Rescue Points. 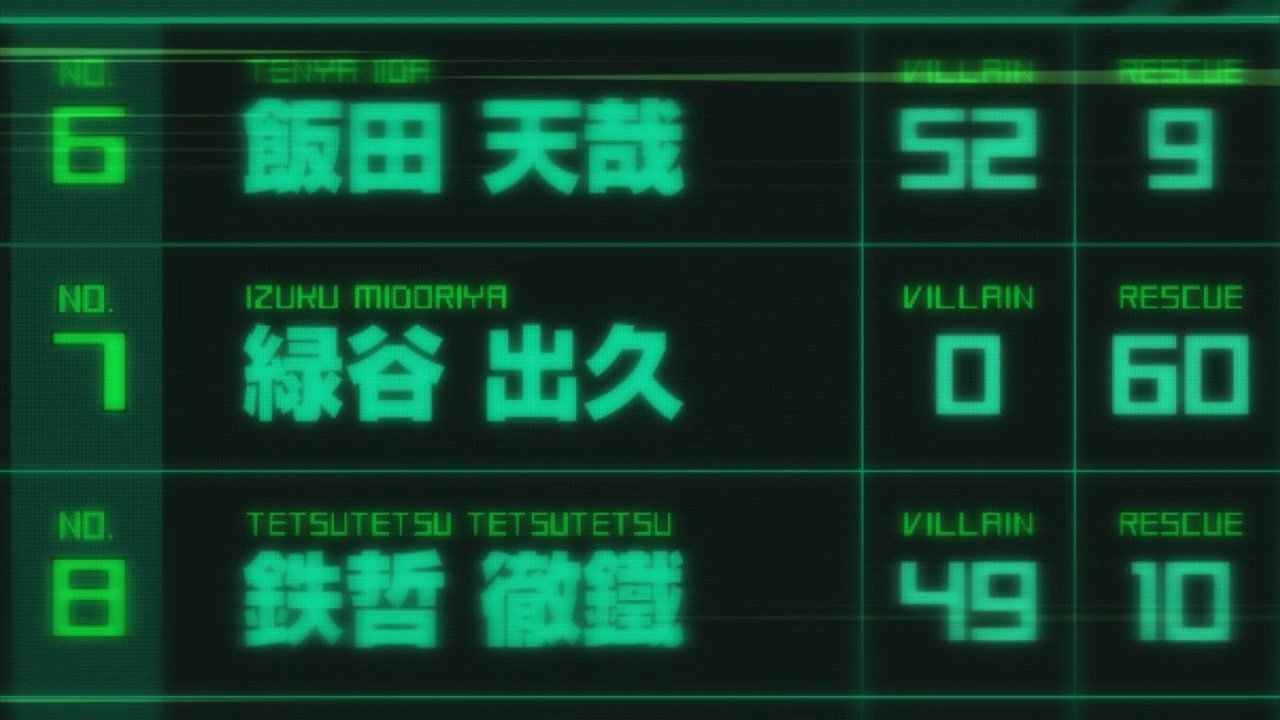 With a staggering amount of 60 points, Izuku and Ochaco passes U.A. High. 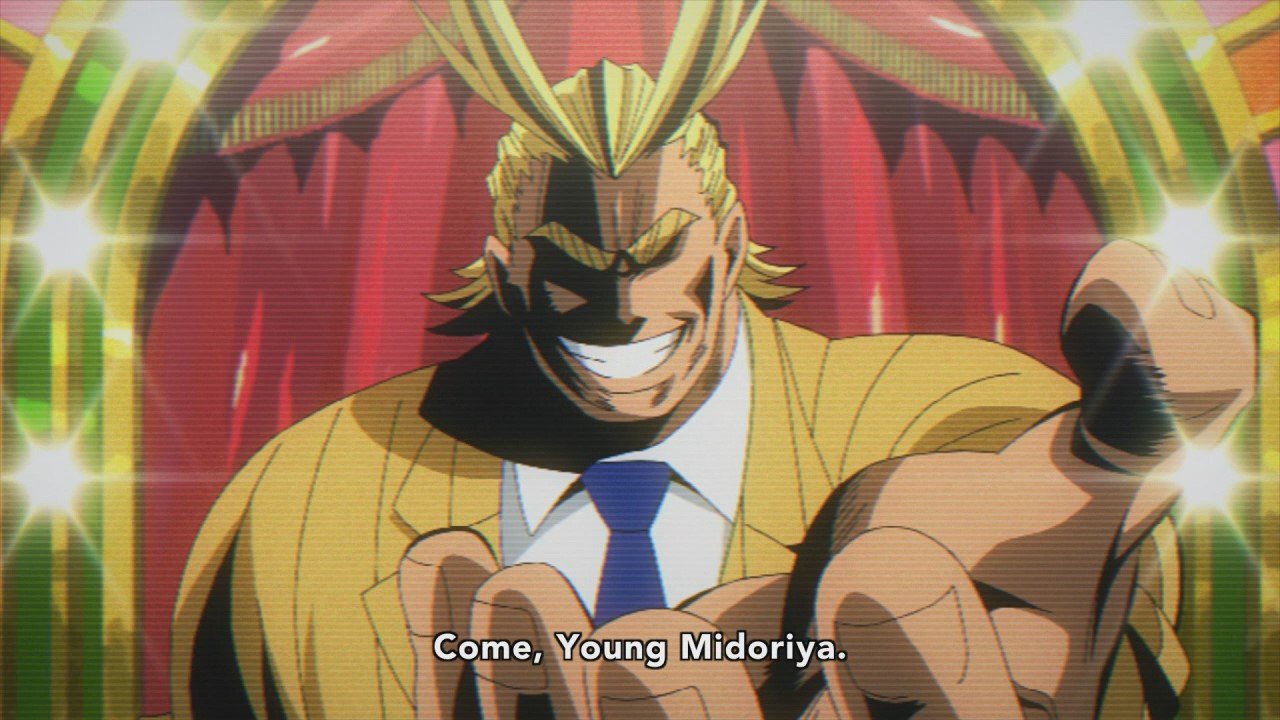 Episode 4, while it feels very short is one of my favorite episodes for Boku No Hero Academia. Not only did this episode bring to focus what being a hero truly is, and it’s not just about beating the bad guys. But also, if not the most important thing of what makes a hero a hero, is to actually save lives and inspire others to action. 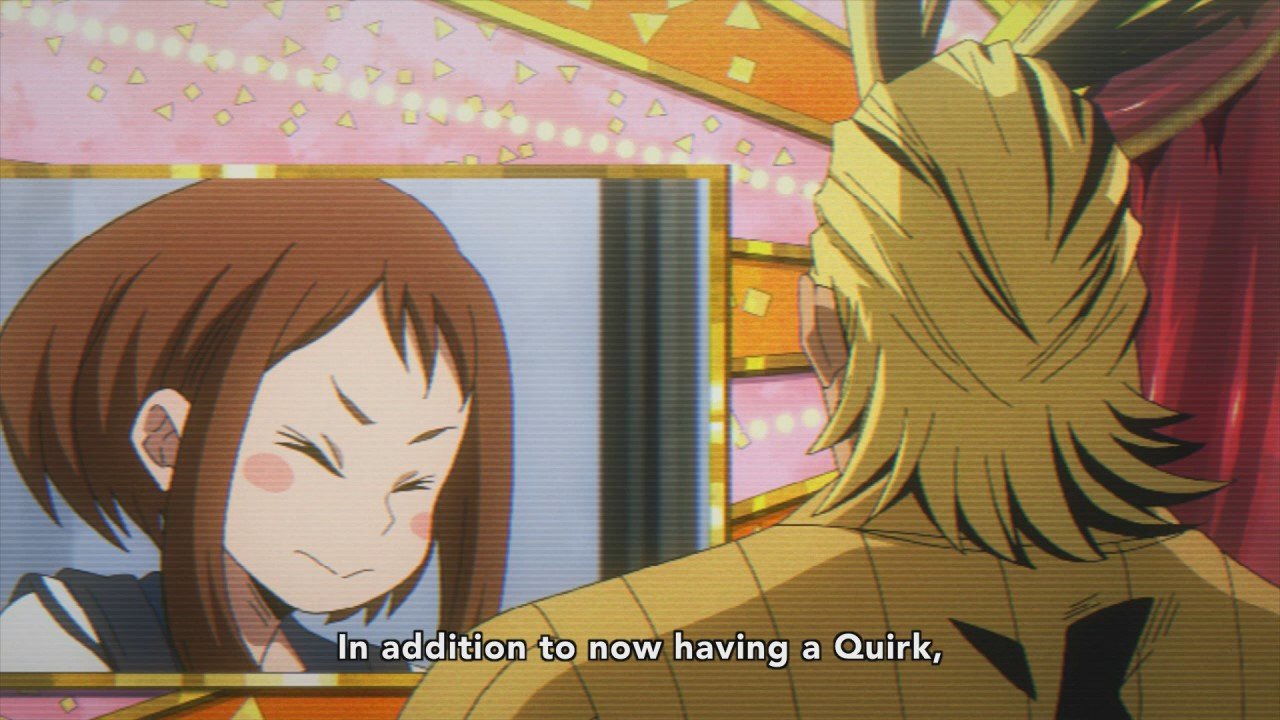 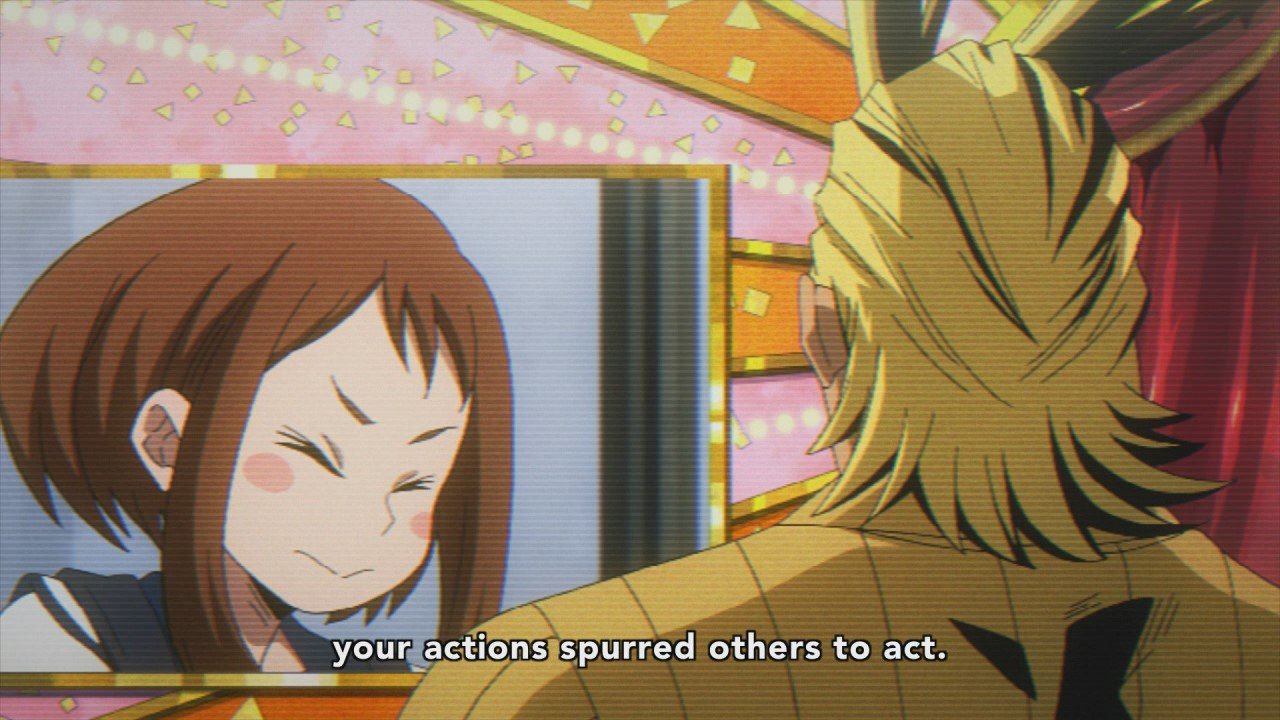 Of course this episode is without it’s head I mean specifically with All Might’s power. I initially thought that since Izuku has inherited One for All, wouldn’t that mean that All Might would’ve lost his power to bulk up? While we did see him in his gnarly form in the control center of the testing facility, we now see him all buffed up in the hologram.

What I am doing though is just setting that minor detail just hang in the air a bit for now. Since I’m expecting this to be explained in later episodes.

So far I have enjoyed my trip with Boku no Hero Academia. And it has been an inspiring series so far. I hope they keep up the pace for this one.