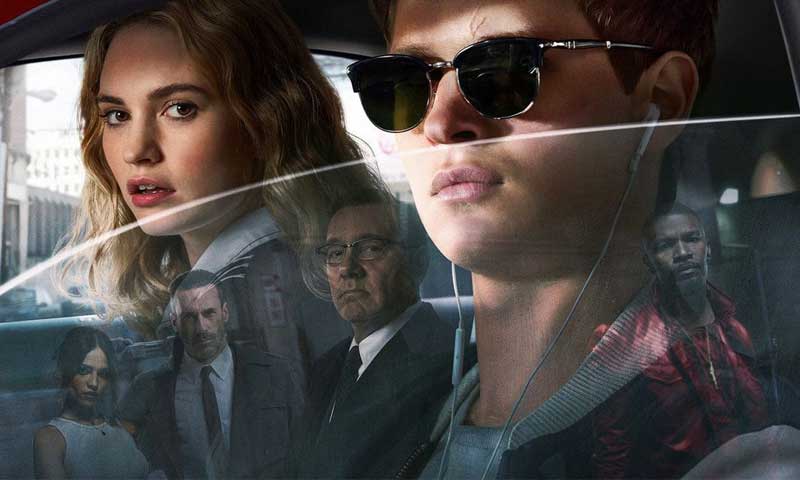 Baby Driver is the Best Musical of 2017

Ok, so maybe not a musical musical. More of a really hip Spotify playlist put in the driver’s seat of a car with a souped-up engine. You’ll notice it right away in two first main scenes of the movie. As soon as Jon Spencer Blues Explosion kicks in with Bellbottoms, Ansel Elgort’s character Baby dives right into a magnificently choreographed car chase scene, it becomes apparent that this isn’t just a heist movie set to a cool soundtrack. By the time Harlem Shuffle plays, you will see that the film is danced along to specifically chosen mood-setting tracks. And though most of these songs are already established tunes of pop cultures past, they comprise the backbone of the car chase opera known as Baby Driver.

To be honest, the idea of Baby Driver didn’t really sell for me. With the repetitive drones of the never-ending Fast and the Furious saga, as well as strings of other unmemorable heist movies this past year, it’s a miracle director Edgar Wright even managed to drive a well-worn premise into new routes. Though the soundtrack plays a big role, even without it, the dialogue and the characters carries you over quite well without having a single dragging moment in its entire 2-hour run.

The titular character Baby suffers from severe tinnitus, which he blocks out by listening to music – one of his greatest passions. He marries the narrative to the beats, almost to a comedic but endearing fault. He works as an uncannily talented get-away driver for a rotating crew of colorful characters, headed by Atlanta crime boss Doc (Kevin Spacey), whom Baby owes a massive debt he’s been paying for job by job ever since the latter’s youth. Baby’s light of redemption shines in when he meets and falls for a waitress (Lily James), serendipitously singing Carla Thomas’ B-A- B-Y as she walks in. They share the same passion to “get the hell out of there” – living a life of nothing but music, the road, and each other.

One of the biggest strengths of the movie is in its supporting cast. They kick the story along with a piece of exposition and a bit of levity here and there, poetically establishing their own idiosyncrasies while still managing to make their characters personally appealing. Even Jon Bernthal’s character makes himself memorable even though he only stays for the first ten to fifteen minutes of the movie. The only real flaw of a character is in the leading lady herself. It’s not that she was portrayed badly. It’s just that she merely exists to be the outlet of Baby’s desires while hardly having any agency of her own. The audience only gets to know about her as much they do the rest of the cast when she should have been given more.

But what about Baby himself? Despite being a circumstantial criminal coping with a dead mother, a hearing problem, and introversion, Baby isn’t exactly playing the victim here, and under the wrong hands, Baby’s character could’ve easily been awkward and inconsistent. But Wright and Elgort have done an amazing job in portraying him as a charming and vulnerable hero you would want to feel and root for.

There’s just so much to love about Baby Driver – from the soundtrack to the homages to the subtle humor – that it almost feels rude to not be moved by it. It’s a movie that’s in love with its own coolness, with its own notions of love. It’s cocky, confident, and fun that you feel like dancing along whenever it puts on one of its tunes. Though it is actually categorized as an action crime thriller extravaganza, I found that Baby Driver, at its heart, is about the hero living his life from song to song. And not in a Disney Princess kinda way. More of like how we spend almost half our lives with earbuds in our ears, music drowning out the monotonous buzz of reality, replacing it with our own selection of greatest hits and remixes we deem worthy to be the official background music of our day.