ASUS TUF Gaming line boasts itself to provide a solid line of products that can withstand the most abuse laptops and components. And I was given the opportunity to experience their entry level gaming laptop the ASUS TUF Gaming FX 504 Laptop (the GD variant).

I was able to experience the 8th generation i5 configuration of the FX 504. Which means that the laptop has this set of specifications:

.Updated (01/09/2019): The laptop I was lent to play around with had some upgrades already such as the addition of a 4GB RAM and the inclusion of a 128GB M.2 SSD. Out of the box it had enough computing power that you can use Photoshop and Lightroom without any hitches as long as you don’t overload with the amount of programs out. Because of course you’d need to have more RAM to have multiple programs out.

One of the first things I had to test out is the laptop’s sturdiness in every day use. Since the FX 504 boasts itself as part of the TUF Gaming line, it should pretty much be able to make me feel that the laptop can withstand the day-to-day abuse we unknowingly set on our portable devices.

And I wasn’t disappointed. The FX 504 feels sturdy for the every day use. With the base of the laptop feeling rock solid while the monitor back plate has little wobble in comparison to the other laptops in this price range. Meanwhile, there seems to be a little wobble with the hinge that connects the monitor and the base of the laptop. While it’s not personally troubling, those who are used to having a more rigid hinge for this part of the laptop may find the wobble a little disconcerting.

The FX 504 is missing the SD Card reader that I’ve grown accustomed to in ASUS laptops since I’ve been using them extensively whenever I go out and do coverage with the DSLR. I really like that the connectivity ports are all bunched up in just one area in comparison to the GL553VD that I used to have which makes cable management easier most especially with me putting the laptop on a laptop cooler.

Using the usual programs I’m using for blogging with the FX 504. The experience isn’t too far off from me using my desktop running on better specs. I like how the laptop feels when I use it at home and when I’m out in a cafe. The ports placed in one side made it easier for me to watch out for my stuff when I’m out in the cafe working or when I’m at home trying to use the laptop as my stats checking system during streams.

I actually love the heft of the laptop even if it’s just a little lighter then the GL553VD and even lighter than the ROG Strix GL504 Scar II. At least with the right laptop bag, the laptop won’t feel too heavy for a gaming laptop.

For a chiclet keyboard, I like how the keyboard feels when I type my articles. It’s cute that the

Of course, moving towards the gaming experience side of the FX 504, the laptop was able to deliver the expected output considering the specs of the laptop. I was able to run League of Legends at medium specs on both wireless and LAN connected mode without any problems.  Updated (01/09/2019): I had PUBG installed on the M.2 SSD so it was running as what I earlier mentioned, but with the base build of the FX 504, I highly suggest that you increase your patience if you install and run it from the 1 TB HDD, since you know, it’s still unoptimized as of this post. 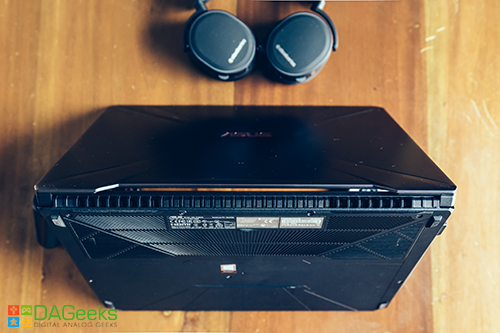 Moving to the laptop’s monitor and audio, the FX 504 delivers a lackluster experience for the audio. Of course it’s still inadvisable to play games like PUBG without a headset anyway.

My one concern with the FX 504 is that the fans are terribly noisy if you have them run on max while gaming. So if you’re someone who’s particular with fan noise while playing, it’s all the more important to not have the fan run on max of course, you actually just need to play with the laptop on a cooler environment.

Battery life is typical to gaming laptops so I was able to squeeze out around two hours without the laptop plugged in.

Overall, the FX 504 GD was able to meet the expectations I’d have with a laptop that has a 54,995 php price tag. Even on it’s base configuration, the FX 504 GD is able to deliver a solid experience. The design isn’t as overtly gaming centric as the ROG laptop line so you can bring this on meetings without being too gaudy to take attention away from your presentations. But it has solid specs that you can still play with the laptop at mid to low settings with no problems.

Updated (01/09/2019): The hitch with the FX 504 GD if you’re a person who loves to multi-task and have a lot of programs open at once, you’d need to definitely upgrade the FX 504 GD. Thankfully, it’s not that hard to find parts (during the time of this post at least) to upgrade like the RAM and the extra SSD (as long as it’s an M.2). So you have that much leeway in upgrading the laptop.

The FX 504 GD delivers optimum performance for both work and gaming tasks. It’s light enough than most of the laptops in this price range so it won’t literally break your back or your bank.