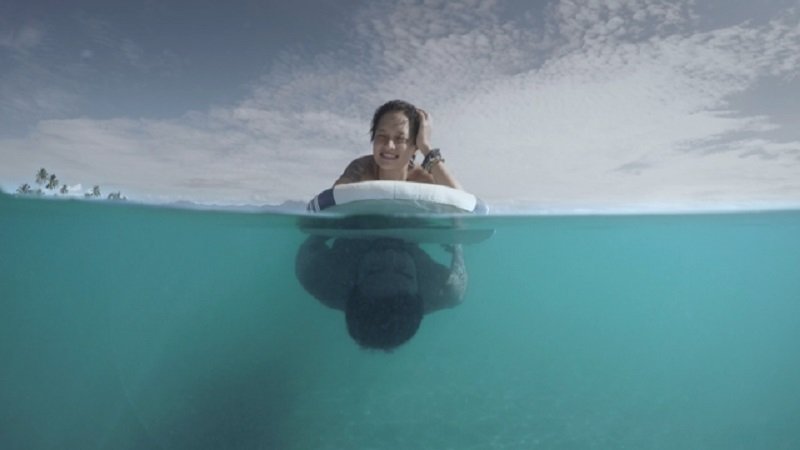 HaneyRawr
GeeksMovies
October 29, 2016
Every town has their own myths and legends, and Baler has a few interesting stories of its own. Set in the picturesque surftown of Baler, Aurora, where the 1970s movie Apocalypse Now was filmed, Ford (Sid Lucero) leads his happy go lucky life as a surfing instructor, and like his town, Ford has stories and myths of his own. Her mother, Chona (Ana Abad Santos) has perpetuated the story that Ford is the bastard child of the director Francis Ford Coppola, and has since been trying to reach him to acknowledge their child. When his childhood best friend, Rich (RK Bagatsing), returns as a new congressman with his fiancé Serena (Gwen Zamora), it claws at unresolved conflicts and Ford’s mysterious roots.

Apocalypse Child does away with technical artistry, though it does not starve of it, but focuses on the internal conflict and the relationships of the characters on screen. Each frame was thoughtfully made to emanate each of the character’s emotions – almost telepathic – may it be the tension between two childhood friends, or the painful stare of a jealous lover. The characters themselves are honest and relatable, and the stories aren’t unlike our own experiences which makes the film almost nostalgic. Like Fiona (Anicka Dolonius), who plays Ford’s surf 19-year old student and girlfriend, may at one point be our young and naive selves, despite how we convinced ourselves otherwise. Her believable performance was at times even painful to watch, reminding you of those drunken episodes because of lovers lost.

I love how Cornejo plays with the sequences, giving us a hodge podge hazed memory rather than a linear story, which adds to the climactic effect. The film unfolds and swells and crashes in a monstrous ripcurl. Somehow all the pieces tie together at the end, but does not leave all questions answered, leaving it to the audience to decide how everything is resolved. We see Fiona leaves in a bus, leaving the town, Ford, her grandma, her troubled look softening to a smile. Ford and Rich ride the waves, brothers once again.

I dare say Apocalypse Child is one of the best films made this year. Cornejo and Jimenez’s writing is agonizingly beautiful but not overdone. It shows how sometimes we lie and create stories to appease ourselves from reality. That no matter how legendary we see ourselves to be, we sometimes fall from our surfboards. It shows the truth and why we resort to our tall tales and mystery.