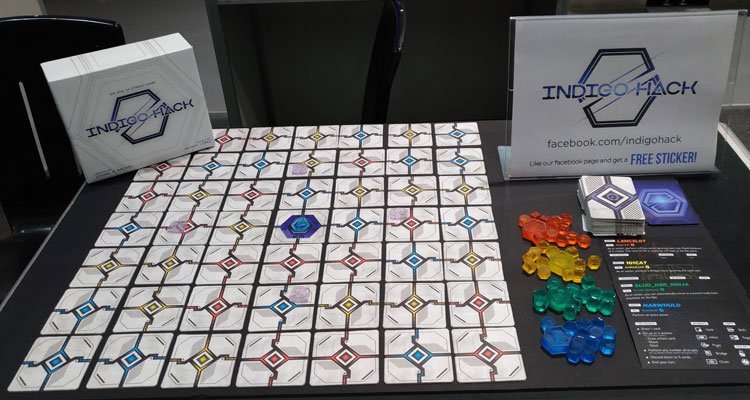 Hacking, the act of using programming to take control of others’ computers, at least that’s how i describe it. In Indigo Hack players take control of one of 4 hackers under different aliases and be the first to retrieve the precious data hidden in the very depths of server.

Setup is really simple, using the tiles setup a 7×7 grid with the data at the center, on the side will be the hack card deck, which contains red, blue, yellow, and gray cards. As I mentioned before, each player will take control of 1 of 4 hackers, each with their own special skills usable once per turn. They will navigate the server which is made up of a 7×7 grid of tiles colored red, blue, or yellow, with the precious data at the very center. Each player will set up their player token along with their hexagon cube on one of the corners of the grid. Along with this, each player will be given a starting hand of 2 cards, which will be used to move around, steal cards, and even make scripts. 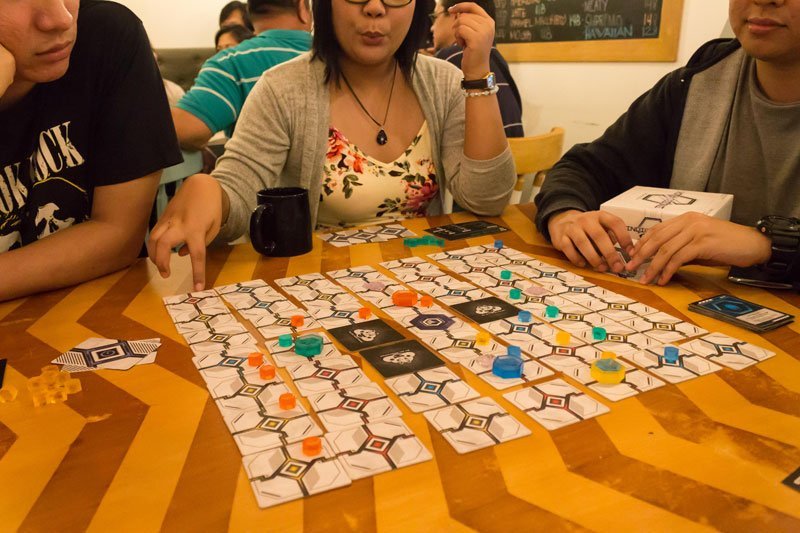 Players will take their turns one at a time. At the start of their turns they will draw 1 card, after which they are able to do 3 actions. The actions they are able to take are to Move, Steal, or Draw. In the game there are 5 ways to move around the grid: Hack, Infect, Pivot, Bridge, and Chain. Each time a player moves onto a new tile, he places his cube onto that tile replacing any cube that was there previously.

On their turn, if they are standing next to the tile where the data is may take a steal action. During a steal players are given 2 sets of 3 cards, one for the attacker and one for the defender. They will each choose a card, if they are the same color then the steal is successful. Before attempting a steal, a player may also discard a pair to make it easier to steal the data by removing 1 color. Once a player has made a successful steal, they are given 1 extra action for that turn only. The last action a player may do, which is pretty self explanatory, is to Draw 1 card from the deck. 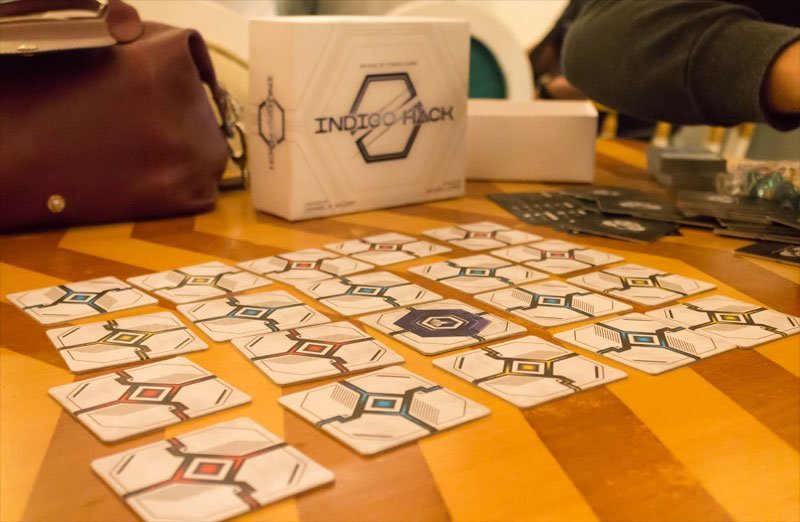 Apart from these 3 actions players may also manipulate the board by using the scripts. To use a Script, you will have to discard a card, there are 2 Scripts: Shift, and Toggle. The Shift script allows players to move the tiles in one direction, and moving the tile that got pushed out into the empty space. Players may not move a shift a row/column that a players is currently standing on. The other script is the Toggle, which flips over one of the surrounding tiles making it impossible to land on unless it is toggled on again.

The game is finished when a player has brought the data to their corner, or 1 turn after the deck has run out of cards.

The game comes with 34 red, blue and yellow tiles, and one purple tile. It also comes with a deck of hack cards, 6 steal cards, 4 character sheets, 4 Character tokens, and cubes of the corresponding colors. 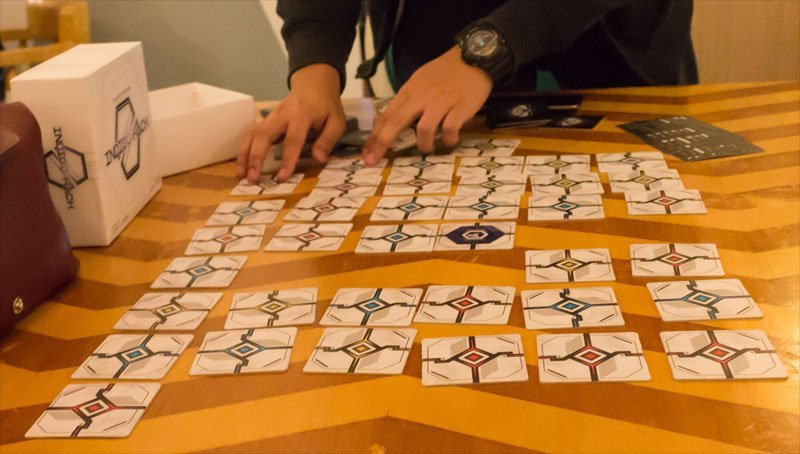 The tiles are made out of the usual board material that other games use, and the card stock is pretty soft. What really interested me in the game was the Resin tokens, and cubes. They felt really solid, though there were some flashes from molds, its nothing a little sandpaper can’t fix. The color choice was really spot on, making it easy to differentiate between each player’s own cubes on the board, making strategies that much quicker to formulate.

The theme of computer hacking was what drew me to the game. Though I did expect more of a programming game given the theme. However it does encourage thinking a few moves ahead just like in coding.

We only played 2 games but it was a very fun. Some approached it differently like trying to get to the data first, while others set up for after it was stolen, I personally used the latter strategy and won the first game. The second one however was a lot of cut throat, most of them targeting me. 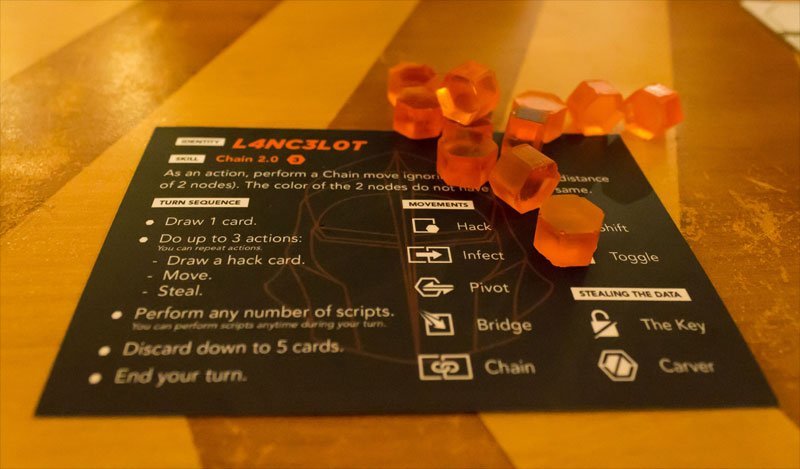 The game went on to the point where the deck ran out of cards and we went into the shutdown round. On my last turn I had drawn the gray card which lets me automatically steal the data from a player. I survived the next 2 players’ attempt to steal it from me, only to lose because of a lucky gray card draw at the last player’s turn.

Is it fun? yes. Is it prone to win by sheer luck? what game isn’t? I look forward to playing this game again.