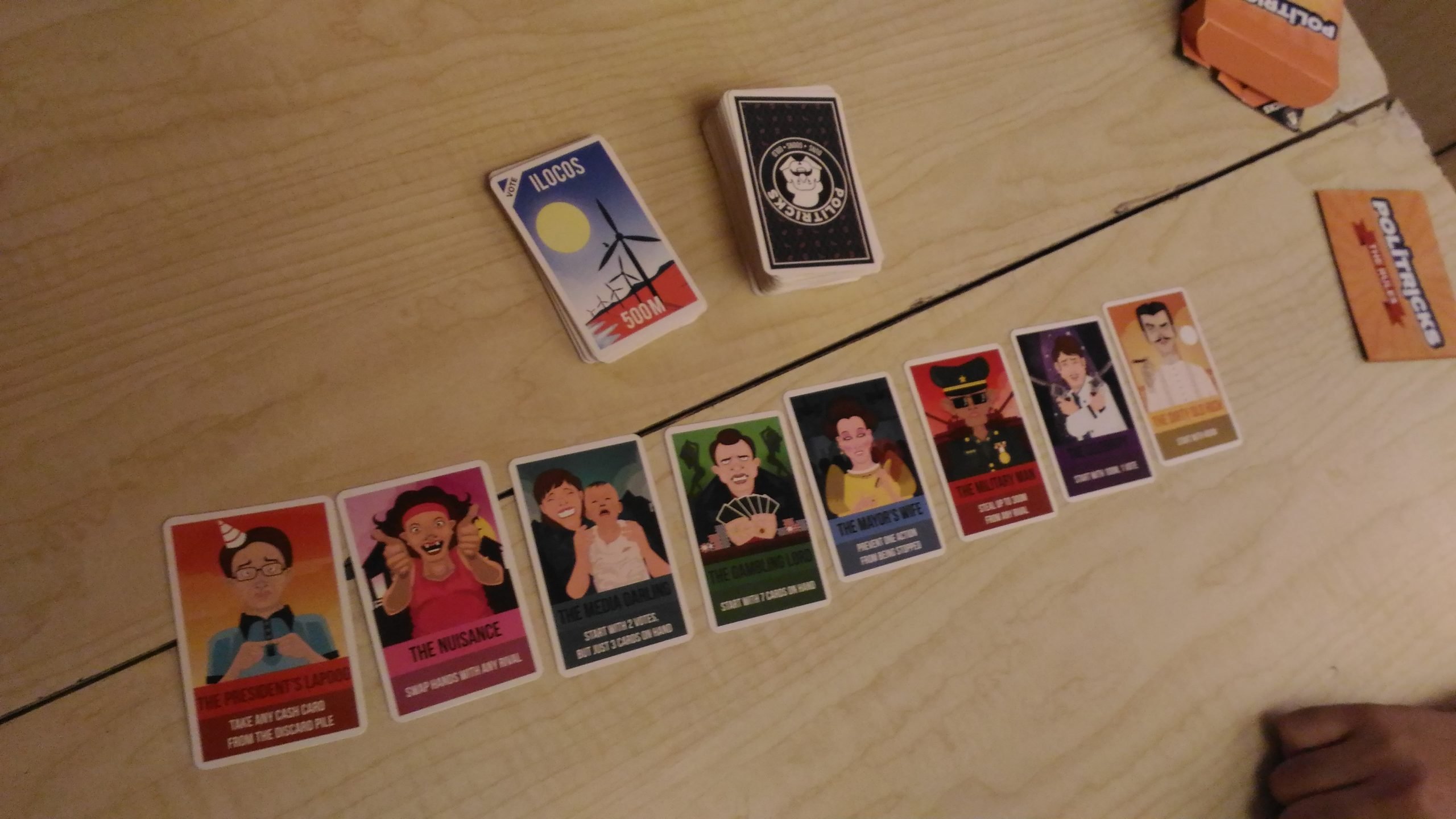 Politricks is a surprisingly enjoyable game that uses all-too real Philippine political practices into a surprisingly addicting card game. Games can go for as short as a 5-10 minute excursion or as long as a 30 minute slogfest depending on the cards made available and on the players on the table. At best, Politricks is an enjoyable trolling game where the most devious can flourish, at worst, you’ll be the sacrificial candidate that will be the “sacrificial lamb” to any of the snakes you’ll be playing against, just like in real life.

The other things that make Politricks work:

Anyone who is familiar with how Monopoly deal works has an upper hand in trying to understand Politrick’s gameplay. The main goal of the game is to get the most votes among your opponents. To start off, you have a choice of eight candidates: 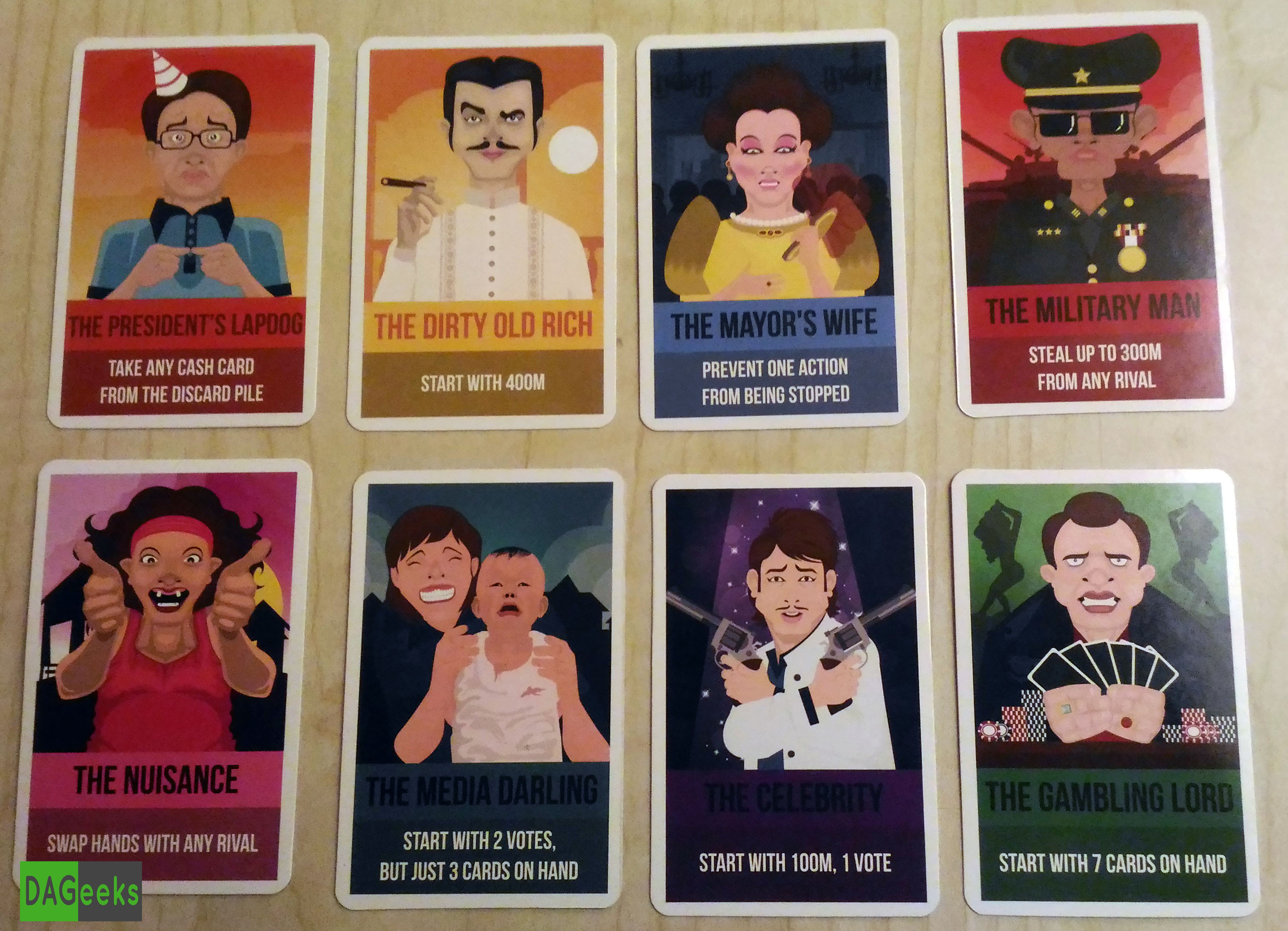 And that each candidate has a one-time use special ability that is activatable either at the game’s start or at any time within the game. You will then be given a set of cards which are segregated into two types. The first one are the action cards: 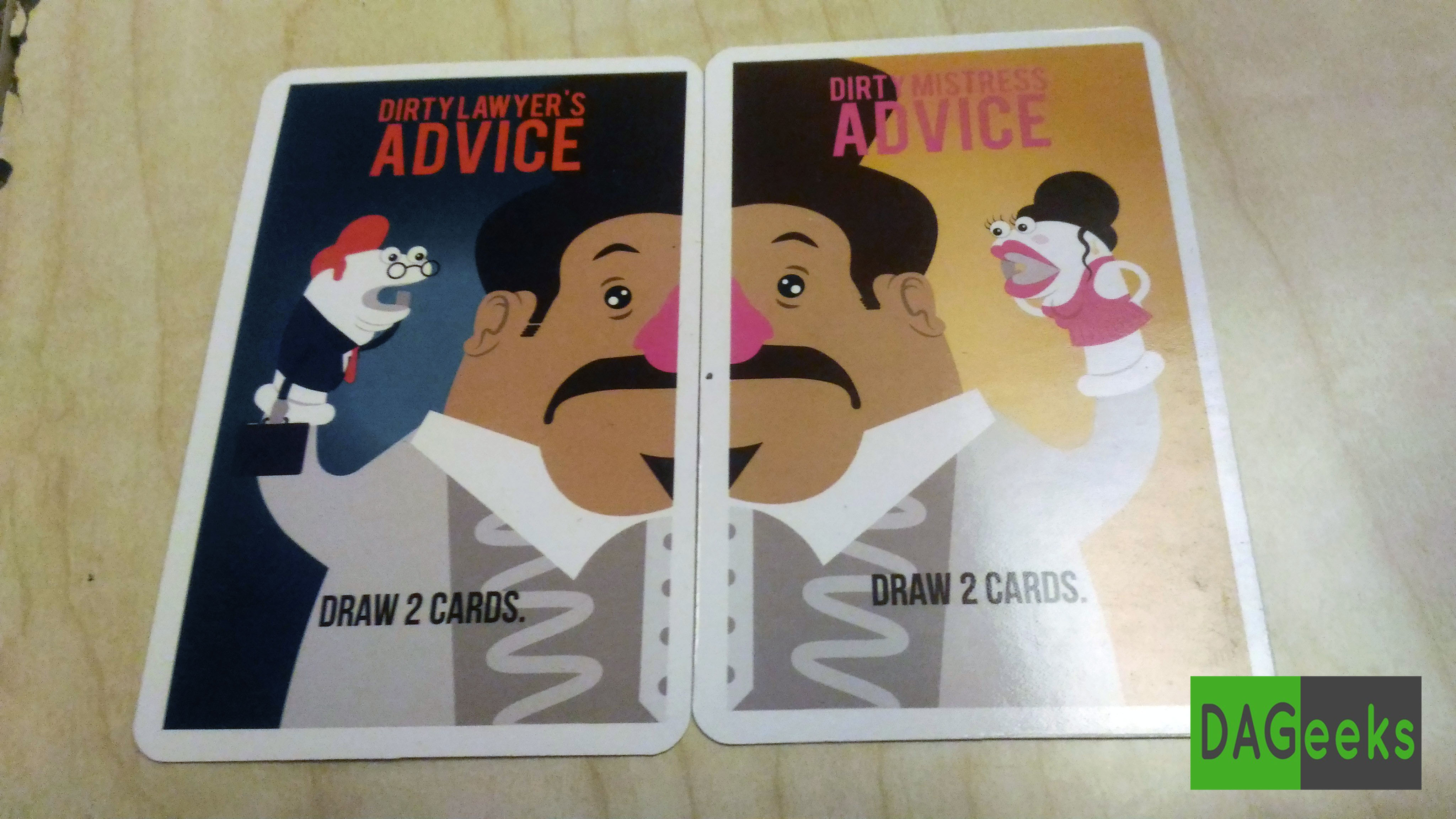 and the second one are cash cards. You can then do a maximum of three actions per turn where you can put down action cards, bank in your cash cards (just like in Monopoly deal), use those cash cards to outright “buy” votes and or use your politician’s special ability.

As mentioned in my verdict, Politricks games can be real short or super long depending on the cards played and on the players playing. I mentioned that again because I loved how the gameplay design is simple but allows veteran card game players (or at least min-max players) a bit of complexity in doing their card combos. I also loved that the game’s difficulty scaling is not dependent on the prescribed gameplay mechanics, but on the players you’ll be playing against. This just means that the amount of fun you’ll be able to get out of Politricks is dependent on the people you play with. 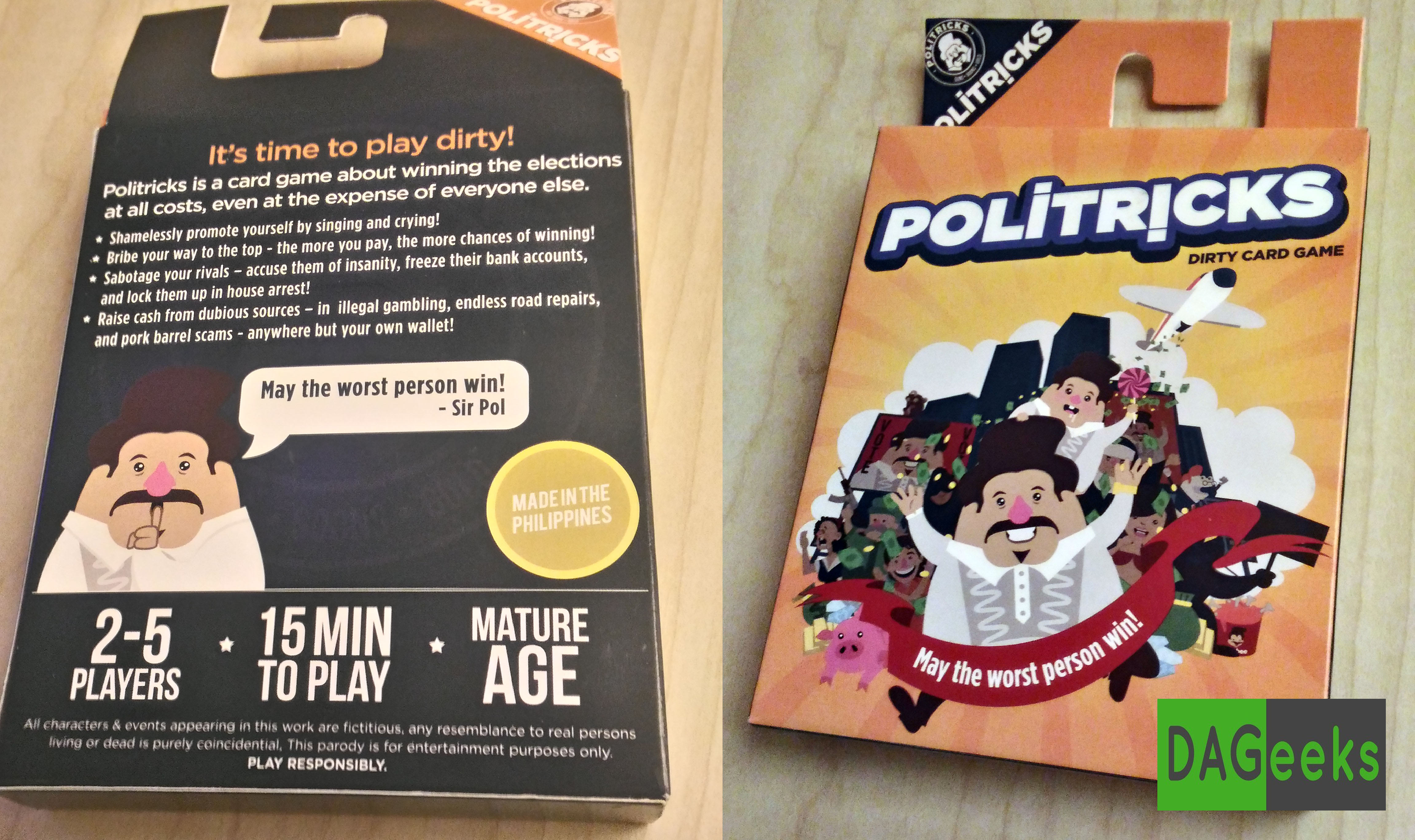 On a good set of hand cards, the game’s pace is frantic and fun. Votes and cash will switch hands a lot and more so when there are more players in one game. On the flipside however, snowballing can and will happen if one or majority of the players get a real raw deal. But, then, the game does try to at least stop this from happening with certain cards that will ruin a person who’s ahead of the game, or that one card that literally boots the player out of the game.

Another thing that really stood out with Politricks is beautiful print quality of the cards and of the box. At first glance you’d expect a card printed and designed like this: 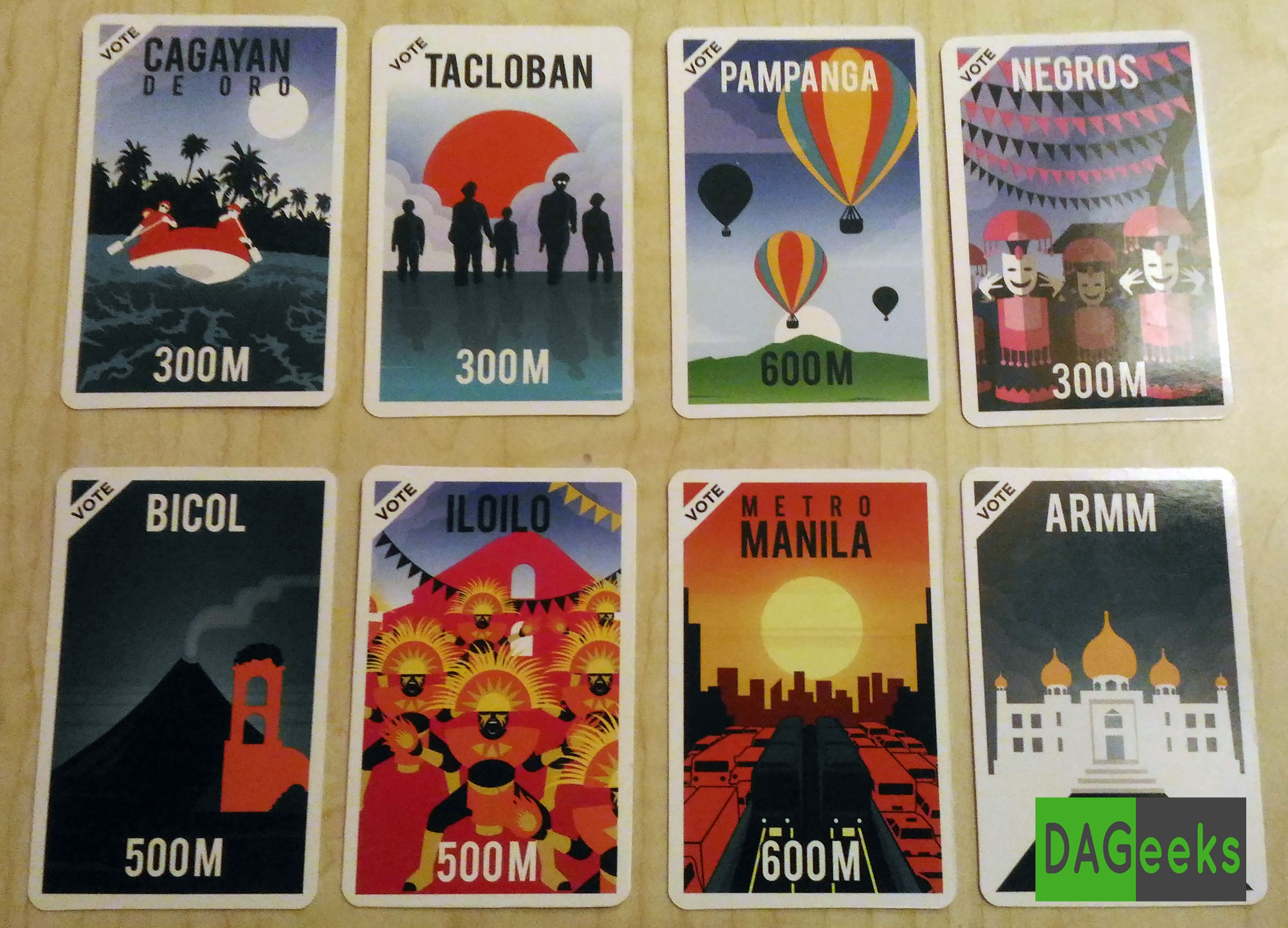 isn’t done locally. But according to the game creators, everything was printed here int he Philippines. The card quality feels like you’re playing an international card game, like say, Monopoly deal or Exploding Kittens.

Politricks currently retails at 499 php and can only be purchased (as of this post) at Laruan ATBP., and Snacks and Ladders, Firesword and Dragonforge.

You may now also visit the official Politricks fanpage and order online at the convenience of your home. (via clicking on the “Shop Now” button or dropping Politricks a Facebook message”.  Additional delivery charges apply.

Here’s a semi-unboxing video of Politricks on the day I was able to test play the game during a LUGN event: