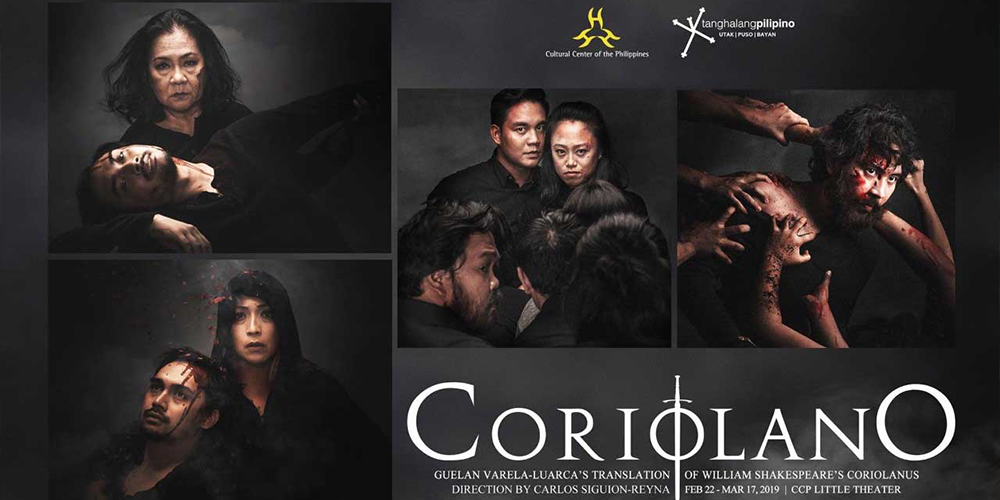 With its 32nd Theater Season still fresh, Tanghalang Pilipino (TP) continued to push the boundaries with its fourth production – a Filipino adaptation of William Shakespeare’s “Coriolanus”. Although the production had just opened, and while still very far from its full potential, the play was strong and powerful enough that it left its audience to ponder about their own political morality.

Aptly translated Coriolano, the tragic story was of a hero named Cayo Marcio (Caius Marcius), who was widely celebrated for his victorious military endeavors. Cayo Marcio, then, became involved in politics because of his mother, whom he had loved dearly. He, however, was later questioned because his behavior and temperament was discovered unfitting of the government seat. Consequently, the general was thrown out of Rome but not without a thirst for revenge.

The Relevance in the Classic

The beauty of a Shakespearean classic, likewise any classic for that matter, was their relevance to every period. Coriolano was just as much as a representation of the politics then as it would be now; especially with the local elections and the current state of Philippine politics in general. More so, the mob mentality that was woven within the story too. Without a doubt, audiences would be asking themselves who was really right or wrong in the situation and – if they had been a part of it – which side would they be on? What choices would they make?

Interestingly, though, the usual choice for political plays would be Macbeth or Hamlet. Nevertheless, TP had done a wonderful job in choosing Coriolanus over the staple two.

An Ode to the Bard

From the very beginning, it was never easy to translate a Shakespearean piece. The bard’s words would be complicated to rewrite in any language because of the meters in his poetry, which would often be coupled with his very complicated wording. However, Guelan Valera-Luarca’s effort to replicate the meters paid off. While still rough, Luarca’s translation hit the sweet spot between the deep Filipino language and the need for comprehension.

Kudos, as well, to the cast – their faithfulness to Shakespeare’s melody was definitely something to applaud.

The Impact in the Minimal

The overall design of TP’s Coriolano was minimal. It did not beat around the bush and was without metaphors. Which was all the best for the production. It went to show that sometimes there was no need for all the pizzazz to create a great theater experience. Moreover, the simplicity of the set design and technical design gave its own life and meaning to the play and its story.

It was not “dumbed down” script, which was a commendable thing to have done. Yet, the worry for a play with both complex language and storyline, would be the intellectual speed and depth of its audiences. Without a proper safe space to discuss, the play may rub the theatergoers the wrong way. Fortunately, there was a short forum during the opening night – which should be a practice every curtain call. Especially when schools are part of the audience.

TP’s Coriolano was not an extravagant play. It was very direct to the point that it did not need the spectacle. It was also as faithful as it could be to the bard, which – at least to some Shakespeare fans and loyalists – should be a bonus. Its social relevance, however, was its strong point as well as its danger zone; nevertheless, it can be easily addressed with proper dialogue. But, at the end of it all, the company’s version of the Shakespeare classic should definitely be one to look forward to while its curtains are still open.

Coriolano will be running up until the 17th of March, at the Cultural Center of the Philippines (CCP) Little Theater. Tickets can be bought at the CCP Box Office and at TicketWorld.