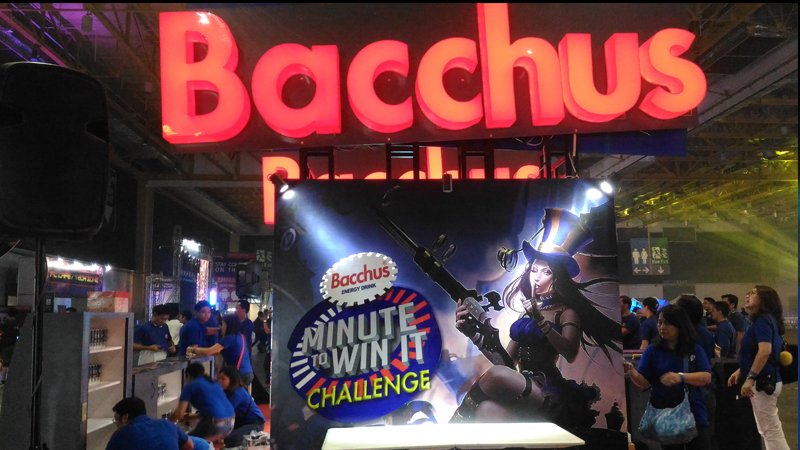 During our Rampage 2016 coverage, we got invited to join in on the media interview of Bacchus Philippines President, Amen Say and Dong-A Korea Vice-president Dong Hong Lee.

We got to hear the plans for Bacchus for the Philippines. With the company already locally present for more than a decade. The energy drink company is currently tied up with Garena for promotion on the local gaming scene. Here’s the interview video:

Sorry if the audio seems a bit bad, so I transcribed the interview below:

Question: I heard that gaming is a big phenomenon in Korea, and you’ve seen how Filipinos enjoy the game today. Where does Bacchus fit into this dynamic Filipino gaming community?

Dong Hoon Lee (Dong-A Korea VP): In Korea the game industry is pretty big and I see the same growth headed here in the Philippines. Philippine youngsters, young people, 20 something. Bacchus has been a popular energy drink in Korea in the last 53 years and for the growth of the Korean community especially in the active industry, active stuff is a good fit for Bacchus. So here in this game in the Philippines I think it’s a very good fit with the Bacchus. As both game and Bacchus activeness.

DAGeeks (Haneyrawr): So, because of this. You are the main sponsors to today’s event. So what after this, what would be your prominent presence here on the Philippines? What is your route, especially in the gaming industry also.

Amen Say (Dong-A PH President CEO): Well in the gaming industry, this is our first time sponsoring. But it’s not going to be our last definitely. Uh, we are talking to Garena and we’ve signed a deal with them where it’s an exclusive for Bacchus. It’s a multi-year contract with them and we see this as truly the main thrust for us to tap the e-gamers and we will continue sponsor. And not only sponsor but come up with promos to reward e-gamers when they purchase Bacchus.

Question: Why e-sports in particular?

Amen Say (Dong-A PH President CEO): Well, just like what Mr. Lee said, we see the trend. We’re probably a few years behind where Korea is and seeing how much e-games or actually e-sports has grown. We’ve come to see that it’s a very nice and very good market. The young people now are so into it and we want be able to give them what they need to continue their passion with the games that they want to be in.

Question: So this is the first event you sponsored?

Question: In the Philippines?

Question: So why Rampage 2016? Why League of Legends?

Amen Say (Dong-A PH President CEO): Well, League of Legends is League of Legends. It’s newest games and one of the most popular games right now. And this Rampage is a testament to that so just as Bacchus is the number one energy drink in Korea. With the e-gamers there. We want to introduce the same Bacchus to the e-gamers here in the Philippines.

DAGeeks (Haneyrawr): So, do you guys have any plans in creating a team or sponsoring a team in the future like what they do in Korea?

Question: So what makes Bacchus the perfect energy drink for gamers?

Amen Say (Dong-A PH President CEO):  Bacchus from before has never been just about physical energy. It’s really a complete drink and that provides you with physical endurance, gives you vitamins that you need, and especially to give you the mental focus or the mental toughness and that’s why we always, from the beginning of Bacchus here in the Philippines, we’ve always talked about the mental energy aspect and of course we know that in e-sports, it’s all about the mental energy than the physical right?

DAGeeks (Haneyrawr): You’re also creating a niche for the e-gamers especially here in the Philippines will you be marketing also aside from gaming? Will you be doing marketing outside of gaming?

Amen Say (Dong-A PH President CEO):  Yes we do, because we have different variants. We have a variant that is for the older people, we have a variant for those, the sugar-free,  for those who are more conscious with the calories that they take and or for those are diabetic but they also need the energy boost. The carbonated was really tailor made, we collaborated with Korea and worked for around 1-2  years to come up with this  for the young and especially for the e-gamers. Something that doesn’t just give you with all those benefits but also with those nice refreshing taste that you don’t get from any other energy drink.

DAGeeks (Haoson): Since there’s a connection between Bacchus korea and here, will we be see eventually, bringing in some pro-gamers from Korea to the Philippines? Will we have those moments?

Amen Say (Dong-A PH President CEO):  Just wait for our time on stage. You will be surprised.

Question: How do you describe Philippine gamers compared to Koreans? Based from experience?

Dong Hoon Lee (Dong-A Korea VP): The capability and competition-wise is almost the same. It’s head on head collision. Globally, they are competing with each other so it’s good.

Amen Say (Dong-A PH President CEO):  Please watch out for our talk. It will be a nice surprise.

Question: As for the variants, will you be bringing in your other variants from Korea?

Amen Say (Dong-A PH President CEO):  Bacchus has been here in the Philippines for 12 years now. So we have the regular variant, and we have the sugar-free and that one that we are launching now is the new variant which is the carbonated one.

Question: Since the Filipinos enjoy their carbonated drinks.

Amen Say (Dong-A PH President CEO):  Yes. Thank you and see you we’re going to be on stage soon.

So there you have the whole interview. Oh and for the “surprise” on stage. We have this video:

Yes that’s right! We have Faker leaving the people at Rampage 2016 a message.