Squeenix has yet again proven that it’s the world’s greatest sugar daddy with the release of the 2nd Ariana Grande-inspired character for Brave Exvius.

Starting today till September 1, players of Final Fantasy Brave Exvius will get the chance to get the Chic Ariana and other Ariana Grande inspired items like the Fashionable Dancewear, Microphone Stand, and Magical Scrunchie during the Summer Ariana Event. Players can also play in stages inspired by Ariana Grande‘s live performances.

Also, players would need to battle a new epic boss, Bard Spirit, to obtain the Chic Ariana unit by completing the first stage of the Musical Showdown event. 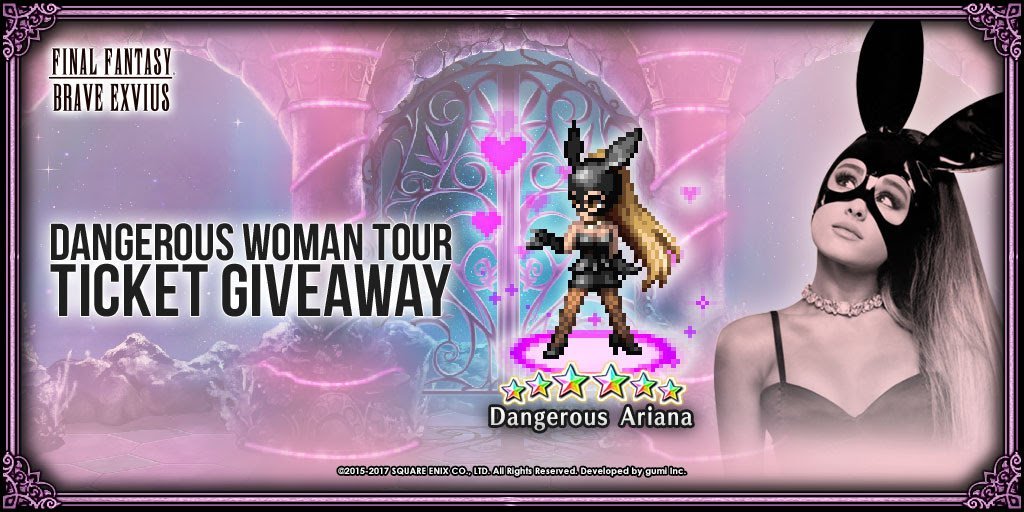 In commemoration of the event, Brave Exvius is doing a special giveaway at the Final Fantasy Brave Exvius fanpage that started last August 15 – till August 27, 2017 and Squeare Enix will be giving four tickets with backstage passes to Ariana Grande’s Dangerous Woman Tour. Also up for grabs are two tickets to Ariana Grande’s Formula 1 Singapore Grand Prix Event happening on September 16, while two other winners will receive tickets to her live performance at the Taipei Arena in Taiwan this coming September 18.

To participate, players will need to post an in-game screenshot along with a message to Ariana Grande and Brave Exvius in the specified Facebook comment field. To know more about the giveaway, you can head to this link.