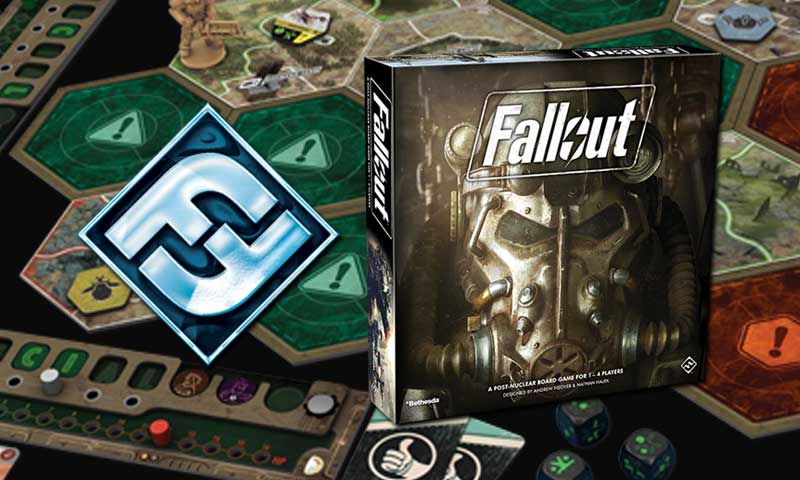 Fantasy Flight Games has announced that they’ll be releasing a board game version of the video game, Fallout that is slated to be released at the fourth quarter of this year.

Fallout (ZX02) allows 1-4 players to explore the wastelands found in Fallout 3, 4, and their other DLCs. You have the choice to either work together or work on your own. Characters move around the board unlocking hidden areas in the map just like how you discover places in-game. Players can either follow the main quest line the game provides or go of on their own exploring other vaults.

Based from the release, the board game version allows players to have choices on their actions in-game. Just like how the game plays out. In fact, some key video game elements have been used for it’s board game counterpart. With the most important, the S.P.E.C.I.A.L. system taking center stage as the board game’s main tracking system.

Key video game scenarios to Fallout titles will be used in the board game which are namely:

The brief has mentioned, that even if the scenarios are pre-determined per location, the rest of the map will vary with every setup, allowing each survivor to suffer as many unique deaths as they please, game after game after game.

Scenarios will also determine which two unique factions you’ll have the opportunity to fight against or befriend.  In The Commonwealth for example, the Railroad and the Synths go head to head (assuming you haven’t already done the beheading). On the back of the scenario card, you can mark the progress of these two factions, giving each side more power. Should one of the factions progress to the very end of the power track, the game will end, whether there is a winner or not. Allies are only allies as long as you’re worth something to them.

Also, scenarios also sets up and drives the main quest players can follow in the game. Completing one of the actions on the scenario card will cause the noted effects, move the story forward, and reveal even more quests. While the main quest cards will more often than not impact the factions, side quests will allow you and the other survivors to explore other stories within the game without pushing that primary narrative too far ahead.

So far, we were given a glimpse of some of the elements found in the game here:

For more info, you can check out the Fallout board game page on this link.