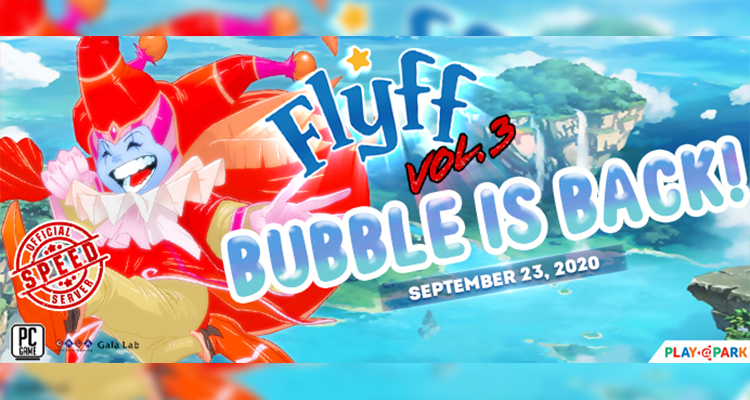 PlayPark Philippines has announced that it’s opening its Server limited-time event for the Bubble server.

The new speed server is Bubble’s way to aid players to rush level in the game. The Bubble Server will feature a 25x EXP bonus for characters and pets, 15x drop rate, and 10x Penya. The level cap is also increased to 170 and allows players to access their 3rd Job.

Guilds will also get daily siege activities as well as competitive Guild vs. Guild mode. PK areas will also be open for 1v1 battles for players.

For more competitive players and guilds, there will also be the Speed Server Guild Siege Champions event as well as the Heroes of Dragon Emblem Tournament (HoDET) Online Edition, which is a lead-up event to Flyff Philippine Championship (FPC) 2020, the biggest tournament for Flyff in the Philippines.

The Bubble Server also introduces the new Devil Armor Set, Ultimate Devil Weapons, and the Meteonyker Set for players to hunt and collect. A Devil Weapons and Armor Exchange NPC will be set up as a way for players to receive these new items. For official stats and to see how the armors and weapons look, check out the official announcement here.

To add more fun to the opening of the Bubble Server, the PlayPark Flyff Team has lined up a series of activities, sale events, and systems for players to enjoy. Rewards await the most active guilds while bounties will be introduced for the mightiest Speed Server Hunters to chase after.

Bubble will also open his Speed Shop, where a rotating set of items will be on sale Among the selection of sale items on the Speed Shop include rare pets, flying items, accessories, and fashion skins.

The Awakening System, as well as the Socket Card and Lord Systems will also be included in the Bubble Speed server so that you can further increase your weapons’ and armors’ power levels. The speed server will also contain a Card Socket Upgrade system as well as the opening of all dungeons for all players to raid.

There will also be new activities open to players and guilds. For the complete list of activities, check out the official PlayPark Flyff announcement here.