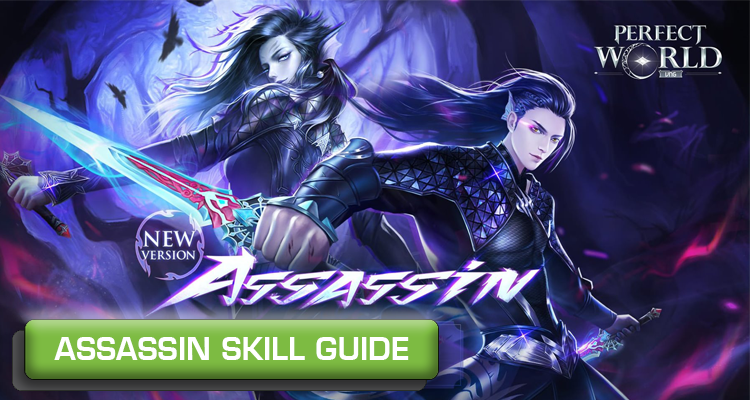 Perfect World Mobile recently released the Assassin class, and we’re here to help guide you in your journey should you choose to explore the world as one of them. As a type, Assassins specialize in quick attacks and single-target bursts, making them really effective in PVP and as boss killers.

What makes them more interesting is that they are stance characters. When your Assassin enters Invisibile, some of their skills evolve. These evolved skills usually deal more damage, and sometimes, even have some changed properties.

Even better is that they also possess a lot of utility moves that aren’t just damage. They have skills that buff themselves, affect their mobility, and even their invincibility.

Now, some players may laugh at your Assassin when you put out some abysmal DPS. That’s usually what happens when you don’t get your builds right or when you’re not sure what your skills do.

In this video, we give you a rundown on their notable skills – what you should focus on as you level up, and what you could focus on as soon as you get cultivated to either Sage or Demon, and hopefully pull a sneaky and get those that laughed at you to run scared from your improved damage.

Your base skills are your life, so don’t worry about leveling them up too much. In fact, you would want to spam all the skills you have in rotation whenever you can. Not just 4 main skills, in most runs, you’d actually have to go round your entire skill wheel – not just for damage, but also for survivability options. 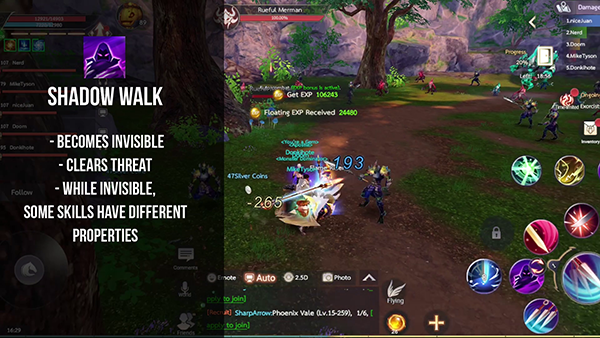 Let’s start off with one of your key skills: Shadow Walk. This makes you Invisible, meaning you can’t be seen or targeted, but be careful as you can still take damage from AOE attacks.

But the more important aspect of Shadow Walk is that it “evolves” your skills into upgraded versions, which reset to normal after use. Best part about this is that the cooldowns of the Stealth version are unaffected by the cooldowns of your normal skills, so this can lead to a skill barrage when timed properly. 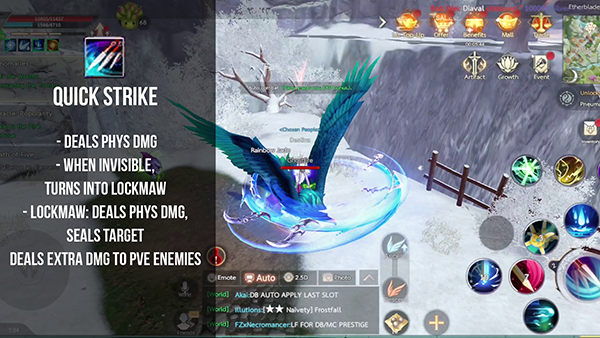 This skill will be your best friend all throughout your Assassin journey. It’s your first base skill. It’s on auto. It has one of the fastest cooldowns in your entire kit, so feel free to spam it. 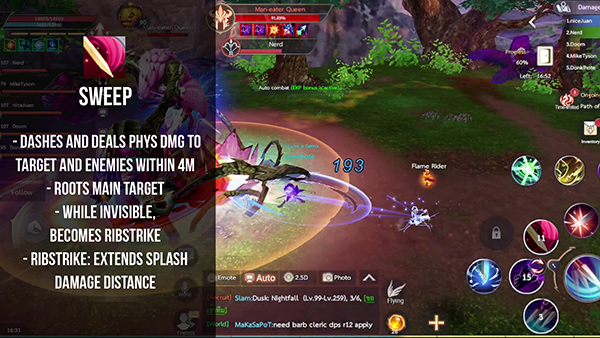 Sweep does a small dash before doing damage to a target and splash damage to nearby enemies. It also roots them for a while, making this move great for both early PVE and PVP.

It’s cheap and it has movement options for chasing and locking down moving enemies so it’s nice as an opener. While Invisible, it turns into Rib Strike which boosts the splash damage. 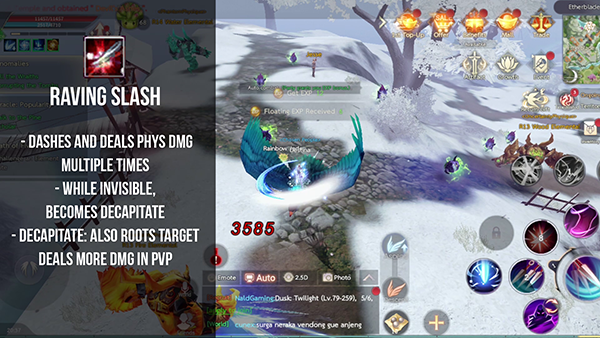 This is a fun skill as it has a short dash before striking the enemy multiple times. While Invisible, it becomes Decapitate, which is the PVP version of Lockmaw as it roots the target and deals increased damage to player characters.

There’s barely a point to use Decapitate in PVE runs as it gives no extra damage, but the multiple hits from the base version still makes it a good move to have in rotation. 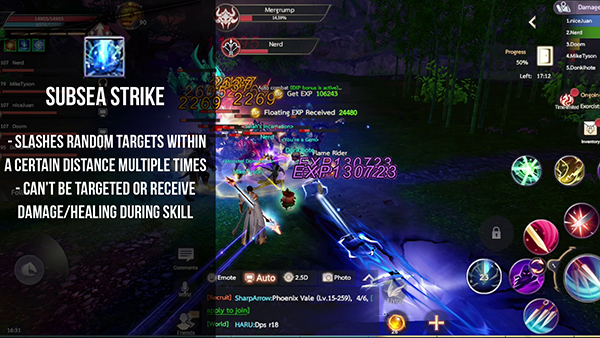 Subsea Strike is my favorite move in the entire Assassin kit. You Maximum Spider everything near you for big damage. While you’re doing it, you can’t be targeted or receive damage,so it’s a nice way of answering a big incoming attack, like a Boss’ AOE move that’s hard to dodge. It burns a lot of mana but the invincibility frames are worth it. 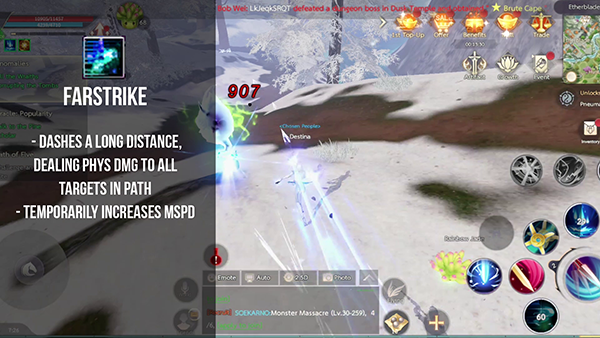 Farstrike is another one of your AOE options for PVE but it sees more usage in PVP. It lets you dash forward and deals damage to everything you ran through. Its cooldown resets  if you manage to kill a player with it, so it’s usually reserved as a finisher from those running away from battle. 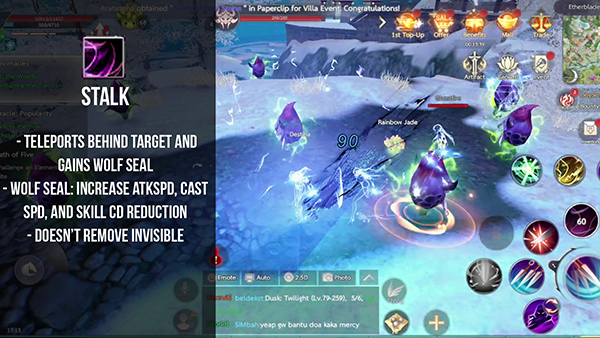 The stalk is great for 3 things. First is that it’s an evasive maneuver. It teleports you behind the enemy which makes it a great way to avoid attacks while setting yourself up for an attack of your own. The second is that it gives you the unique buff Wolf’s Seal which increases your attack and cast speed, as well as giving you cooldown reduction.

Lastly is that it doesn’t remove Invisible. This means you can Shadow Walk safely from afar, then Stalk into Decapitate or Lockmaw with little to no interruption. 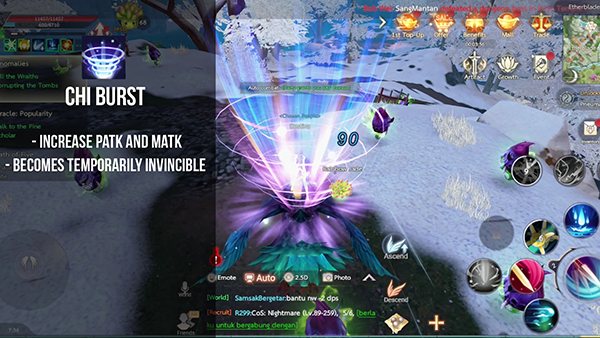 Chi Burst is a straight up buff. For the cost of 1 Chi bar, you get increased attack and invincibility for a short time. While this is a nice move early on, you’d find that Chi is a precious resource and it’s better used on better moves. While the damage boost is nice, you spend less time attacking, and you need every little second you have dedicated to doing damage (and avoiding it) so we’d rather you spend your Chi on Leaping Dash instead – especially in high-action dungeons. 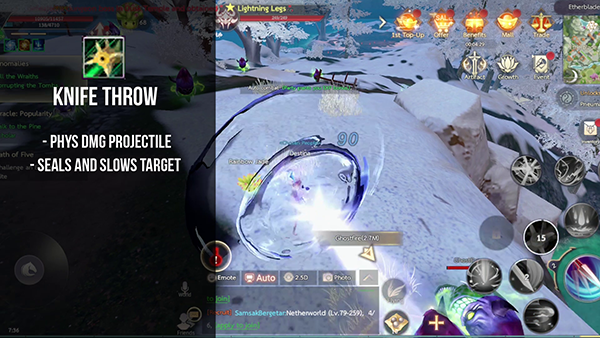 This move is funny since the name is knife throw but the description says you fire arrows. Anyway, Knife Throw is your only ranged skill that doesn’t move you toward the enemy. While it is niche, it is particularly useful in certain boss fights that have projectiles constantly surrounding them.

Knife Throw also seals and slows so it’s a nice pursuit move for enemies that like to move around or run away. 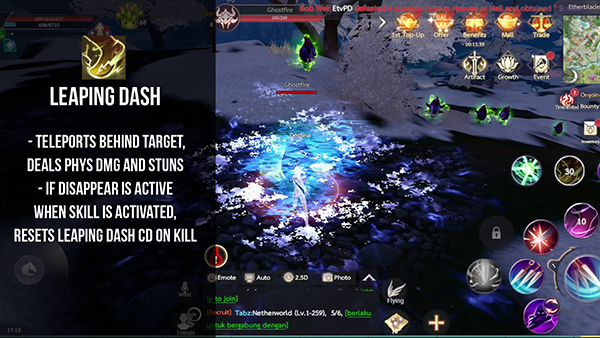 Leaping Dash is great as both DPS and an evasive move. I usually use it right away whenever I build 2 bars of Chi. Once you reach Sage, you ‘ll have access to damage boosts for this move which is a recommended must-max as soon as you can, especially if you want to reach the same DPS level as Archers and Wizards. 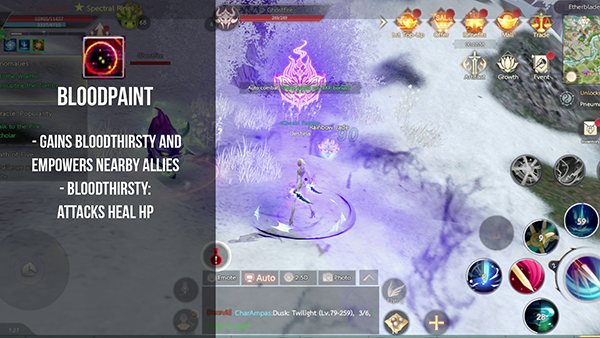 This is one of your better buff moves as an Assassin. It gives you Bloodthirsty and your party Slayer. Bloodthirsty allows you to drain HP based on your damage so there’s at least one built-in way for you to sustain yourself other than dodging.

Slayer on the other hand straight up increases your party’s damage, allowing better leech heals via Bloodthirsty, and overall better DPS for your entire party. 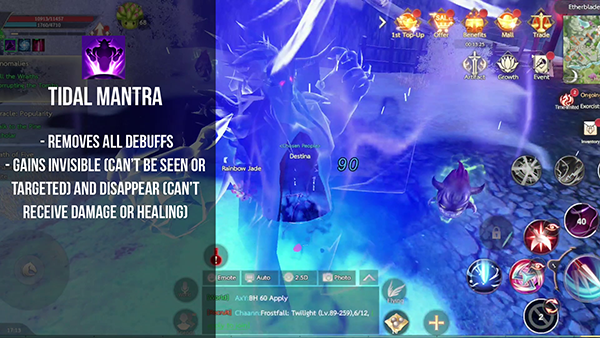 The third of your Chi moves, Tidal Mantra cleanses you of your debuffs then gives you Invisible and Disappear for a short period of time, which means you can’t be targetted, seen, or receive damage while the buff is active.

It’s a great way of reversing the tide when you find yourself CC’ed, but as it costs 2 Chi bars, it should only be considered when you don’t have a Cleric supporting you. As we said, chi is best spent on Leaping Dash.