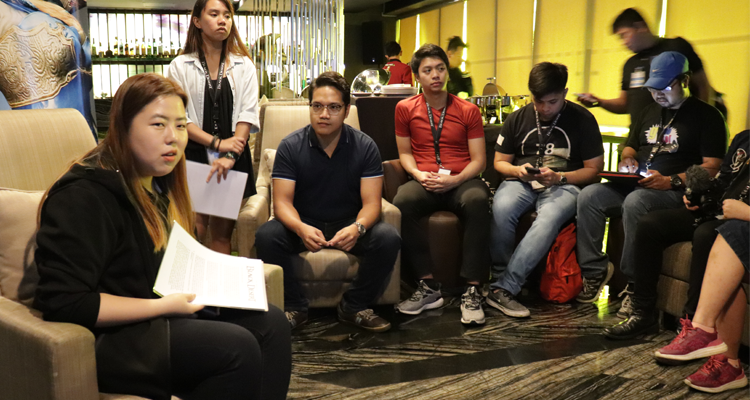 There recently concluded Voice of Adventurers event gave us a bit of facetime with Ginny Han, manager for Pearl Abyss as she answered some of the fielded questions given by us and some of the gamers present in the event. Here’s the canned Q&A questions that was given to us.

Most of the questions answered basically covers what’s going to happen to the game, what players can expect from the SEA server and what’s the esports future for the action MMO.

What is new for Black Desert Online?

A: We will continue to bring our Adventurers new content updates and exciting events. In fact, we have the new Valencia region opening next week. It is a vast desert land where
Adventurers can experience new patterns of playing styles, kill monsters in new hunting areas, and slay new world bosses.

In the long run, there are many more classes that have yet to be introduced. We’ve also prepared various PVP content and events for the future. We are trying our best to localize the vast amount of contents that we have prepared, and plan to release them at the best time. Our goal is to always provide a reliable service to our Adventurers.

What are your plans for SEA? and PH specifically?

A: I personally have a special affection for our Southeast Asia servers. First of all, we are discussing how to time the release schedule for the Southeast Asia servers to catch up with other regions’ as quickly as possible, because there are servers in other regions that have been out for a few years already. However, we want users to be able to fully enjoy all of the contents available and so that’s why we’re always reviewing the best timeline for the updates.

Our ultimate goal for the Southeast Asia servers is to be able to continuously keep Black Desert Online enjoyable and entertaining. We also plan to communicate with everyone in a variety of ways that we have not tried in Korea or anywhere else. Today is the first time I have been able to meet an Adventurer Southeast Asia, especially in Manila face to face. This is just the beginning, we will continue to work on being able to communicate with our users through various channels in the future.

A: Yes, we’re always open to new possibilities. However, it will probably differ case-by-case, depending on the proposing party. We know that it’s not easy to fully understand the situation here without the help of local partners. We usually do everything from development to publishing by ourselves, but partly get help from external sources. In fact, we prepared this event together with Elite, our partner firm, that runs our operations side. In Thailand, we are working with Level Up, our partner firm, who that runs our operations and marketing side.

As another example, we once held an event through hardware partnerships with MSI and NVidia in Taiwan. We are always on the watch for valuable collaboration opportunities in Southeast Asia.

Are we looking forward to tournaments or leagues?

A: Of course, Black Desert Online has a lot of PVP content and the one made for leagues and tournaments is the Arena of Arsha, which already we have ready. Since the Awakening updates were just recently added, we’re planning to hold a PVP competition once we feel that Adventurers have had enough time to better grasp their Awakened characters, new skills and combat style. We’re looking forward to being able to enjoy PVP events online and offline. We also want to let you know about what we’re thinking about in the long run. Although there hasn’t been any specific discussion yet, we are considering a global Arena of Arsha. I really hope that the day will come soon, when all of our Black Desert Adventurers from around the world can be brought together.

Is it possible to have a tournament server?

A: Yes, it is something we’re considering at the moment. However, since we’ve just started servicing the game and the introduction of the Arena of Arsha content itself is still in discussion, we can’t give you a specific answer at the moment. Thank you for your understanding.

What are your efforts to make the game appealing to non-paying gamers?

A: Black Desert Online is a buy to play game. You only have to purchase the game once and it is always there for you to enjoy.

Even though users can purchase other in-game items for  convenience, we don’t really force them to buy things.

Our primary goal is to make an effort in creating an environment where users who bought the game pass, can fully enjoy the contents of the game.

Our current system allows users to further customize their characters or enjoy more convenient gameplay by purchasing Pearl items. Adventurers can enjoy the game however they like.

The key point is to give everyone the freedom to decide, and to provide the appropriate level of convenience to those who do spend money. Every single user is equally important to us, regardless of whether they make purchases or not.

Esports is one of the fastest growing communities and industries in Southeast Asia and previous MMO’s have attempted to tap into it. Is there any interest into engaging further into esports? What would be the plans if so?

A: Like I’ve said before, we have the Arena of Arsha content coming soon to the SEA server. There are three modes to it: Round, Free for All, and Team Battle, and they all take place on a special combat map. Also, we are planning to create a PVP league officially hosted by Pearl Abyss. Users will also be able to host leagues using their guild funds, and the hosts will be able to invite non-participants as observer. We hope to see many esports events become active in the SEA server soon.

A: We recognize that we still have a lot more content to update for the Southeast Asian servers than we do for servers in other regions. Our goal is to get the contents caught up to the Korean servers as soon as possible. However, we are carefully making plans by considering our Adventurers’ content consumption speeds and overall experience satisfaction. We are hoping to catch up with the content of the Korean version after at least a year. We are actually updating content at a relatively fast pace. We will do our best to quickly update the content without hurting the overall game experience in Black Desert world.

Along with the big updates (such as new regions and characters), system changes, and bug fixes, UI improvements are being applied immediately the week after they are patched in the
Korean version. We will continue to make efforts to apply improvements as soon as possible so that everyone can enjoy a more convenient and enjoyable Black Desert.

Any chance of the data of how many classes are being used (how many Berserkers/witches/wizards are level 50+, 56+, 60+, etc) to be publicly available for viewing?

A: In today’s “100th Day Service Review”, I gave you a quick introduction of the data through the infographic, which tells you the class-related figures and percentages. The most used class amongst adventurers is Ranger at 12.1%, followed by Sorcerer, Ninja, and Warrior. The least used classes are Musa and Maehwa, as they were just recently added, I would assume that’s why there are relatively fewer of those classes.

Adventurer level information is constantly changing in real-time, so I can’t give precise information but in recent weeks, the rate of characters over level 56 has increased. It seems that these numbers have been affected by the Awakening updates that were implemented these last two weeks.

The April Fool’s event (wolves) showed server instability each time it occurred, save when it happens the same time as Kzarka, which caused lag issues. What are the steps being taken to improve these conditions?

A: Sometimes there’s lag and unintended server instability due to the overwhelming number of users enjoying the game. Although we spent a lot of time preparing the servers and the best possible service before the launch of the game, it still pains us to see that our users are still experiencing these issues. We’ve been monitoring the situation day and night, conducting tests and examining various ways to improve it so that we can at least help alleviate the issue. We are continuing to add and optimize servers to provide a more reliable game play experience.

Focus on the community is always great. What are the plans to further highlight the community of the game? Will we expect Black Desert events in conventions soon?

A: I absolutely agree with the importance of the community. Today, after meeting and communicating with users in person, I feel a greater sense of responsibility and pride. It made me feel like I have to work harder. We have always been interested in the feedback that the community has been providing us from the launch, but starting from today, we want to put more effort into communicating with our users and actively getting their feedback. Southeast Asia and Thailand are on the same timeline and so next week, the next “Voice of Adventurers” event will be held in Bangkok, Thailand. We will continue to plan these offline events to help create a space where we can freely communicate with our users. It’s doesn’t end here. We plan to visit many different places, have a variety of different events or even take part in large game shows. We hope to see everyone again soon.

So there you have it, that’s what players can expect from Black Desert Online! Do you have other questions you want Pearl Abyss to answer? Sound of in the comments!