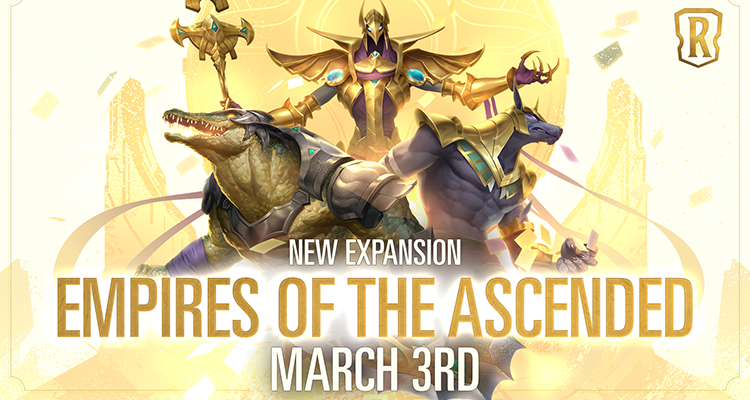 Riot Games SEA has announced the release date for the newest expansion, Empires of the Ascended, for the CCG, Legends of Runeterra.

The announcement of the latest expansion comes with its very cool trailer shown below.

Empires of the Ascended will bring 110 new cards to Legends of Runeterra, including nine champions and a Shurima, Runeterra’s desert-like region that’s a vast, mystical, ancient, brutal land that was once home to the most powerful empire on Runeterra which collapsed long ago. players to experience on March 3rd.

Slated for a March 3 release, Riot Games will be unveiling cards from the expansion daily through its social media channels until the release date.

You can check out the various social media channels for Legends of Runeterra here:

For people who are into the whole Runeterra lore, here’s the blurb of Shurima taken from the League of Legends Wiki:

The empire of Shurima was once a thriving civilization that spanned a vast desert. After an era of growth and prosperity, the fall of its gleaming capital left the empire in ruins. Over millennia, tales of Shurima’s glorious city became myth and religion among the descendants of the scattered survivors.

How excited are you with the upcoming release of the game’s biggest expansion to date?